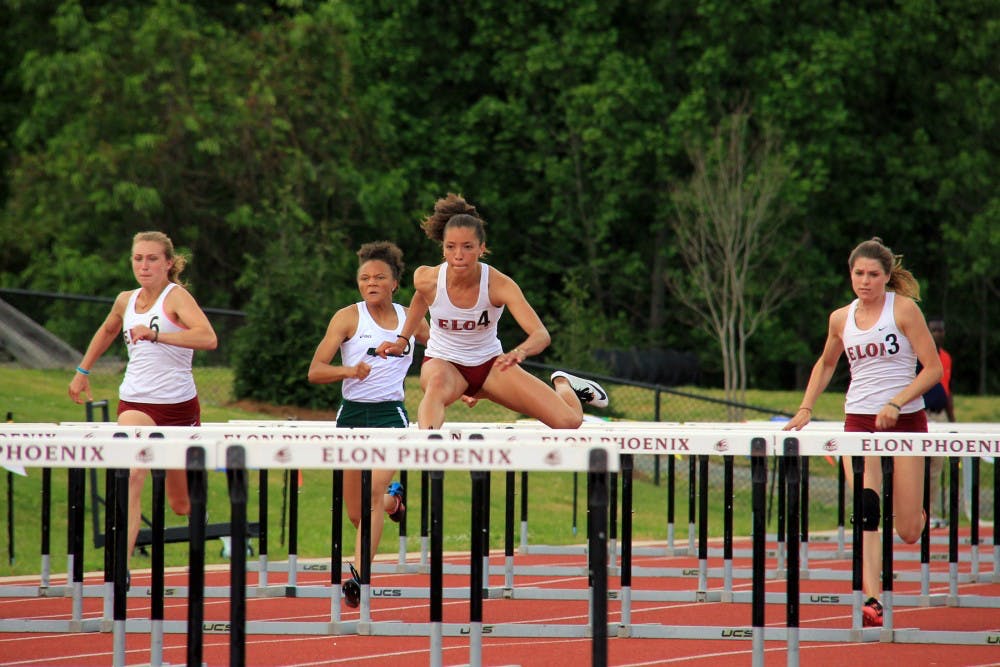 Mark Elliston, director of Elon University’s women’s track and field, has urged the Elon community to not miss the Phoenix’s defense of its Colonial Athletic Association (CAA) championship.

“What we’ve done through the year is get them ready for this very moment that we’re about to come to, and I believe they’re as ready as they’ve ever been,” he said.

Track and field picked up Elon’s lone conference championship last year in the debut season in the CAA, behind junior distance runner Kimberly Johansen’s Most Outstanding Track Athlete of the Meet performance. The Chelmsford, England, native won the 1,500 meter race with a CAA-record time of 4:22.82 and the 800 meter race with a time of 2:10.42.

But Elliston has had to pick and choose when to use Johansen because of nagging injuries from the cross country and indoor seasons. On top of that, Elliston said Elon hasn’t had the best of luck in terms of weather, forcing him to rest players instead of risking them in sub-optimal conditions.

Elliston said now is the time to unleash Johansen on the rest of the conference.

“She has been able to come on strong right here at the end,” he said. “It’s absolutely working out perfect with the rest of the group that’s really ready to do their best stuff at the big home meet.”

Redshirt junior distance runner Elyse Bierut said she’s noticed the atmosphere at the CAA meet is more competitive than the Southern Conference championship, pointing toward the 5,000 meters, which she’ll be competing in for the second straight year.

“Historically it’s been really competitive in the CAA,” she said. “Last year it took under 17 minutes to finish eighth.”

Bierut said she and the rest of the team will try to capitalize on the home field advantage Elon will get. She said she could see it coming to fruition during their last regular season meet at the Phoenix Invitational.

“It did feel similar to practice in that we’re competing on the same track and the same facility, but any time you have a real event it does feel a little different,” she said. “It was nice to have our meet here [April 23] to get in that mode on our home track and knowing we’ll be in that same mindset next weekend as well.”

Elon’s sprinters have also been in good form leading up to the CAA championship. Senior Jen Esposito has won five straight 400-meter hurdles races. The streak started in late March at the Raleigh Relays, when she was the lone runner finishing under a minute. She followed it up with wins at the High Point University VertKlassee Meeting, North Carolina A&T State University’s Aggie Invitational and the Campbell University Invitational.

Esposito’s latest win came on home soil, with a winning time of 58.51 at the Phoenix Invitational. The Mansfield, Massachusetts, native will also look to repeat her winning performance from last season’s 400-meter hurdles in the CAA Championship.

Despite entering as the defending championship and five consecutive wins under her belt, Elliston said Esposito’s best is yet to come.

“She’s been a hard worker [and is] doing a great job for us,” Elliston said. “It’s been unfortunate too, because her time isn’t reflective of what she can really do. I believe that’s coming very soon.”

Elliston said he’s seen the leadership and success of Esposito and other seniors trickle down throughout the roster. During Esposito’s two most recent victories in the 400 meter hurdles, the Phoenix swept the podium as sophomore Lydia Laws and senior Samantha Brown finished second and third respectively in each race.

Esposito will be the second leg of the Phoenix’s 4x100 meter team that broke the program record with a time of 46.52 in the Phoenix Invitational. The team shaved more than three-hundredths of a second of their previous best time — which was the third-fastest in school history — set earlier this year at the Raleigh Relays.

Senior sprinter Simone Jackson, who’ll hand the baton off to Esposito after running the first leg, said she and the rest of the team should feel more relaxed racing on the track that’s become a second home of sorts.

“We’re out on that track every day since September all the way through May,” Jackson said. “We’re very familiar with what our track feels like, what it looks like [and] where the handoffs are.”

Jackson said she and the rest of her 4x100 meter relay teammates — Esposito, senior Sydney Griffen and freshman Desiree Ross — have been spending a lot time fine-tuning their handoffs. Jackson is confident their speed is there, but they can’t overlook the importance of a mistimed handoff. A simple misstep could cost the team half a second, or an eternity in race time.

Bierut, filled with confidence following breaking Elon’s record in the 3,000 meters during the Phoenix invitational, said the team expects to defend its conference title.

“We set the bar pretty high for ourselves, which I think is great,” Beirut said. “It has especially helped motivate the newer people. They know that we won last year, and we expect to do that again.”