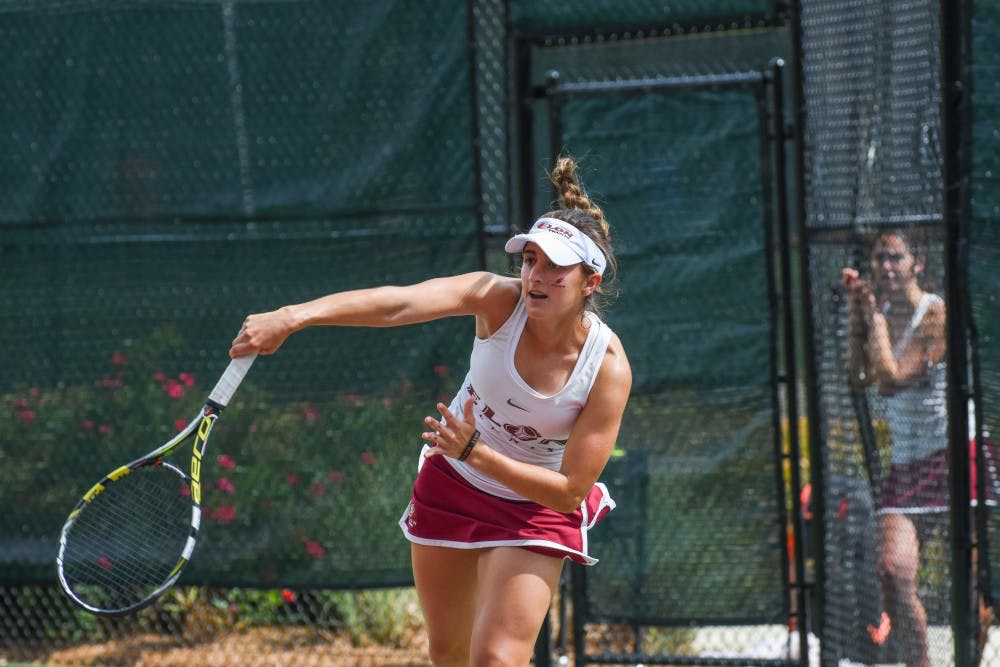 No. 3 seed James Madison rattled off three straight singles victories to stun the No. 2 seed Phoenix on its home courts.

“We were in it the whole time. They got the momentum going in their favor and they played well,” Anderson said.

Sophomore Kimmy Herrock cliched the victory at No. 3 singles with a 6-4, 7-6 straight sets victory over junior Natalia Janowicz.

In a repeat performance from the two teams’ meeting earlier this season, James Madison struck first by taking the doubles point. Freshman Suzanne Zenoni and sophomore Olivia Lucas started doubles play with a 6-2 victory over freshmen Emma Peterson and Bella Heidenreich at No. 3 doubles. But the Dukes won at the top two positions to take the doubles point.

Junior Timea Guilbe and Herrock tied things up with a 6-4 victory at No. 2 doubles over sophomore Erica Braschi and senior Taylor Casey. Minutes later, freshman Abby Amos and junior Rebecca Harris came back from trailing 5-4 to earn a 7-5 victory and seal the doubles point.

Elon tied the match at 1-apiece with the first win of singles play at No. 2 singles. Braschi made easy work of Rachel Nelson 6-2, 6-1 to earn her second victory of the tournament

“I did a good job setting the tone and being patient with [Nelson,]” Braschi said after taking the time to console her doubles partner Casey, who was overcome with emotions following the final match of her collegiate career.

Braschi said she hoped her individual win would swing momentum back in the Phoenix’s favor and that the loss will act as a “blessing in disguise” to give the team something to work for heading into next season.

But the Dukes retook the lead as Guibe knocked off sophomore Olivia Lucas in straight sets 6-4, 6-3 at No. 1 singles.

James Madison then extended its lead with a victory at No. 4 singles. Freshman Emma Petersen dominated in her second set tiebreak to clinch her 6-1, 7-6 straight-sets victory over Zenoni, before Herrock clinched the overall win.