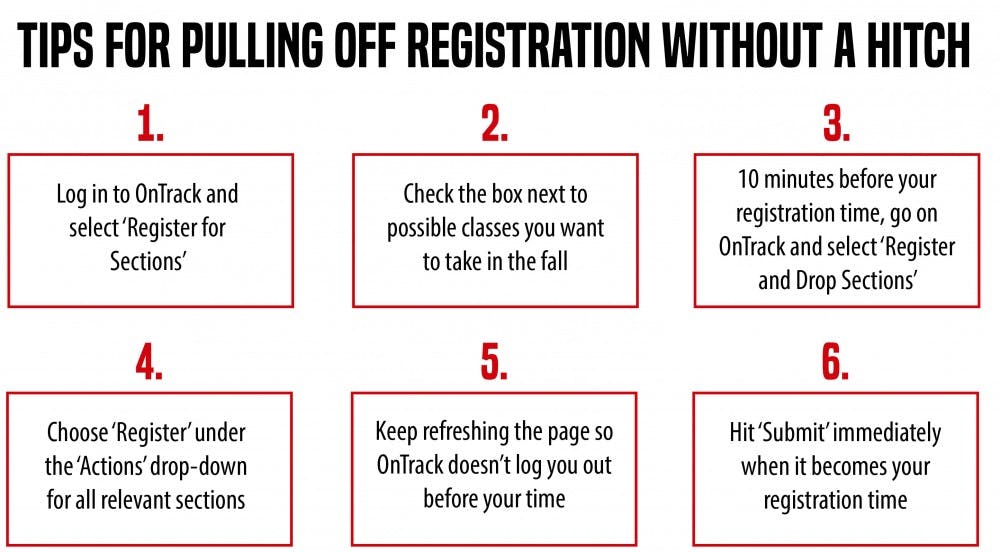 Selecting classes for next semester can be a major source of stress for college students, and Elon University is no exception.

The process of deciding what course description sounds most interesting, which professor is best, what time slots work for a certain schedule and what requirements are being fulfilled, along with a host of other factors, make the course selection process paramount to a smooth semester.

In the next few days, students will be awaiting their given registration times, hoping to check off more of the boxes in their degree audit. But Jim Donathan, associate director of Academic Advising and director of Academic Support, said the process doesn’t need to be overwhelming.

Working with Elon students for more than 20 years, Donathan is well-versed in giving advice on strategies for effective class selection. He encourages all students to do their research and stay on track, but also to study something they are deeply passionate about.

Donathan added his hope for students not to stress about crafting a perfect schedule — a schedule that is neither feasible nor existent.

When it comes to registration, it’s all about planning according to Donathan. Simple things like reading full course descriptions and reaching out to the professors teaching certain courses are steps that are too often overlooked, he said. Keeping an open dialogue on campus and speaking with other students who have previously taken a class of interest is equally useful.

Though the process can often create stress, it is different for students by class years. For rising sophomores, fall registration means re-evaluating possible career choices or majors that may have changed since they first enrolled at Elon.

Donathan said students who change their minds feel like they are behind if they have not yet taken required courses in their new desired field of study. His advice is to avoid comparing yourself to others.

“They should ignore the anxiety of other students who are creating unnecessary drama over the registration process,” Donathan said.

Sophomore Lily Mandell said she experienced drama after changing her major from theater studies to strategic communications at the beginning of this year.

“I thought it was my dream career path, but as soon as I realized that it wasn’t, it was hard for me to let go of it,” Mandell said. “Finding a new course was difficult and stressful, and I was worried it would set me back academically.”

Though she initially felt behind and overwhelmed by her decision, Mandell said it was the right choice.

“Elon really encourages following a passion while finding a career path,” she said. “I’m now more confident in my ability to graduate in four years and still be happy with my major.”

As a sophomore, Mandell enjoys freedoms that upperclassmen might not have. More specifically, the students approaching graduation are tasked with finding jobs rather than finding classes.

Donathan said he often meets with seniors who feel more stressed about what happens after they graduate Elon than what happens during the course registration process.

Questions that often arise from upperclassmen relate to how they have achieved their goals as well as whether they have studied abroad, completed an Experimental Learning Requirement (ELR) or received a faculty reference.

Overall, Donathan said he believes the process doesn’t need to be fraught.

It ultimately comes down to choosing courses that sound interesting or exciting and taking advantage of the hundreds of varying classes available. If stuck on what to choose, Donathan recommends taking a language course, taking an interdisciplinary course or simply taking an intriguing, creative course that goes beyond the traditional classroom structure.