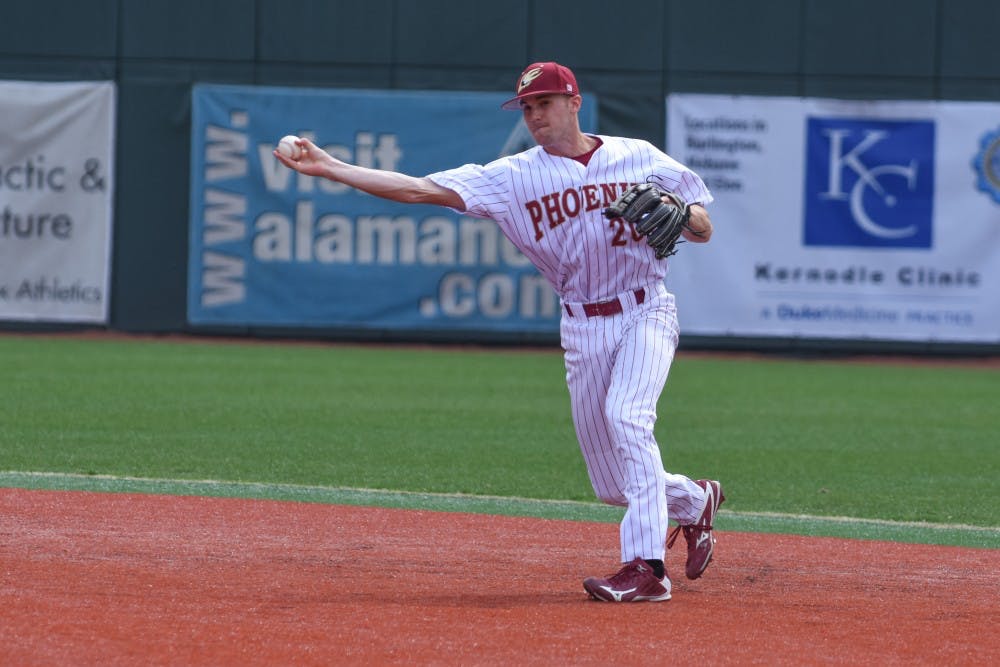 “When we need to, like in that last inning right there, we came through. For us individually, that gives us a lot of confidence going forward,” said senior first baseman Danny Lynch, who drove in the game-winning run with a single up the middle. “Nice is an understatement. We really needed a win, especially in conference.”

After Lynch drove in junior third baseman Nick Zammarelli to put the Phoenix in front, fellow junior second baseman Kory Shumate extended Elon’s lead to 9-6 with a two RBI triple into the right center field gap. Even though Shumate entered the game as a defensive replacement in the 8th inning, it was his bat that provided the spark of the bench.

“I didn’t feel a lot of pressure, I knew we had the lead and I had a plan, I stuck to it, swung at a ball in the zone, got lucky and hit a triple,” Shumate said. “Kyle battled through that at bat and hustled down the line and kept us in a ball game. Then Lynch stepped in there aggressive and ready and I did the same thing behind him.”

Junior catcher Nick Roper drove in what looked like to be the winning run with a RBI single to center field in the top of the seventh inning. Elon head coach Mike Kennedy elected to intentionally walk the batter in front of Roper, senior centerfielder Morgan Phillips, to set up the lefty vs. lefty between Roper and junior pitcher Jordan Barrett, but Roper got the best of the southpaw matchup, hitting his second single of the game.

Elon responded with a run on freshman shortstop Liam O’Regan’s looping single out of the reach of Hart which scored senior third baseman Danny Lynch, who led off the frame with a double. The Phoenix then tied the game at 4 apiece when senior starting pitcher Nathan Helvey lost the strike zone, walking junior designated hitter CJ Young, Zammarelli and Jackson consecutively with the bases loaded.

Kennedy said he was pleased to see his team get a win despite not playing its best and didn’t get down quickly when Charleston took an early lead.

The Phoenix and Charleston will continue their series at 4 p.m Saturday.