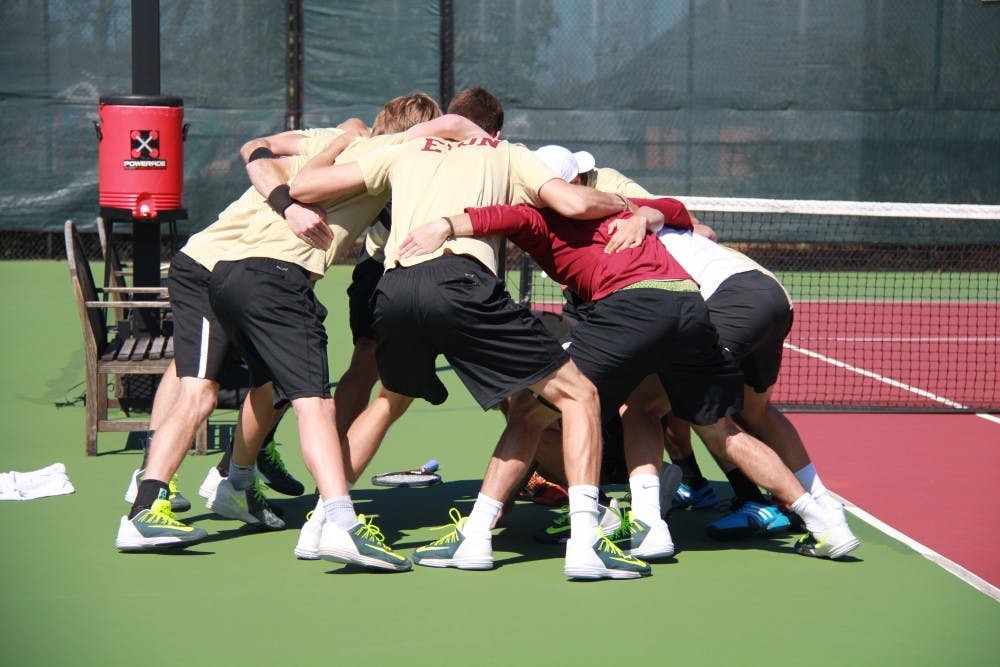 Freshman Salvador Mijares hasn’t wasted any time making his mark for the Elon University men’s tennis team since arriving on campus this January.

The Puerto La Cruz, Venezuela, native boasts a 5-3 record in singles play, including a win over North Carolina State University’s sophomore Shoti Meparidze when the Wolfpack were No. 40 in the Intercollegiate Tennis Association (ITA) Rankings.

“My specialty is in singles, so I have to work really hard on other things,” Mijares said. “But I’ve actually surprised myself with the level I’m playing at and the amount I’ve improved.”

Mijares was thrown into action just weeks after arriving at Elon. He was one of two Elon players to win at least a set against No. 13 Duke University — taking the second set in a loss to second Josh Levine at No. 5 singles 6-2, 3-6, 6-2.

Mijares is one of six true freshmen on head coach Michael Leonard’s roster. Leonard said his team is a little ahead of schedule in singles play and gives credit to the freshmen’s competitive attitudes during practices and matches.

“Sometimes having a young team can help because they don’t know any better. They don’t care who the other team is,” he said.

“VCU’s been ranked pretty much the whole time I’ve been coaching, but that doesn’t faze them,” he said.

Mijares lost his match against VCU’s freshman Victor Lima at No. 4 singles, but was given a valuable lesson on the kind of atmosphere to expect during a closely contested college match. A dual match is a unique tennis environment, with coaches moving between courts and players cheering on from the sidelines, or their respective courts in between points.

The Phoenix led VCU 3-2 with a pair of singles matches still being played. Senior Robert Lindgren then lost at No. 3 singles, forcing a take-all match at No. 5 singles between Elon junior Chris Humphreys and freshman Arvid Noren. Humphreys had taken the first set, but trailed 5-4 in the second. Humphreys held serve twice and broke Noren once to win 6-3, 7-5 and clinch the win for the Phoenix.

“This was my first [dual] match that we won on a deciding-match, and that’s the feeling you expect from college tennis,” Mijares said after the victory.

Mijares said he and the rest of the freshmen are constantly asking questions and taking advice from the older players, such as Lindgren and Humphreys. Humphreys said the freshman class is a particularly motivated one, but he reminds them to play to the best of their ability.

“It’s great having these new guys around,” he said. “All the guys on the team feel like they have something to prove, so everyone’s just super motivated and super hungry to win.”

While Leonard was unable to explain why his team is so close despite not being together for very long, Humphreys said it’s the common goals of wanting to prove their own individual talent as well as achieve the team-oriented goal of winning a Colonial Athletic Association (CAA) championship.

Mijares added having teammates to speak his native Spanish with doesn’t hurt either.

“[Freshman] Felipe [Sarrasague] and I are from the same continent,” he said. “I mean, we share the same language.”

Sarrasague hails from Buenos Aires, Argentina, and has won three out of his last four matches — all from the No. 2 singles position. With fellow freshman and Spanish speaker Mario Paccini also winning two of his last three singles matches at No. 1 position, Humphreys said the Phoenix is poised to turn some heads.

“I see these guys, they are so loud and ready to show everyone how good they are, because nobody knows anything about us,” he said.