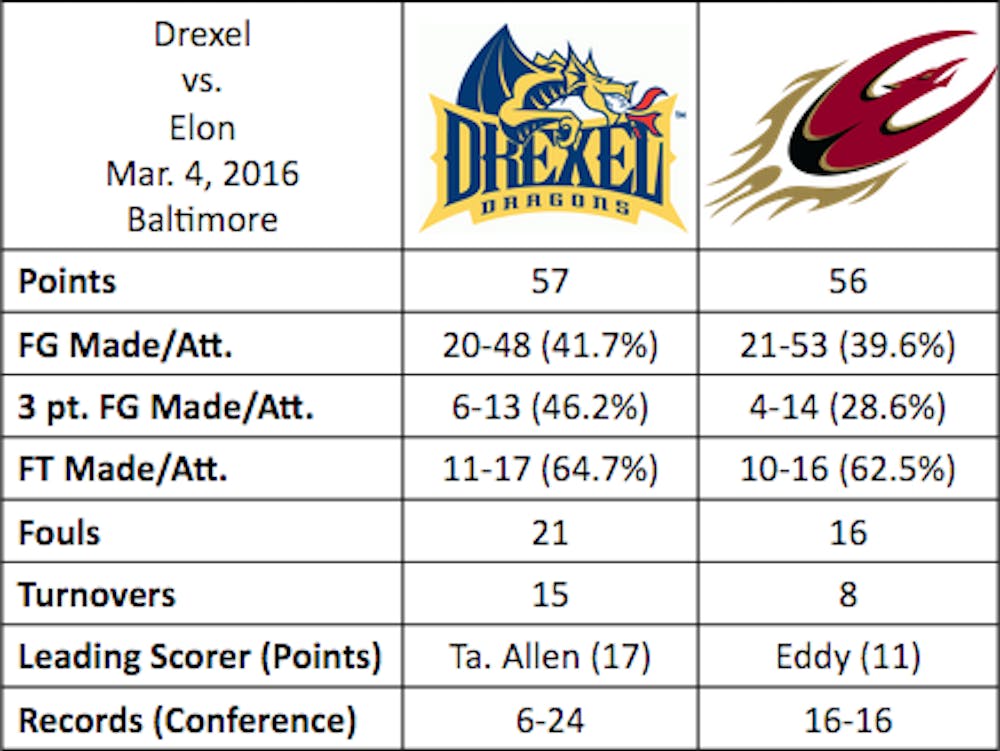 BALTIMORE — The Elon University men’s basketball team’s season lay in the hands of junior guard Luke Eddy. After smartly calling a timeout with 13 seconds left to set up the final shot, the ball found its way to his hands.

But Eddy rimmed out on what would have been a game-winning jumper as Drexel University came out with the 57-56 victory in the first round of the Colonial Athletic Association (CAA) tournament.

“It was a ball-screen for me and I was trying to get two points,” Eddy said. “I could have done anything, that’s how most of our end-of-the-game plays work. And it didn’t happen. I left it short.”

The previous possession, Drexel's freshman guard Terrell Allen scored the deciding basket — two of his 11 points —  with a jumper with 25 seconds remaining.

Drexel's senior guard Tavon Allen led all scorers with 17 points off the bench. Eddy was the lone Elon player in double figures with 11 points.

The Phoenix lost its shooting touch late in the second half. After Eddy’s layup gave Elon a 55-51 lead with 5:51 left in regulation, the Elon scored just one point and missed its last six shots from the field.

“I thought we got good shots down the stretch. They just didn’t go in,” Eddy said. “It’s the same shots we got all throughout the game and at the end they decided not to go in. That’s basketball.”

Elon took its first lead of the game with 11:20 left in the second half. Junior forward Christian Hairston's tip-back on Samson’s miss fell right to the wide-open freshman guard Steven Santa Ana who connected from behind the arc to give Elon a 44-43 lead.

Though the lead lasted just 34 seconds. Junior forward Rodney Williams converted an and-one to put Drexel back in front 46-44.

Freshman forward Tyler Seibring hit a three-pointer to put Elon in front 53-51. Eddy finished at the rim on Elon’s next trip down the floor to extend the Phoenix’s lead to its largest of the game – four.

“When we were chipping away in the second half and eventually took the lead, I think as a team, we thought that we could finish the game,” Hairston said. “Obviously [Drexel] didn’t quit. They made a run to start the game, we made a run and eventually it just came to blows at the end of the game.”

The Phoenix started the second half with a brief 6-0 run to cut its Drexel’s lead nearly in half. After closing the first half with a basket, redshirt sophomore forward Brian Dawkins finished at the rim, followed by consecutive baskets from Eddy to pull Elon to within 34-27 with 17:30 left in the second half.

“I felt like if we could play well in the first few minutes of the half it’d be a great game, and we did,” said head coach Matt Matheny.

Drexel started the game on a 10-0 run, forcing Matheny to call a quick timeout. After Santa Ana put Elon on the board at the minute mark, Drexel went on another 8-0 spurt to extend its lead to 18-2.

Matheny said he wasn’t surprised by how well Drexel played out of the gate, citing the two team’s close contests during the regular season. But he still didn’t expect Elon to trail by 16 that early in the game.

“It can happen. I’ve seen it happen. I’ve been a part of both ends of that,” Matheny said. “But yes, I was surprised at how bad it was at the beginning for us.”

Drexel's sophomore guard Sammy Mojica scored an old fashion three-point play after grabbing an offensive board, followed by Allen’s three from the right wing to give the Dragons its 16-point advantage.

Drexel tied a season high by extending its lead to 17 points later in the first half. Allen hit one of his four first-half threes to give Drexel a 29-12 lead at the 7:14 mark in the opening period.

Dawkins’ close-range finish cut Elon’s deficit to 13 enter halftime. Elon’s 21 first half points ties a season-low for points in a half, matching the second half of Jan. 23's against James Madison University.

With the loss, Elon wraps up its season at 16-16. Drexel advances to the quarterfinals of the CAA tournament with the win and will face top-seeded Hofstra University at noon March 5.