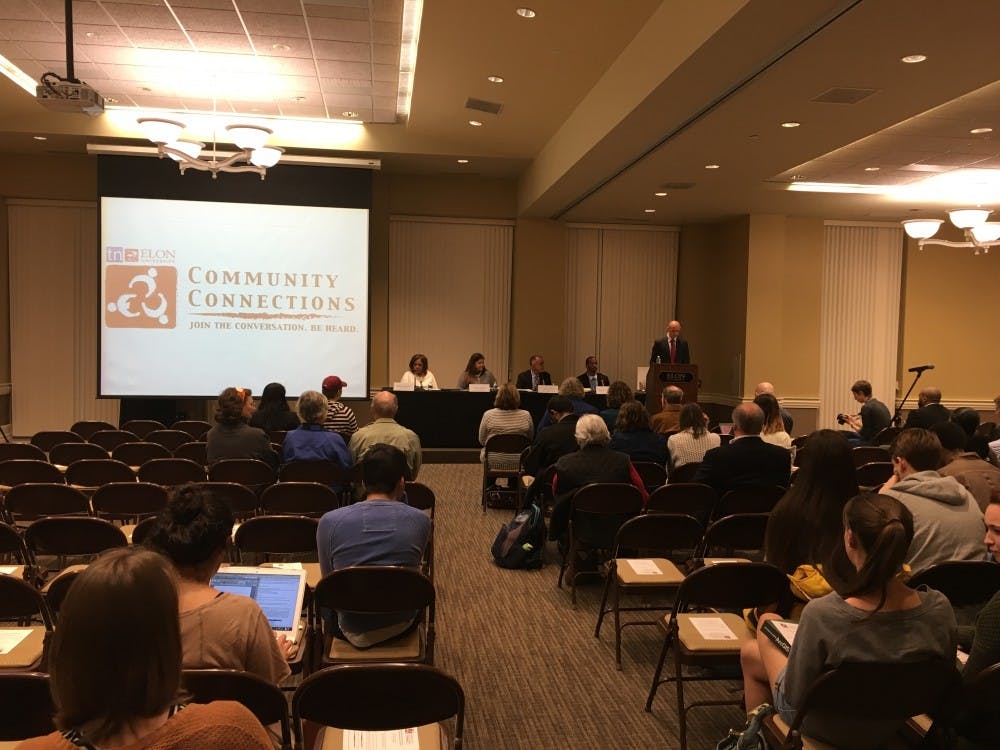 "Race is the number one predictor of outcomes in the United States of America," Presidential Fellow and Special Assistant to the President, Randy Williams said introducing a major theme of Monday's Community Connection.

Ethnicity and gender were just a few topics discussed at the third and final Community Connections Forum held Monday, March 7 in McKinnon Hall. Education, Race and Ethnicity in Alamance County & Beyond was the topic for the discussion in which Faculty Fellow for Civic Engagement and Assistant Director of Elon Poll, Dr. Jason Husser, moderated a discussion with four panelists.

One of the main points addressed was addressing the challenges with diversity, especially in ABSS.

"There are many disparities amongst blacks and whites in advanced education programs and the level of education they receive," Simpson explained.

Giving the construct of race the respect it deserves is one thing Williams added to the discussion.

"We glorify [race] through Disney films and not actually describe the harsh realities of the race establishment," he said.

Still, figuring out how to have race equality is tricky. With the ABSS redistricting into four corners there are bound to be neighborhoods divided and schools overpopulated. For example, Simpson says that Eastern and Southern Alamance High Schools are already overpopulated. But she urges the ABSS residents to express the changes they want to see in their school system. And redistricting begins by having those in power not gerrymander district lines.

"We need to educate ourselves as to who is on our ballot then go out and vote," Simpson says.

But the issue of race is not just black and white.

One community member asked, "Why do we focus so much on English programs when it may be beneficial for students to learn in their native language?"

"I think the more diverse a society is, the richer it is," Valera says "So we have to find a way to give an assessment where language isn't a barrier."

Valera suggests that on average it takes a person three to five years to proficiently learn a language then another couple of years to be able to apply that language academically.

But race discrimination of any kind is not innate one panelists suggests. "Racism is learned. Children don't see a difference until it is pointed out," Theall says.

"Racial disparity is not a black or Hispanic problem; it's an 'everyone problem'" Theall says, "We need to look at the root of that problem"