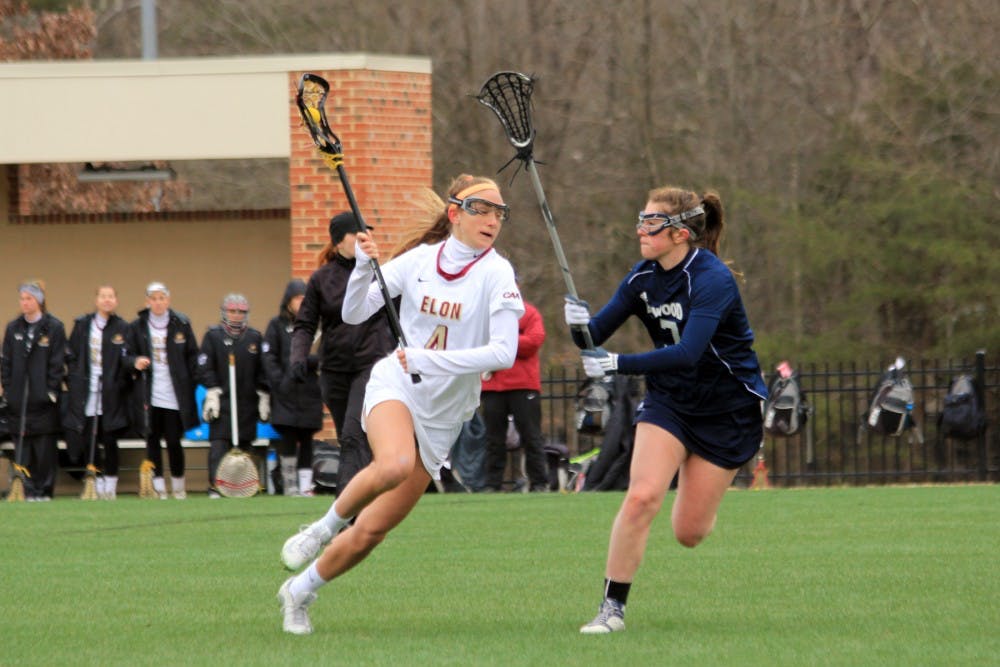 Down a pair of goals in the second half on the road to Coastal Carolina University, the Elon University women’s lacrosse team didn’t waver.

After sophomore midfielder Abby Godfrey scored her second goal of the game to put the Phoenix within one, junior attacker Sloane Kessler scored the game-tying and game-winning goals in the span of 1:04 to give Elon a 5-4 comeback victory and a 3-0 record to start the year.

“We were a little bit off in a lot of respects,” said head coach Josh Hexter. “In a game like that we told the [players], ‘It’s the team that can play loose in a one-goal game and takes some risks that’s going to win.’ And we did that.”

Kessler’s match-deciding goals were her ninth and 10th of the season. While Kessler has proven more than capable of creating chances for herself and her teammates, the Owings Mill, Maryland native said she’s been focusing on improving the physical aspects of her game.

“Speed and quickness are two of the things I wanted to work on, along with my footwork,” she said.

Kessler said the team is full of players capable of scoring and contributing on offense. This season, eight players have scored Elon’s 31 goals.

“Everyone’s been really selfless — there’s a mix of players that are scoring,” Kessler said. “You look at how many people that can score, we have so many threats this year.”

Kessler said she is a benefactor of the Phoenix’s balanced offense but admits the system can work with anyone running the show, though Hexter said Kessler brings an extra something that makes Elon’s offense click.

“She brings a particular poise to our offense that I love,” he said.

Hexter added Kessler does what all other great players do — improve the game of those playing around her. Kessler led the Phoenix in assists in each of her first two seasons, with 21 assists in 2015 and 22 in her rookie season. Kessler’s 1.31 assists per game in 2015 was the 47th best in the nation.

The Phoenix will not have an easy time extending its undefeated start to the season. Elon travels to face No. 12 Duke University — a final four participant last season — Thursday and Vanderbilt University Sunday. Kessler said her teammates know how close they are in terms of talent after playing Duke last year and Vanderbilt this past fall.

“Regardless of who we play, the focus is always on us and what we’re trying to get better at,” he said. “Then we try to play the best opponents we can to try and raise our own level of play. The opponent for us is somebody that’s gonna help us get better. If you’re gonna play against teams that are not very good, that’s not gonna help you elevate your game.”

The next home game for the Phoenix is at 6 p.m. March 4 against the State University of New York at Albany.