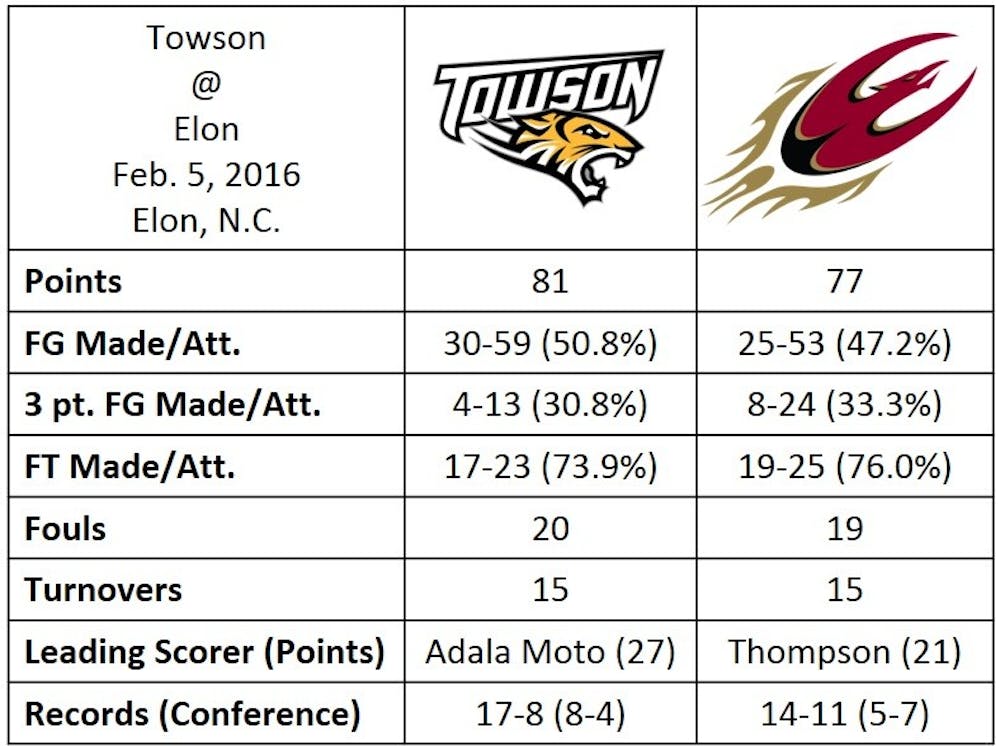 It was a case of too little, too late for the Elon University men’s basketball team in its 81-77 loss to Towson University Feb. 6 in Colonial Athletic Association (CAA) play.

Junior guard Luke Eddy’s floater with six seconds remaining was blocked by senior forward Timajh Parker-Rivera’s finger tips, which would have tied the game. Sophomore guard Eddie Keith II hit a pair of free-throws at the other end to put the game out of Elon’s reach for good.

"You have one of your better players, one of our better offensive players, attacking the rim down two in the last 10 seconds, you can't complain," said head coach Matt Matheny

Junior forward William Adala Moto led all scorers with 27 points while grabbing eight boards – one of four players in double figures for Towson.

“You can technically be correct defensively and he can still make a play, that’s the sign of a really good player,”  Matheny said.

Sophomore guard Dimitri Thompson led the way for the Phoenix scoring a season-high 21 points, matching his tally against the University of North Carolina at Charlotte on opening night.Thompson credits Elon’s threat from beyond the arc to clear up space inside for him to drive into.

“It’s always fun to play against teams that are aggressive because you live to play all the time," he said.

Freshman guard Dainan Swoope was the only other player in double figures for the Phoenix. Matheny said Towson’s physical defense made it difficult for Elon’s shooters.

“They did a really good job hugging our shooters,” Matheny said. “The game is different now and you’re not allowed to screen the way you have in the past.”

Towson used its size and strength to grow its lead in the second half. Towson grew its lead to double-digits thanks to a 9-0 run behind a pair of scores from both junior forward John Davis and senior forward Timajh Parker-Rivera. Each of layups – one was an and-one – was with authority driving through what proved to be very movable Elon defenders’ bodies.

Matheny said he wanted to defend aggressively by making Towson’s players uncomfortable when driving to the rim. He though while Elon “backed off” in the second half, Elon found success in the opening 20 minutes.

The Phoenix extended its lead to five midway through the first half with a pair of hustle plays. Freshman guard Sheldon Eberhardt sprinted the length of the floor to hit a wide-open three in transition. On the next possession, senior guard Luke Eddy drove hard to the basket late in the shot clock to give Elon a 16-10 lead at the 9:42 mark of the first half.

A three-pointer from sophomore guard Eddie Keith II gave Towson its first lead since the game’s first basket, but freshman forward Karolis Kundrotas quickly put Elon back in front with plays on both ends. The Lithuanian came from the weak side to reject Timajh Parker-Rivera’s put-back and followed it up with a three-pointer from the top of the key on the next possession.

Despite leading nearly the entire opening period, Elon headed into halftime trailing. McNeil put Towson ahead 38-35 with just over a minute left, but senior guard Tanner Samson answered seven seconds later with a three of his own. Towson answered right back as Morsell hit another three to put Towson in front 41-38 heading into the locker room.

“In the first half we turned the ball over too many times…we turned it over 11 times,” Matheny said. “To prepare and defend well in the first half and be down was disappointing because I thought our guys were locked in we just didn’t value the basketball.”

The Phoenix returns to action with a road matchup at 7 p.m. Feb. 11 at in-state rivals the University of North Carolina at Wilmington. UNCW defeated Elon 91-82 during the teams meeting earlier this season.