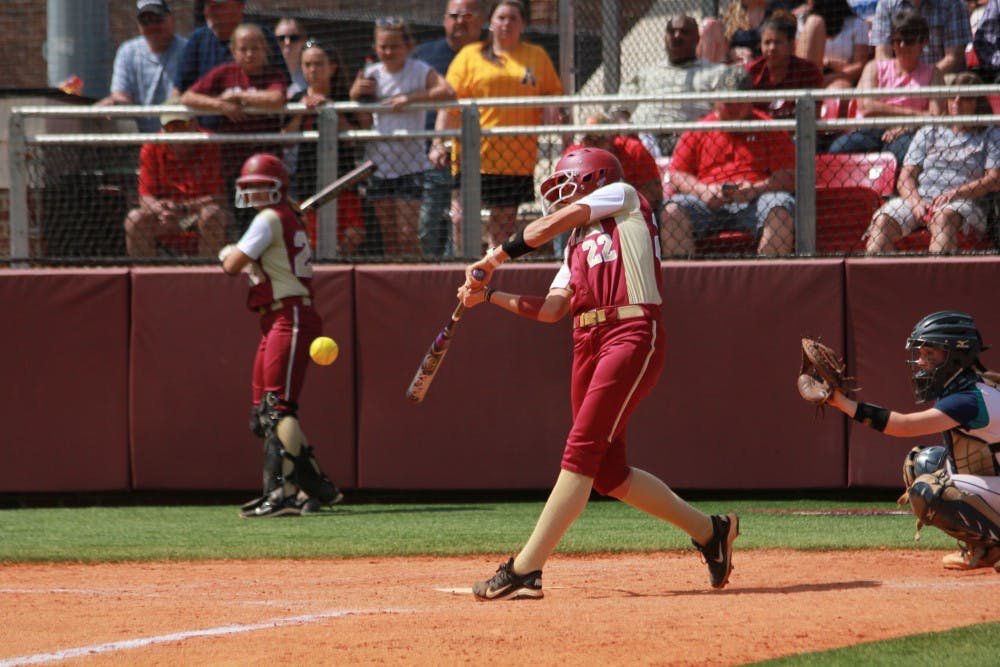 
Senior outfielder Emily Cameron (22) lines a single against the University of North Carolina at Wilmington May 2, 2015. Elon won 4-3 to sweep the Seahawks.

“I’m not afraid to schedule the best,” Bocock said. “Because if you want to be the best, you have to play the best. And we really did.”

The Phoenix returns to Athens, Georgia, to open its season in the University of Georgia’s UGA Red and Black Showcase.

“We’re preparing harder knowing that we played [Georgia] last year,” said junior catcher Carey Million. “The biggest thing is knowing that we can compete with them and just going and playing our game, and if things get out of hand, to stay within ourselves.”

The Phoenix looks to remain competitive with the Southeastern Conference powerhouse after suffering double-digit losses against the Bulldogs — losing 14-4 and 10-0.

Elon will play double-headers Feb. 12 and 13, facing Winthrop University and Georgia, who open the season ranked 12th in the preseason USA Today/NSCA Coaches Poll after ending last season being swept out of a super-regional by the University of Michigan.

After a home opener against North Carolina A&T State University, Elon will take part in the Citrus Classic, where they’ll face the defending national champions University of Florida in Orlando.

Bocock said the team’s reaction was positive when she announced they would be facing Florida — far cry from years past, when Bocock said players would be slightly intimidated or nervous over the prospect of playing top teams.

Senior pitcher Kayla Caruso said she’d like to close out her Elon career with a Colonial Athletic Association (CAA) championship.

“We came close last year, and the closest we’ve ever been since I’ve been here,” Caruso said. “So things are going in the right direction, and I hope they continue to move that way.”

Caruso went 12-5 last season with a 2.62 ERA. Without an overpowering fastball, Caruso is quick to give credit to those playing behind her.

“I rely a lot on my defense. We have a really good defense and we’re very supportive too,” she said. “I can pitch to contact all that I want, but if I don’t have them behind me, it doesn’t mean anything. They’re the reason I’ve been so successful.”

Million said she’s seen Caruso grown into the leader of the pitching staff. Even though Caruso is not a high-strikeout pitcher, Million said the senior is a good example to younger pitchers to rely on all of their pitches.

“She has a lot of different pitches that work. She mixes planes, speeds and you really don’t know what to expect with her,” Million said.

While Caruso led the team in wins, it was sophomore Kiandra Mitchum who led the Phoenix in innings pitched last season.

The Mechanicsville, Virginia, native logged 107.1 innings in her debut season. Bocock wasted no time giving Mitchum game time. After debating with her coaching staff before last season’s opening day against the University of South Carolina-Upstate, Bocock decided to give left-handed Mitchum the ball.

While the assistants were worried about starting an inexperienced freshman on opening day, Bocock thought Mitchum could stifle a powerful Upstate offense that struggled against left-handed pitching.

“I was like, ‘We’ve got to do what we can do to win and what better chance [for Mitchum] to understand how this all works,’” Bocock said. “She took the mound, and you would have never known she was a freshman. She was so engaged in what she was doing.”

Mitchum threw a complete-game six-hitter as the Phoenix came away with a 4-3 victory.

Million said it wasn’t always that easy for Mitchum, and the two worked together to form a strong battery partnership.

“She learned the reality of college softball quickly, but she’s a fighter and works really hard so I think that lit a fire under her,” Million said. “She throws a hard ball, so she will get girls on swings [and misses], but she also has a lot of dirty pitches that can make girls look bad at the plate.”

Bocock said she’d like her team to align with her offensive philosophy going into her fifth year at the helm.

“In the past we haven’t really won games, but we’ve hit home runs or whatever, but that’s not really who I am as a coach,” Bocock said. “We have to produce runs ... If you’ve got speed, you can play the short game.

“Then you can have the people who can have opportunities to — if it’s a mistake — hit the ball over the fence. That’s a lot of options for us.”

Junior outfielder Alaina Hall gives the Phoenix speed and flexibility with the bat. Hall, a second-team All-CAA selection, had a team-high .358 batting average, typically hitting in the No. 2 spot in the batting order.

Hall said her primary role is to move runners along into scoring position. With only 12 walks and 17 strikeouts last year, Hall wastes no time in the batter’s box to make things happen.

“I don’t get walked that often because, as a slapper, most people don’t want fast people on,” Hall said. “So they usually give me things to hit.”

Hall is unsure what Elon’s offensive identity will be going into the season.

“It’s going to be a surprise, but I know we’re fighters and we’re going to be scrappy,” she said.