Phoenix gives up 11 in first half, builds lead up to 38 in balanced victory 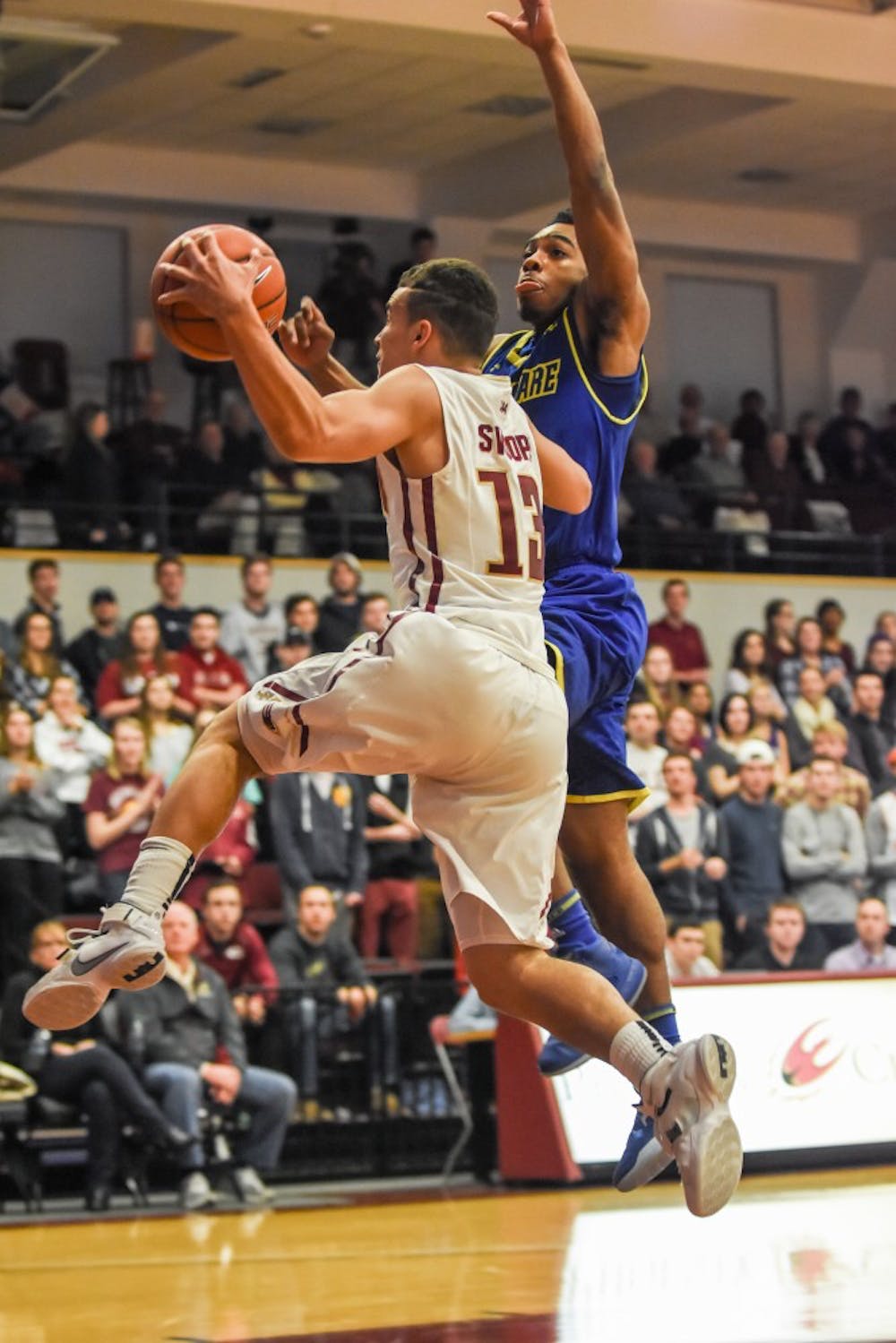 
Freshman Guard Dainan Swoope goes up for a reverse-layup in the first half against the University of Delaware Feb. 5. He made the layup, and Elon won, 83-56.

The Elon University men’s basketball team did what it should do, beating the winless-in-conference University of Delaware 83-56 Thursday night in Colonial Athletic Association play.

“That’s pretty big time,” Dawkins said. “I think it all goes to the preparation we put in all week through the scouting to be ready for those guys. They’re great players, and good players in this league, and we put a lot of emphasis on team defense and it showed tonight.”

Elon continued playing stingy defense well into the second half, as Delaware only scored eight points in the first eight minutes of the second stanza, for a total of 19 points after 28 minutes. Junior guard Luke Eddy said the team knew it had to built off its 20-point halftime lead, getting the lead as high as 38 at one point.

“We knew the first two minutes out of halftime were going to be huge in how the rest of the game was going to go,” Eddy said. “We were really locked in, and out of the locker room, we came ready to play.”

“Our point guards have the ball in their hands a lot, and we’re not opposed to taking transition shots, so in that offense, point guards get a lot of the assists,” Matheny said. “But then, in motion, there’s not set spot for our post players to go. It’s all read-and-react. So you need bigs that can pass the ball.”

The scoring was a balanced effort for the Phoenix (14-10, 5-6), as junior guard/forward Christian Hairston and Dawkins tied for the team-high with 12 points each. Elon scored 42 of its 83 points in the paint, showing a strong inside presence that makes up for a poor performance from deep (6-22 3-point shooting).

“When you have the guys [we have], it is an emphasis for other teams [to stop the 3-point shooting],” Dawkins said. “If they get open looks, they’ll make their shots. Teams do take that as their emphasis as their way to stop us, so getting good looks inside helps us, and also opens up so the shooters get better opportunities, where they’re not being hounded by guys on the perimeter.”

Dawkins was one of four players to set or tie a career-high for Elon, as Patrick Ryan set a career-high with four points on two baskets. The two who tied career-highs were senior guard Sam Hershberger with six points and freshman guard Sheldon Eberhardt with five points.

“Being able to see Sam, [junior] Wes [Brewer, who made a basket] and those guys go out there and get on the scoreboard [was my favorite part],” Hairston said. “We know those guys work their tails off, and spend most of their time being another team or guarding us. They don’t really get much credit, so any time they get to go out there and play, we’re really pumped up for that.”

The Phoenix finishes its two-game week with another home game, facing Towson University at 6 p.m. Saturday. The game will be broadcasted on the American Sports Network.