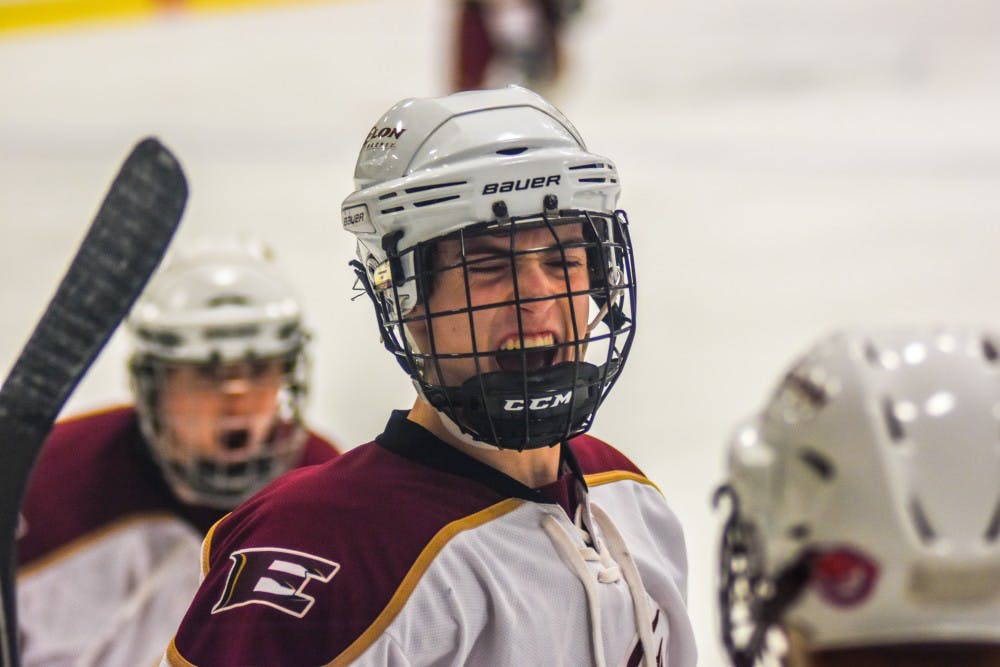 HILLSBOROUGH — It’s 11:30 p.m. on Wednesday, Jan. 13, but it could be any Wednesday. For most Elon University students, it’s time for bed, studying or Netflix.

But for freshman Drew Waetjen, it’s time to set up the goals on the ice rink at the Orange County Sportsplex so Elon’s club hockey team can start practice.

It’s a typical freshman duty, but an atypical time for a practice. Yet it’s all the Elon hockey team knows.

“We’re just trying to get as much ice as possible,” Waetjen said.

Waetjen, who spent a year playing junior hockey in Texas before he got injured, and is physically the biggest player on Elon’s team. He followed his brother Ryan ’15 to Elon, using a deferred admission after his year in juniors, and loves the environment surrounding the hockey team.

And it’s a unique environment for the 40 players on the Elon club hockey team.

Through the late night practices, grueling game schedule and the toll that the sport of hockey puts on the body, the students play at Elon because they simply don’t know what they’d do without it.

From men’s league to organized club

For many years, Elon students interested in hockey have always found ways to play by participating in a men’s league in Greensboro.

In 2011, the students applied to become an official university club team and were approved. After playing a season in club hockey without a coach, the students in charge of the club decided they wanted to find coaches.

Paul Cormier and Rich Arnesen had both played against the students in the men’s league in Greensboro, and both had a passion for coaching. The student leaders ran the interviews, letting potential coaches pitch themselves to the players they would coach.

“It was different,” Arnesen said. “I treated it like it was any other interview, but it was different because it wasn’t one-on-one — it was a group interview. They went to specific guys [in the men’s league] and asked if they wanted to interview for the job.”

Cormier founded his own company, WinCorp Software, in 1995 and is the president and CEO to this day. The Raleigh resident was picked as the head coach by the student leaders, and hasn’t found it difficult to coach them.

“It makes it easier, because kids I didn’t coach had their own styles and ideas,” Cormier said. “As I continued to coach the kids — first year, second year, third year — they started knowing the systems I wanted them to see, the levels of discipline I wanted them to maintain, and we all got more and more on the same page to play competitive hockey.”

Arnesen works as a plumbing estimator for AC Corporation and lives in Greensboro. He coaches because of his previous experience with club hockey.

“When I was in college my first year, I didn’t make the team,” Arnesen said. “The next year, I went back and played for the club team and we had a blast. That was the most fun I ever had playing hockey.

“What I got from that, I wanted to give back to that. I love the sport. I coach, I ref, my kids grew up in it. I just like giving back to the kids.”

Cormier has coached for nearly 20 years, and, despite having two kids who play hockey, likes coaching the college-aged kids at the club level better than the younger kids in peewee hockey.

“I like having the one-on-one interactions, and not just giving hockey lessons, but also some life lessons,” Cormier said. “A lot of things that happen in life, like work ethic, can be taught through hockey.”

Elon now plays in the Atlantic Coast Collegiate Hockey League (ACCHL), part of Division II of the American Collegiate Hockey Association (ACHA). The 13-team league is broken up into three divisions, with Elon residing in the 5-team Central Division.

As Elon’s competed in the ACCHL, the captain of the team, senior defenseman Nick Garfield, has seen steady improvement from when he and his best friend Cameron Bloomer ’15 first played.

“It’s so much better now,” Garfield said. “When I started, we had a 20-man roster, and sometimes not everyone could come, so we had games with three defensemen. Now we have eight, and we pick six. We have 40 men — well, actually, 38 men and 2 women.”

The long, late road to the rink

The hockey team is one of the few teams, club or varsity, that doesn’t have a usable facility on campus. And ice rinks aren’t as plentiful in North Carolina as they are in the Northeast, where the majority of Elon hockey players come from.

The team rents vans from the university to get to practice, packing the players in as tight as necessary to avoid running up expenses. Garfield typically drives one of the vans both ways.

“Sometimes it can be tough, especially when you’re up that late,” Cormier admits. “But once you’re on the ice, and things are flowing, and the kids are enjoying themselves, then it makes it all worth it.”

Garfield embraces the late practices, and seems to love the insanity of the schedule.

“It’s not an issue,” Garfield said. “I had 8 a.m. classes on Thursdays. You wake up. Sleep has never been an issue. Get what you can, and take a nap the next day if you need it. I’ve missed two practices my entire career, maybe three.

Weekends usually mean a game or two for the team, and the Jan. 15-16 weekend is no different. The first games back from winter break happen in a 16-hour span, with a 10:15 p.m. game against North Carolina State University’s club team Friday Jan. 15 followed by a 3:45 p.m. game Saturday Jan. 16 against UNC.

Friday night’s game was a tightly contested 3-1 loss for Elon, with both of the goals for the Wolfpack coming in the last six minutes of the game. Elon was proud of its performance Friday night, as the Wolfpack are undefeated in ACCHL play and 17-2 overall, best in the league. UNC also played Friday night, with an 8-4 win over Wake Forest University in a 9:15 p.m. game.

But the Tar Heels had Elon on their mind, as the Phoenix beat them 7-3 Nov. 22, the last game before break for UNC. The Tar Heels were missing their two best scorers, junior forwards Brendan Radatovich and AJ Hamel, who also serves as the team captain.

“We’ve played them before, and we won last time,” Garfield said. “Neither of us had full rosters, and when we played last year, we stopped the game because the ice was all messed up — concrete was coming through the corner.”

But a 3:45 p.m. start doesn’t mean the puck drops at that time. The Sportsplex holds open skating until 3:30 p.m., and then the Zamboni comes out to resurface the ice before the game.

Right at 3:45 p.m., the whistle blew for the teams to hit the ice for the seven minutes of warm-ups. After the quick skate, both teams skated to their respective bench, save for the starters for each team.

The national anthem played over the stereo at 3:52 p.m., the only time the rink will be silent. With the anthem over, the puck dropped at 3:55 p.m.

When the puck finally dropped, Elon got a shot on goal eight seconds into the game, but UNC’s goalies saved the initial breakaway.

After that, it was all Tar Heels in the first period, with captain Hamel leading the way with two goals and an assist. The fourth goal of the period for UNC came with 18 seconds left, with Hamel getting a pass from Radatovich after an Elon player slipped in the Elon defensive zone.

As the player who slipped returned to the bench he slammed the door shut behind him, and threw his stick against the boards out of frustration. Since the game was played in Winter Term, multiple Elon players were studying abroad for three weeks, and the results of the depleted roster showed early.

Elon got on the scoreboard in the second period with two goals, but gave up five more. Despite two quick goals in the third period, Elon lost to the Tar Heels, 12-4.

“Not the result we wanted,” Garfield said. “It was a scheduling error. We played State last night, so we’re all exhausted.”

The desire to play

Like so many players in the ACCHL, Waetjen and Garfield both decided to not pursue hockey as a career, knowing their skill level would have made them marginal-at-best prospects.

“I probably could have played D-III if I wanted to, but that would have meant dedicating my life to it,” Garfield said. “I wouldn’t have had any fun. Here, we have a whole social life, we have a blast, and as a plus, we get to play competitive hockey.

“We have really good players, who played juniors, that chose education and a lifestyle and fun over the dream. I was never up for the dream.”

Garfield wears the captain’s ‘C’ on his jersey proudly, and bears the weight and responsibility that it carries with pleasure.

“Just the other day, the refs came through and said, ‘You’re one of the guys we look towards on the ice, and we’re always excited to play with Elon because of you,’” Garfield said. “I keep my guys calm the whole time, despite all the nonsense that happens. I can’t control when guys jump off the bench. But other than that, I keep everyone calm.

“Coach Cormier always says hockey is an emotional roller coaster. There’s ups and there’s downs. If you don’t stay at your peak, where you want to be, it’s not going to end well. You’re either too intense or down on yourself. My goal is to keep everyone staying positive.”

Garfield knew about the challenges a hockey player faces at Elon from when he visited campus his sophomore year of high school with his best friend from home, but his love for the school shone through.

“I love Elon,” Garfield said. “It was just a matter of getting in. I applied to two schools, and if I didn’t get in to Elon, I was going to Coastal Carolina [University] for as long as it took to get in here. I love this school.”

The common theme across all of the players is the love of hockey, something that they’ve known since they could first remember.

“I just really didn’t want to give it up yet,” Waetjen said. “As soon as you’re in deep, playing hockey your whole life, it’s really hard to let go of something like that.”

“I couldn’t imagine not playing,” Garfield said. “Seeing all the guys still playing and me not playing when it’s such an option to play. You know?”

As his final season with Elon club hockey comes to an end this month, one can assume Garfield won’t have a problem finding a new team to play hockey with.