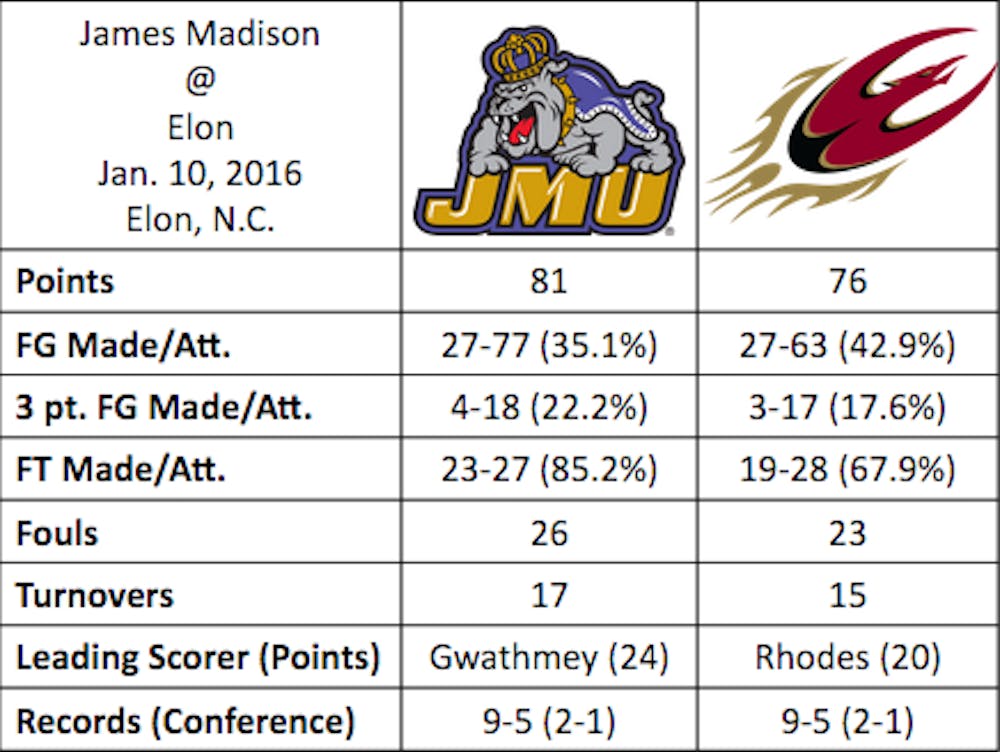 The Elon University women’s basketball team nearly beat James Madison University on Sunday afternoon despite a lack of rebounding, but ultimately the Phoenix fell 81-76 in overtime at Alumni Gym in the Colonial Athletic Association affair.

“We have to control the things that we can control defensively and, of course, boxing out. Any time you give a team 30 offensive rebounds, it is hard to escape with a win,” said Elon head coach Charlotte Smith.

The Phoenix spent most of the game trailing until late in the fourth quarter. Junior guard Lauren Brown hit two free throws to give Elon its first lead since the 6:56 mark in the first quarter. Brown finished the game with 11 points (2-10, 1-7 from three, 6-6 from the free throw line).

Elon had extended its lead to as much as three with seven seconds left, but Brown inexplicably fouled JMU senior guard Jazmon Gwathmey on a three-point attempt, a play that Smith wished her team could have back.

“As an offensive player you know any time anyone leaves their feet that you are going to shot fake and jump into them,” said Smith. “I felt like on the close-out we probably should have closed-out just a little shy of it and contested it from a distance.”

Gwathmey ended her afternoon with a game-high 24 points (7-20, 0-3 from three) and did much of her damage from the free throw stripe (10-12), including the three free throws that sent the game into overtime. In an attempt to redeem herself from the costly foul at the end of the fourth quarter, Brown hit a jumper with 1:10 left in overtime to give Elon a 76-75 lead, but Gwathmey scored the next four points and put the game away for the Dukes.

The Phoenix got off to a slow start, trailing 17-9 at the end of the first quarter but clawed its way back to a five-point deficit as the teams headed to the locker room at halftime.

While the Phoenix seemed to look like a different team in the second half, Smith did not significantly modify the game plan in the locker room at the midway point.

“We emphasized getting the ball inside — we didn’t talk about a whole lot of adjustments other than boxing out,” Smith said. “It felt like a lot of things we were doing in the first half was working and we just weren’t hitting shots in the first half.”

The rebounds were few and far between for the Phoenix, as James Madison dominated the rebounding battle 57-33, including 30 offensive rebounds for the Dukes. While the team failed to crash the boards effectively, Rhodes says there were some bright moments in the game.

“I mean, other than that one area of boxing out, I think we competed fairly well,” said Rhodes. “I think there were bits of pieces where we had energy and had something on the defensive end that I was proud of.”

James Madison now owns a 4-0 record against the Phoenix all-time, including a victory in the CAA conference semifinals last year in Upper Marlboro, Maryland.

The Phoenix drops to 9-5 with the loss and 2-1 in the CAA. Elon will look to rebound from the loss when the team travels to Towson University for a 7 p.m. game this Friday, Jan. 15.