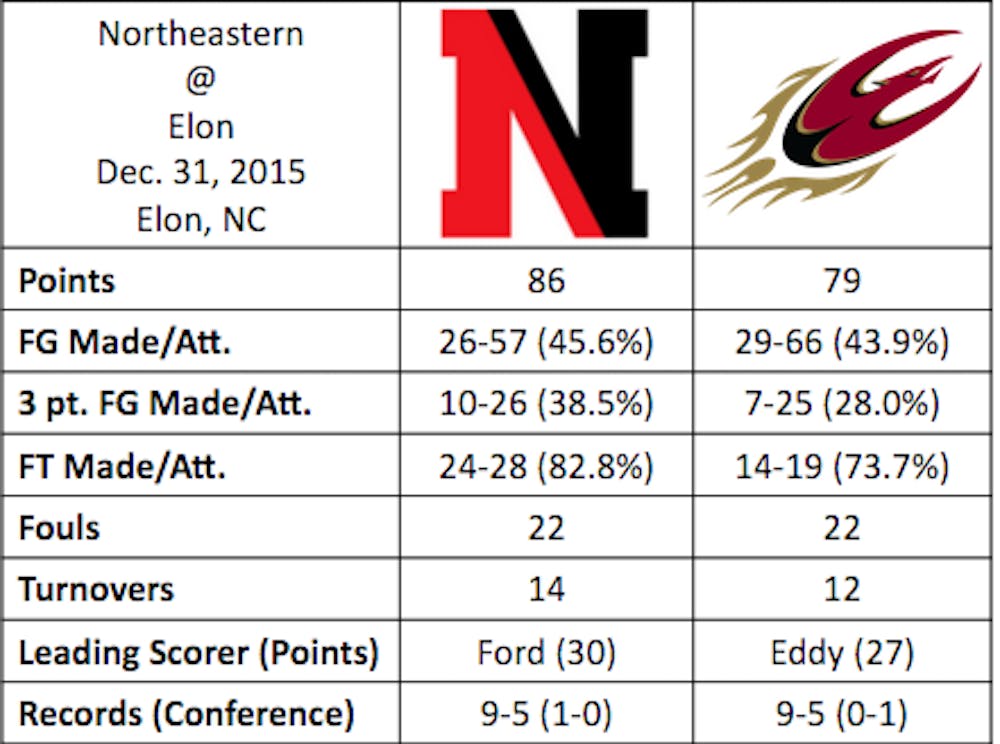 “This was a game very much like we expected against a very good Northeastern team, and we knew it was gonna be a tough, physical game,” said Elon head coach Matt Matheny. “That’s the way the CAA is.”

The game, which was a one-point game at halftime and remained that after five minutes of the second half, really was decided when Northeastern went on a 13-0 run over three minutes. The Phoenix allowed three straight Husky three-pointers, with two coming from redshirt senior forward Quincy Ford.

“The bottom line is, in order to win this game, we need to either really shoot the ball well, which we did not do, or you have to be really good defensively,” Matheny said. “We’re getting a little bit better, but we’re still allowing people to get open shots — whether that’s a drive to the basket and it’s an [uncontested] layup or we go under a screen when we should go over a screen and they get an open three.”

Ford, who had a scout on-hand watching him from the NBA’s San Antonio Spurs, set a new career-high with 30 points (10-19 shooting, 5-9 from three, 5-5 from the free throw line). He also tied a career-high with six assists and added eight rebounds.

For Elon, junior guard Luke Eddy tied his career-high with 27 points (9-15 shooting, 2-4 from three, 7-10 from the free throw line), which he previously had done at the University of Missouri in 2014. He also led Elon with five assists.

“I was just attacking — that’s my job, to attack,” Eddy said. “I guess the lane was a little more open tonight.”

“[Williams] is a guard who gives us some really good, tough, on-the-ball defense,” Coen said. “He would’ve been our best matchup against [Eddy].”

Matheny said he and the coaching staff will watch film to try to determine what will work best for Elon’s defense, which has kept its opponents under 70 points twice in 14 games this season.

“We got to figure out a way to take them out of rhythm,” Matheny said. “We only played one possession of zone today, and we either got to be better in man or break their rhythm with zone or with full court pressure.”

The Phoenix turns around quickly, a pace the CAA schedule sets for the team frequently throughout the season, with another contest at 4 p.m. Saturday afternoon against Drexel University.