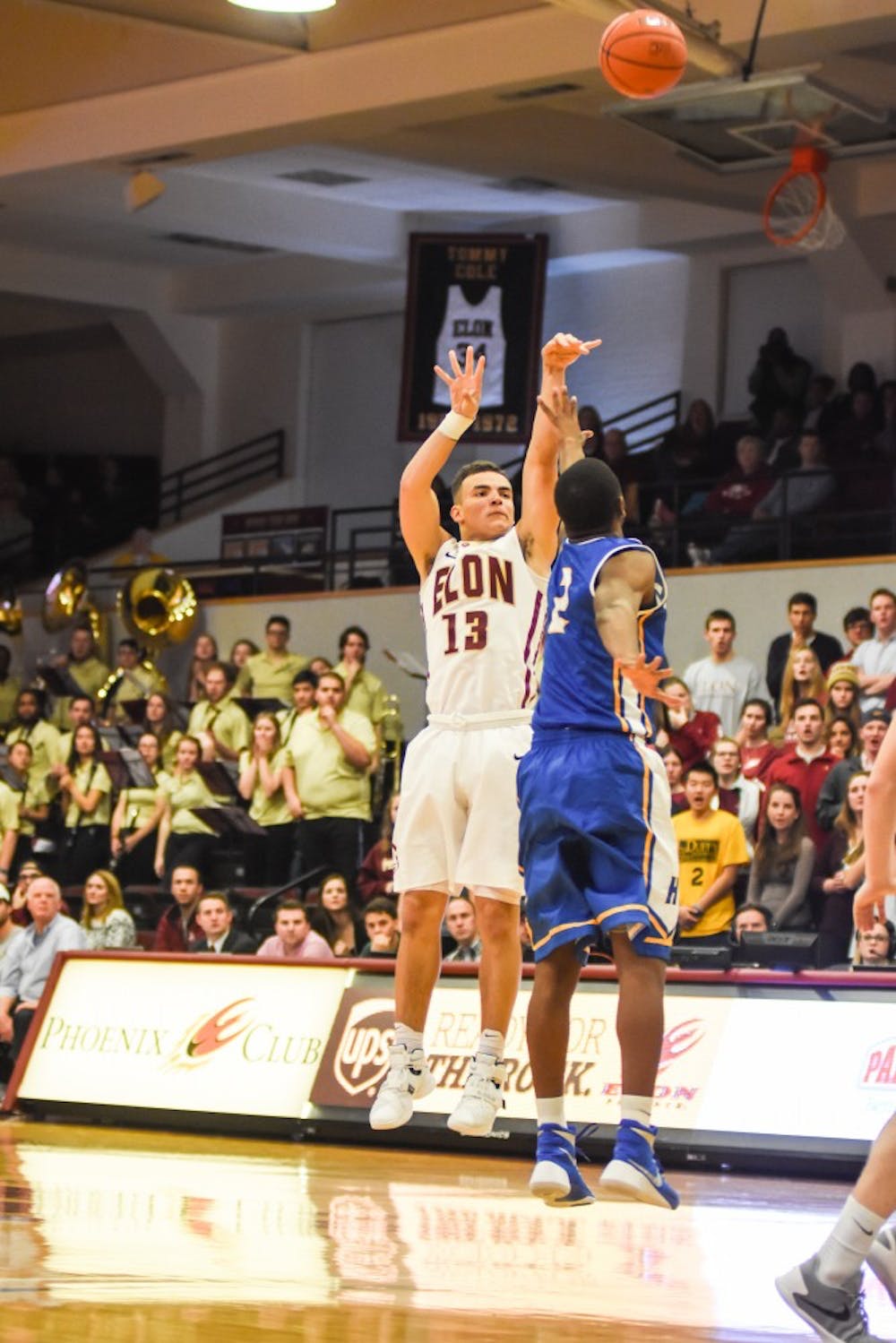 When freshman guard Steven Santa Ana’s corner 3-pointer rimmed out with 30 seconds left in regulation, the air got sucked out of Alumni Gym, as well as the Elon University men’s basketball team’s chance of victory over Hofstra University. The Pride hit its free throws at the other end to close out an 80-76 victory at Elon in Colonial Athletic Association (CAA) play.

Head coach Matt Matheny  said he was happy to see Santa Ana with the confidence to take a shot in the big moment on the back of what Matheny thought was Santa Ana’s best performance in his early college career (this past Thursday at James Madison University).

“What a great feeling to know somebody like that’s getting you a good look,” he said.

Senior guard Juan’ya Green led the way for Hofstra, narrowly missing out on a triple-double with 18 points, seven assists and eight rebounds.

"We just jump on his back and ride him, he’s a thoroughbred,” said Hofstra head coach John Mihalich.  “It’s not just his scoring, he gets the ball to the right people, or gets fouled. His decision making is really, really good.”

Sophomore center Rokas Gustys chipped in with a double-double on 19 points and 12 rebounds — both team highs.

Senior guard Tanner Samson led all scorers with 23 points on 7-of-9 shooting from behind the arc. Samson’s last 3-pointer tied the game at 73-73 with 2:41 remaining. He said the team was confident yet calm down the stretch, but came up short in key areas to cost the team a shot at victory.

Junior guard/forward Christian Hairston collected a double-double of his own on 19 points and 13 rebounds.

With Hofstra using a variety of defensive schemes to run Elon’s shooters off the 3-point line, the Greensboro native was left lots of room to create and distribute from the paint.

Hairston acted as the focal point of the Elon offense in the first half, taking 13 of his 15 shots in the opening period. Back to back layups from Hairston knotted the game at 17-17 with 13:28 remaining.

“We were able to get the ball inside,” Hairston said. “In the first half my shot was there.”

Hofstra responded with a 13 straight points of its own before Elon could blink in a span of one minute and 56 seconds. The run was capped off with three-pointers on three straight possessions. Senior guard Juan’ya Green hit a three followed by a pair from junior guard Brian Bernardi to extend Hofstra’s lead to 30-17.

The Phoenix would pull to within a pair, but Hofstra always seemed to have an answer and went into the halftime break with a 43-35 lead.

The Phoenix wraps up a brief home stand at 7 pm. Thursday, Jan. 14 against in-state rivals the University of North Carolina at Wilmington.