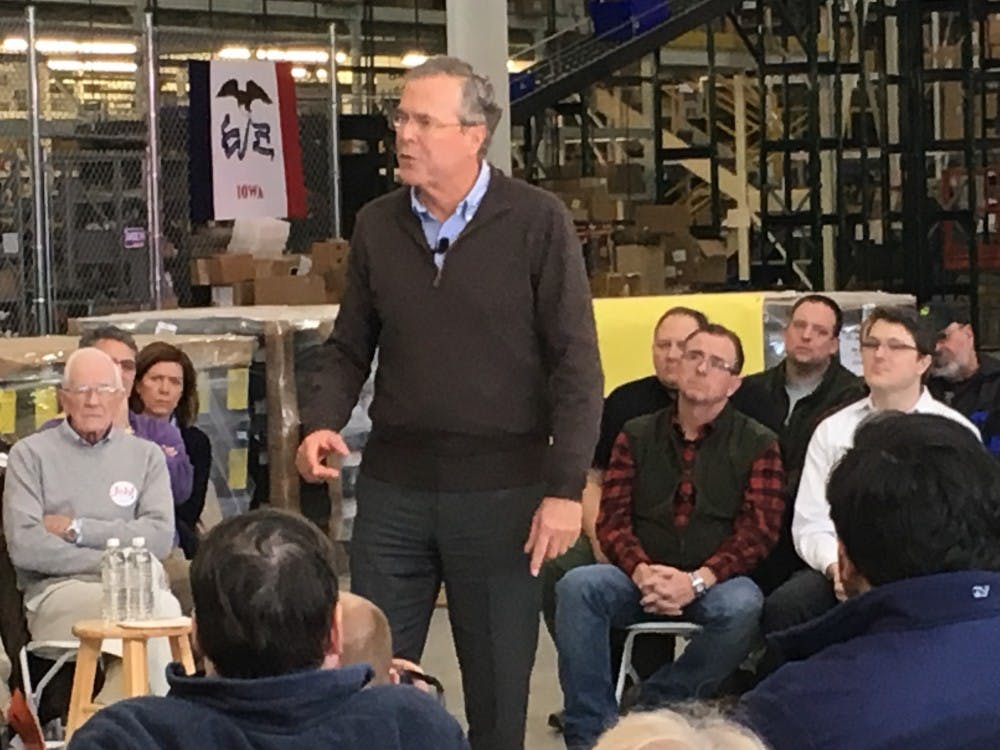 A firearms manufacturing warehouse is an uncommon location to host an event. But Republican presidential candidate Jeb Bush, highlighted his Texas roots by choosing a potentially controversial location, in light of the gun rights discussions across the nation.

The expansive warehouse housed three stories of gun manufacturing gear that expanded past eyesight. But the American flag and Jeb! signs saying "Trusted Leadership for a Stronger America" and "Iowa for Jeb! 2016" with country music playing on the speakers, had the audience interested in seeing a Republican presidential candidate.TWhile the majority Caucasian audience looked primarily in the 40s and older, there were a handful of young adults who looked to be in their 20s. The space had every seat filled, with Jeb! volunteers getting extra seating, yet there still was not enough.

But the seats were quickly forgotten when Jeb Bush walked out with Pete Brownell CEO of Brownell's Firearms Manufacturing who then introduced the Republican presidential candidate.

"The second amendment and the rights of gun owners are under attack," Brownell said.

Brownell introduced Bush to a fairly crowded room of supporters, where he quickly took the stage and spoke with fervor.

He discussed how a president should be running into a burning fire and saving people, not running away from the issue of a building on fire.

"I will not be an Agitator-in-Chief, a Divider-in-Chief. I will respect the military. And I will be a Commander-in-Chief," Bush said.

He claimed that he reduced gun violence dramatically in Florida by passing laws called ten, twenty, and life.

The military and gun rights weren't the only issues Jeb Bush talked about, he also discussed issues pertaining to college students.

"First of all, we need to reform the student loan program and reform higher education so that you can get out of college with a four-year degree in four years, rather than six years," Bush said.

Additionally, he wants to focus on lowering the cost of college and reform the student loan process so students do not have major debt. Then he wants to grow the economy.

"If the first rung of the ladder can't be met because someone's got their feet on that because they're not moving up, which is what we have now, we have an economy that's effectively stuck in place, you're not gonna kind of get the dynamic turning of the workforce where young people have greater access," Bush said.

He plans to unveil his student loan reform next week.