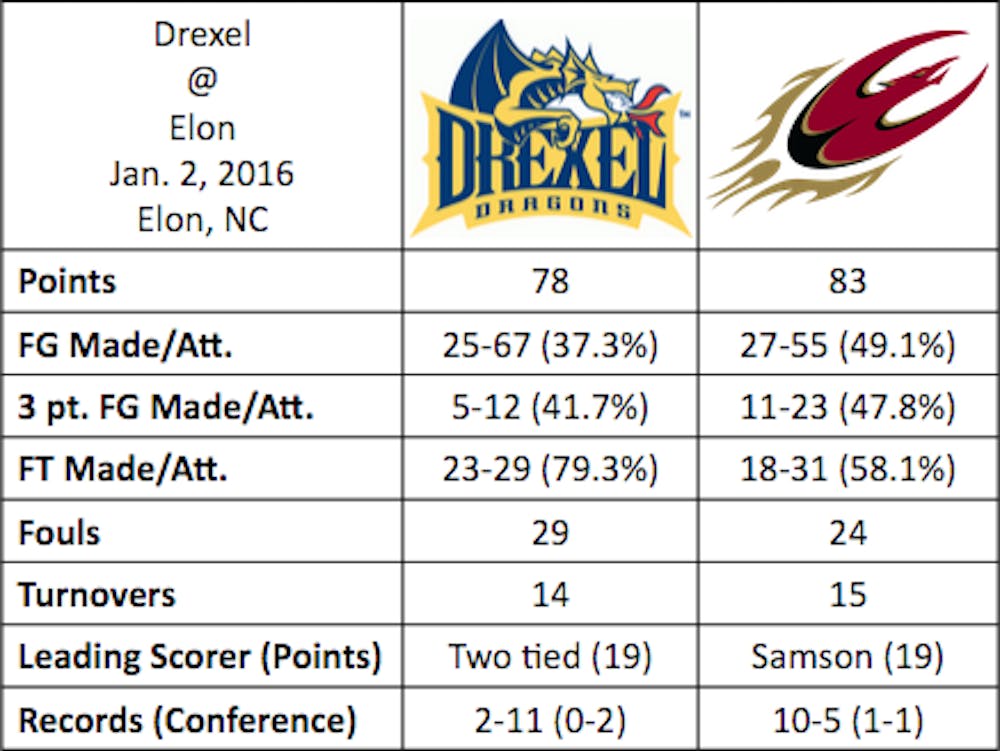 “There are a lot of things to love about [Santa Ana],” said head coach Matt Matheny. “One of them is his confidence, one is his ability to score. One is his coachability, because he’s getting better defensively. But I think that, basketball-wise, I love the most about him is how hard he works.”

Santa Ana made three straight 3-pointers to start his afternoon and added a fourth in the second half, displaying a shooting stroke that had sophomore guard Dmitri Thompson in awe.

Drexel only made eight shots in the first half, shooting 25-percent from the field. The 28 points Elon allowed to the Dragons is the second-lowest first half point total for an Elon opponent this season, only trailing the 25 points allowed to the University of North Carolina at Charlotte Nov. 13.

“Defensively we were maybe the best we’ve been this season in the first half, and I thought we were good offensively,” Matheny said. “In the second half, it was a really tough and physical conference game — it’s a battle every night. I thought we competed tonight and we’re happy about the victory, but we have a lot to work on too.”

Thompson shined on the defensive end, collecting seven rebounds (six defensive rebounds) and helping hold the Drexel guards to a combined 16-53. Thompson also added 11 points in 24 minutes of play. After a few games of disappointing play, Thompson countered a question about if this game felt different.

“It didn’t feel different, it felt right,” Thompson said. “I know what I can go out there and do. I just have to lock in defensively, and then things will start coming my way. I felt like I played pretty good defense today, and that’s my way of playing well.”

Senior guard Tanner Samson led the Phoenix with 19 points, albeit on 5-15 shooting and an unusually poor 2-9 from deep. Stellar free throw shooting (7-8) helped him reach his point total, but Santa Ana was quick to defend his teammate and Elon’s leading scorer.

The Dragons (2-11) were led by junior forward Rodney Williams, who scored a career-high 19 points and grabbed seven rebounds, and senior guard Tavon Allen, who also added 19 points. Drexel head coach James “Bruiser” Flint, who was seen on the court at multiple points in the game, didn’t mince words about his team’s performance this season.

The Phoenix improves to 10-5, and 1-1 in the CAA. Elon leaves the state of North Carolina for the first time in more than a month when it plays at 7 p.m. Thursday at James Madison University.