Elon dominated the boards, and Tyler Seibring had the go-ahead jumper in a 71-67 CAA win. 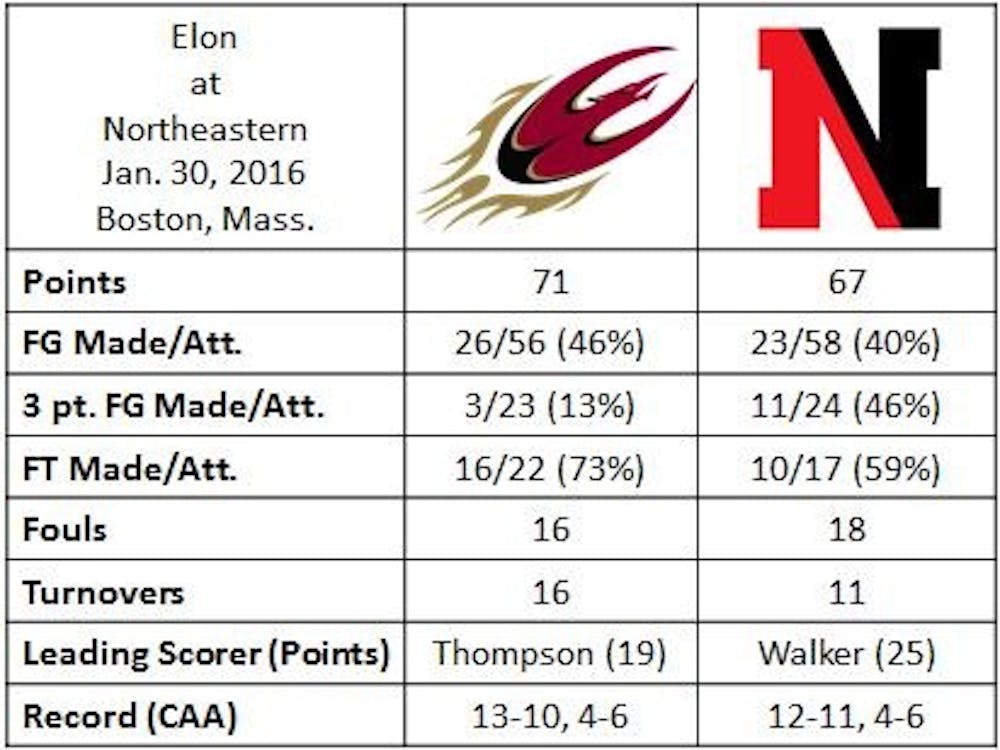 Sophomore guard Dmitri Thompson had 19 points and freshman forward Tyler Seibring hit a go-ahead jumper in the lane with a little more than a minute left as the Elon University men's basketball team edged Northeastern University 71-67 on Saturday, Jan. 30 in Boston.

The Phoenix (13-10 overall, 4-6 Colonial Athletic Association) trailed by as much as 15 and 14 in the second half, but minimized second-half turnovers and dominated the boards in its comeback efforts.

Elon outrebounded Northeastern 44-29, its best rebounding margin against a Division I opponent since Jan. 27, 2011.

And this victory came despite the Phoenix shooting 13 percent (3 of 23) from 3-point range.

Elon committed 11 first-half turnovers, but was charged with just five in the second half. The Huskies (12-11, 4-6) scored 20 points off those turnovers, and led 40-29 at halftime.

Northeastern senior guard David Walker had 19 points in the first half alone, but Elon did a better job defensively on him in the second half, limiting him to six points on 2-of-13 shooting.

The Huskies took an eight-point lead with a little more than eight minutes left, then went until the final seconds before making another field goal. Baskets by Samson, Seibring and sophomore forward Brian Dawkins, along with a Thompson dunk, cut the deficit to two with less than four minutes to go.

Seibring's layup with 2:35 left brought Elon within one, and his turnaround jumper in the lane with 1:14 remaining was the difference. The Phoenix sank five of six free throws down the stretch to hold on.

Walker led the Huskies with 25 points, while junior guard T.J. Williams had 12.