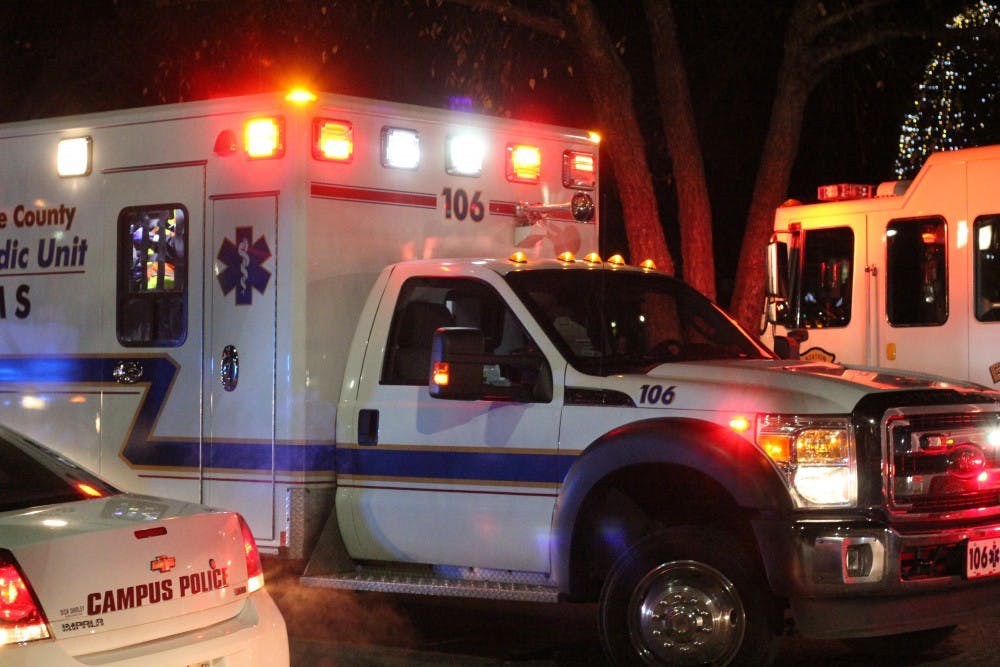 Two Elon University students were taken to Cone Memorial Hospital in Greensboro after being hit by a car around 8 p.m. Sunday in the crosswalk between Belk Library and the Powell Building. Photo credit: Hali Tauxe

Two female Elon University students were hit by a car driven by another Elon student around 8 p.m. Sunday on Haggard Avenue crosswalk between Belk Library and the Powell Building, according to Town of Elon police officer Brian Phillips.

Freshman Katherine Custer was struck by the right side of the car, causing her to be thrown an estimated 6-10 feet, according to a Town of Elon police report. The other pedestrian, Madeline Morris, had her right foot run over by the car, according to the report.

Both of the students were taken to Cone Memorial Hospital in Greensboro with suspected non life-threatening injuries.

Two charges for failure to yield at a crosswalk are pending at this time for the driver.

One of the students was first treated on the lawn near the Powell Building. She was then moved into the EMS Alamance County Paramedic Unit ambulance for eight minutes.

"I was walking across the McMichael crosswalk and out of the corner of my eye I saw a car, so I looked away because I didn't see anything," Lancto said. "And then I heard a screech, a scream and a really loud thud. I looked back and the girl had flown like 10 feet up the street."

But Lancto noted the woman was conscious after impact.

"The woman in the street sat up," he said.