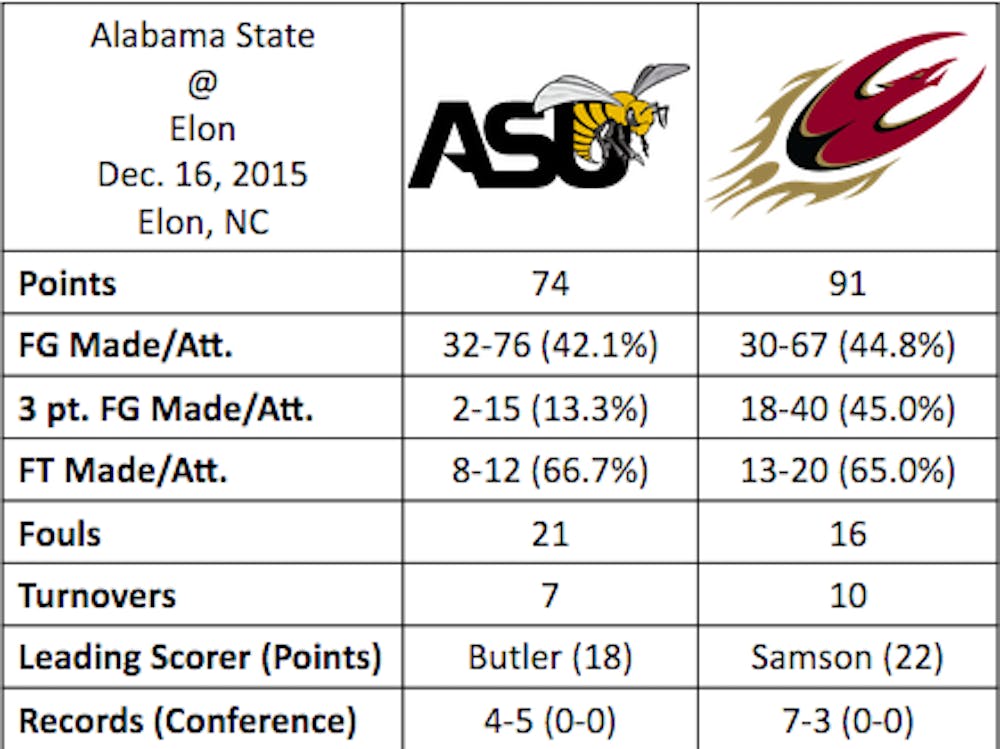 The Elon University men’s basketball team stormed out of the gates against Alabama State University Wednesday, scoring the first 14 points of the game en route to a 91-74 victory. The win is the fourth straight for Elon and fifth in the last six games,

Senior guard Tanner Samson hit four straight 3-pointers to start the game, building the lead out to 12-0 in just 130 seconds. Junior guard Luke Eddy added a layup to make it 14-0 before the Hornets scored their first points of the game.

Elon got the lead up to 22 points in the first seven minutes, leading 26-4 after junior guard/forward Christian Hairston’s three-point play with 13:10 left in the half.

The Hornets cut the deficit to 15 at halftime, but Elon jumped on them again at the start of the second half. Samson and Eddy each hit 3-pointers and Hairston followed with a layup for an 8-0 run to start the half. The 53-30 lead tied for the largest lead Elon had on the night, at 23 points.

Samson led all scored with 22 points on the night, taking only 3-pointers and making 6-of-9. It continues a trend for Samson, who has taken 86 of his 99 shots on the year from behind the arc. He also added 4-of-6 free throws.

Eddy had his best performance of the season, with season-highs in points (18) and assists (nine) on 6-of-13 shooting. Hairston added 15 points and freshman forward Tyler Seibring contributed 12 points on four 3-pointers. Both Hairston and Seibring also added six rebounds.

The Hornets, who earlier this season defeated Virginia Tech of the Atlantic Coast Conference, fall to 4-5.

The Phoenix hopes to continue its winning ways at 1 p.m. Sunday when it hosts the University of North Carolina at Greensboro. The local matchup of former Southern Conference rivals is the first of a basketball doubleheader Sunday, with the Elon women hosting High Point University immediately following the men’s game.