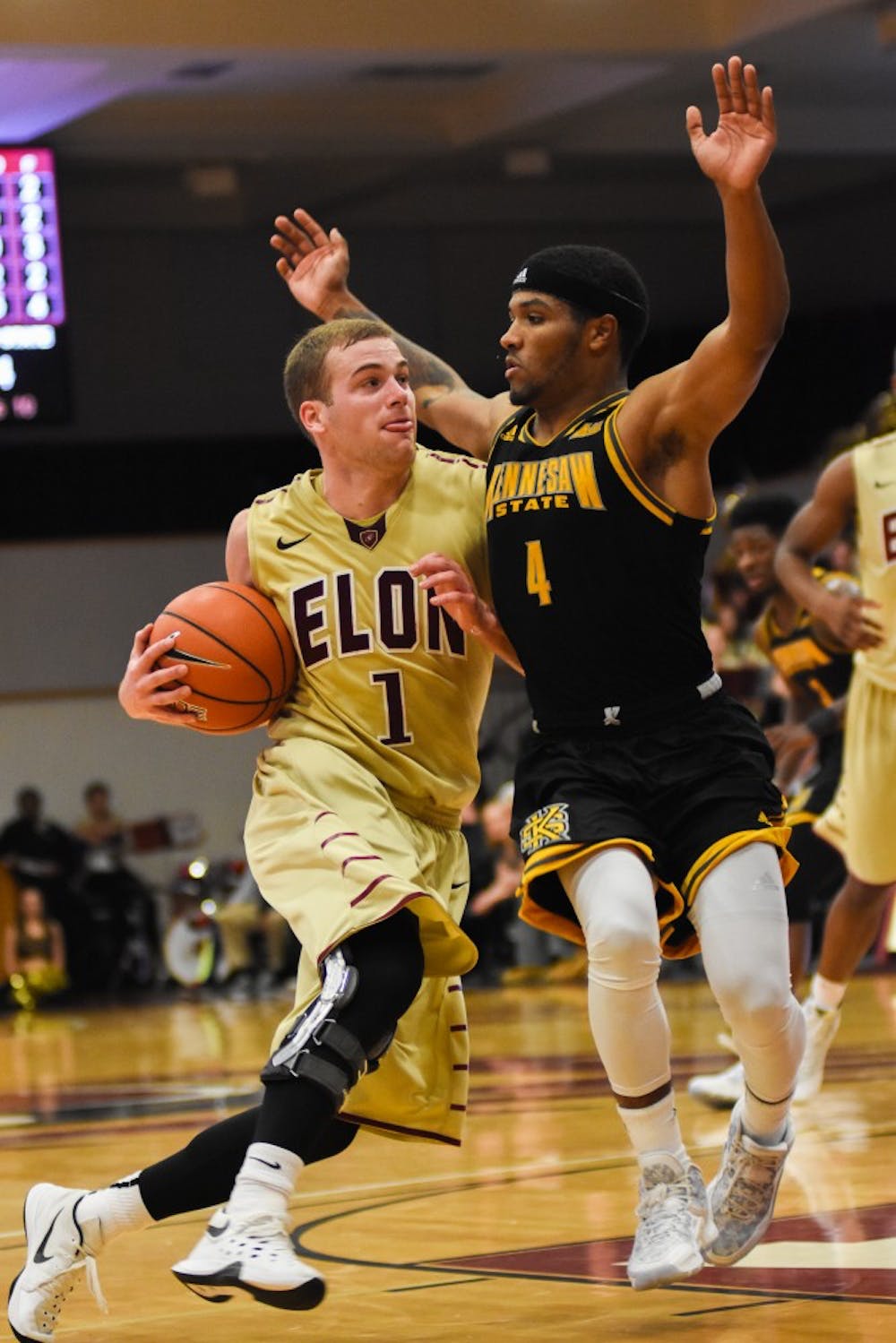 Elon University men’s basketball head coach Matt Matheny said he can’t wait to watch the film to figure out how his team surged to a 103-93 overtime victory over Kennesaw State University Nov. 30.

“We’re thrilled to walk out after tonight with a victory,” Matheny said. “It’s great to be able to smile after a game like that.”

The Phoenix overcame an eight-point deficit in the final 14 seconds to send the game to overtime tied at 89, leaving Matheny and the rest of Alumni Gym crowd wondering how it all went down.

“We’ve been working on our late game situations a lot lately in practice, and we believe in them,” said senior guard Tanner Samson.

Junior guard Luke Eddy sparked the run by going down the length of the floor before finishing it off with a layup to make it 89-83. Freshman guard Dainan Swoope then cut Elon’s deficit to three with a 3-pointer after Kennesaw State senior forward Nigel Pruitt missed a pair of free throws at the other end.

Kennesaw State was forced to call a timeout after failing to inbound the ball after Swoope’s bucket. In the huddle, Matheny told his players to not make it easy for Kennesaw to catch the inbound pass.

Samson deflected the ensuing inbounds pass, which Eddy corralled before being fouled in the act of shooting what would have been the game-tying three.

“We want them to have to throw the ball over the defense,” Matheny said.

Without somebody defending the inbounded, Matheny said Samson was able to be the “thief” to steal the ball off the inbound pass.

Eddy hit all three free throws to tie the game at 89 apiece and force overtime.

“In the beginning of the season I was missing [free throws], but now I’m finally starting to get my groove,” Eddy said. “When I was [shooting] my foul shots, all I was thinking about was to just get it over the rim, but I was confident. I knew I could do it.”

Matheny said the team showed a lot of emotion, which helped carry Elon to a dominating overtime period.

“We came back and tied it up, so our guys were charged up going into overtime,” he said.

Samson scored a team-high 31 points on 9-16 shooting including eight from behind the arc. Samson finished with his second career double-double, grabbing a career-high 11 boards.

Junior forward Christian Hairston chipped in with a double-double of his own with 21 points and 13 rebounds in 28 minutes off the bench. Matheny said it was the best game Hairston had played in an Elon uniform and he’s still getting better.

The 103 points marks the first time the Phoenix scored triple-digits points against a Division I opponent since Feb. 28, 2004, against the University of North Carolina at Greensboro. Elon needed three overtimes to break the 100-point mark that night, defeating UNCG 112-108.

With the win, Elon improves to 4-3 on the season. The loss drops Kennesaw State to 1-7. The Phoenix hit the road for a matchup at 7 p.m. Dec. 4 at Florida International University in Miami.