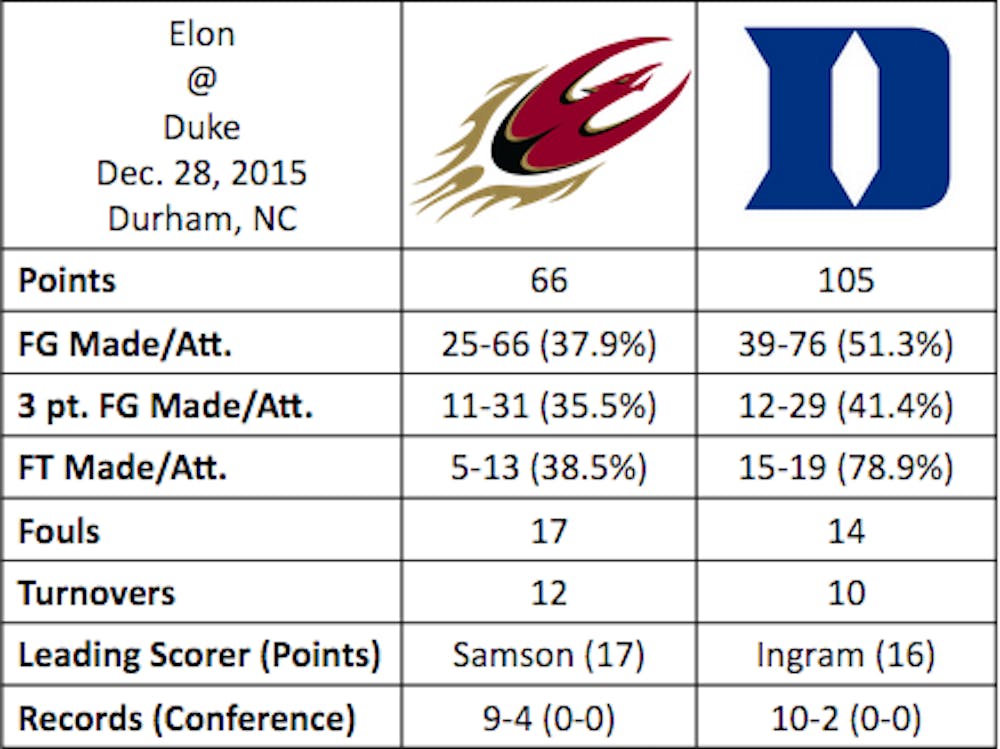 DURHAM — At the first media timeout, the Elon University men’s basketball team was encouraged with its play, staying within a point of Duke University.

“We started well, and it was a one-point game because we did some of the little things well,” said head coach Matt Matheny. “Whether it was being in good position defensively and getting the loose ball rebound... we could have taken the lead a couple times in the first four or five minutes.”

But then the rest of the first half happened, with Duke hanging 70 points on the Phoenix en route to a 105-66 victory Monday at Cameron Indoor Stadium. The 70-point half for Duke is the third such half in school history, as the Blue Devils scored 72 twice previously, in 1965 and 1989.

“That was ... not our best performance,” said junior forward Christian Hairston. “We did not play 40 minutes of Elon basketball.”

Hairston, who finished the night with nine points and six rebounds but refused to look at the stat sheet after the game, was pleased with Elon’s play in the through five minutes, as the Phoenix trailed Duke 13-12. Senior guard Tanner Samson agreed with his teammate.

“I like how we started the game in the first couple of minutes,” Samson said. “We competed really well, did the things we talked about pregame and stayed composed. We started out of ourselves, and that’s when they went on their run.”

Over the next 10:20, the Blue Devils went on a 46-9 run, pushing the lead into the stratosphere at 38 points. Duke's lead reached 40 with less than three minutes left.

The Phoenix did play the Blue Devils to a tie (35-35) in the second half, but Matheny didn't seem to feel that was due to an heightened level of play from his team.

“We played better, [but] I do not think Duke had the same fire because they did not attack us as much,” Matheny said. “I am going to go back and watch the film, but I think we played just a little bit better in the second half.”

Samson led the Phoenix on the night with 17 points, shooting 6-of-9 overall and 5-of-8 from 3-point territory.

Hairston drew the assignment of guarding Duke freshman guard/forward Brandon Ingram, who is listed at 6 feet, 9 inches and 190 pounds. Ingram led the Blue Devils with 26 points and 11 rebounds, one of two Duke players with a double-double on the night — senior center Marshall Plumlee had 10 points and 11 rebounds.

“[Ingram]’s a very versatile player,” Hairston said. “He’s very skilled. I think the closest thing we may see to him is [senior forward] Quincy Ford of Northeastern [University].”

Nonconference play ends in Durham for the Phoenix, which posts a record of 9-4. Three of the four losses came at the hands of Power Five conference schools (University of Michigan, Syracuse University and Duke).