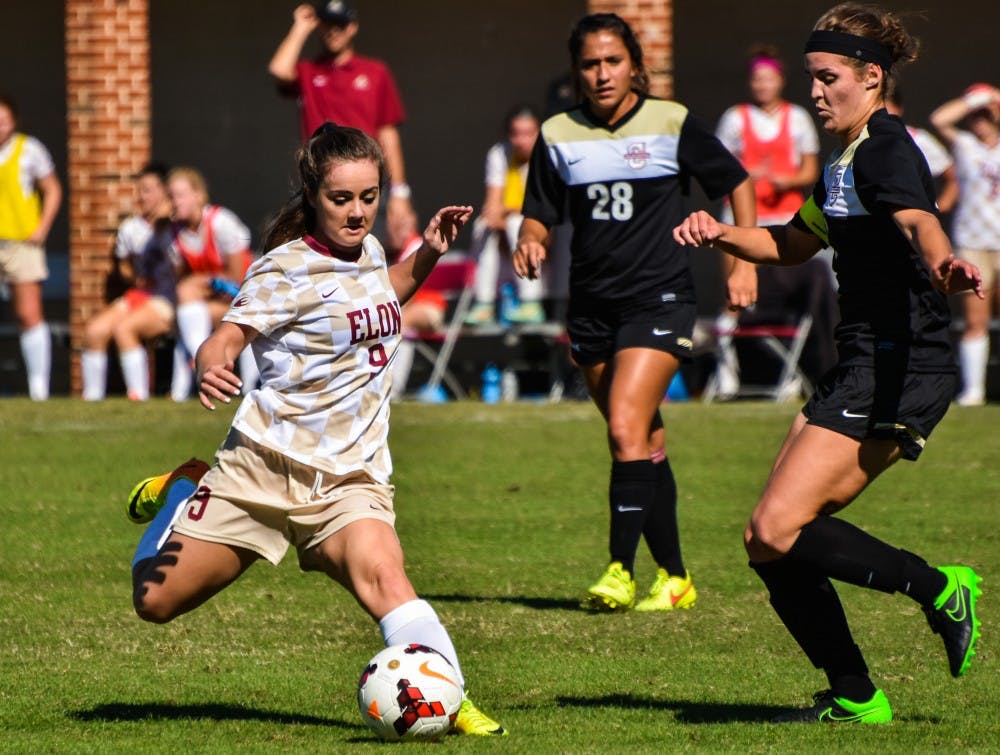 As far as women’s soccer goes, the Colonial Athletic Association (CAA) is one of the best conferences in the NCAA. At the conclusion of the regular season, six of the 10 conference teams were ranked in the top 70 of the NCAA’s Rating Percentage Index (RPI).

The Elon University women’s soccer team was not one of those six teams, finishing 10th in the conference. And yet, head coach Chris Neal sees a lot of good that came out of the season.

“Everything worked out as I expected from an improvement standpoint, but the only thing that didn’t cooperate were the in-conference results,” Neal said. “We were athletically more dynamic up top and at the back we had a little bit more experience this year and understanding.”

A closer look at the numbers tells the story of the team’s season, and the team pointed to a few key statistics that make it hard to ignore the improvement. The most telling statistic is the team’s goal differential. In 2014, the team had a differential of -20, a number that drastically changed.

The Phoenix also had better success offensively, scoring nearly 1.4 goals per game, sixth in the CAA and nearly double its average last season.

“I think from top to bottom we were improved in all phases. Experience is a big deal at the highest levels,” Neal said. “You just look at a lot of the teams that are atop the league, the common denominator is a tremendous amount of experience, especially with their key players. That maturity physically and mentally is priceless, and I think in the offseason we’ll be able to take advantage of that.”

Neal looked to a few games during the season — namely against Drexel University, James Madison University and Towson University — as games where his club really improved.

“We were getting in and behind defenses in breakaway type situations and those were quality chances that we were not able to create at all last year,” Neal said. ”The quality of chances we were creating, while unfortunately not coming away with goals, were as good as anybody in the league created.”

In fact, the Phoenix scored nearly twice as many goals as they scored last year (26 to 14) and took more than 100 shots than they had the season before, demonstrating the quality chances Neal pointed to.

After any difficult season, the key for a team is to come into the preseason strong and confident — something the players thought the team did well from the beginning.

“A big expectation coming into the season was just to build off of our last year,” said senior defender and captain Mel Insley. “Last season, our first season in the CAA, was an eye opener for us, both as players and as a whole team collectively, so we wanted to prepare ourselves to the best of our ability for this season, physically and mentally.”

This being her last season, Insley was very proud when she reflected on all that her class had been through, including the transition from the Southern Conference to the CAA.

“We challenged all the classes below us to just be the best they can, to work as hard as they can on the field and off the field to put themselves in the best possible situation,” she said. “As long as we knew they were all putting in what they could and had heart with everything, that’s all we could ask from them, and I think that’s something that we’ll definitely leave behind.”

While the seniors leave their legacy behind, those with time left in their Elon careers can see the path left before them.

“I think we took massive strides in getting where we need to be for next year,” junior midfielder Alexis de Groot. “The CAA is a very physical conference, and we need to make sure that we’re up to the challenge and I really do believe that we’re going to continue improving next year.”

Although certain statistics tell a story, a team’s win-loss record will continue to be the statistic that they want to change the most — and while the team is aware of that, they are also aware of the improvements that happen from one season to the next.

“Although our results in the league were only marginally better than the previous year, the players are very conscious — they see how much hard work was involved in the offseason to start closing the gap athletically, and also closing the gap from a soccer standpoint,” Neal said.

“The most important thing is that the players do see how we competed on a much different level than we did the previous year, and that is going to be the main motivation in the offseason.”