McDonald expected to be major contributor this year 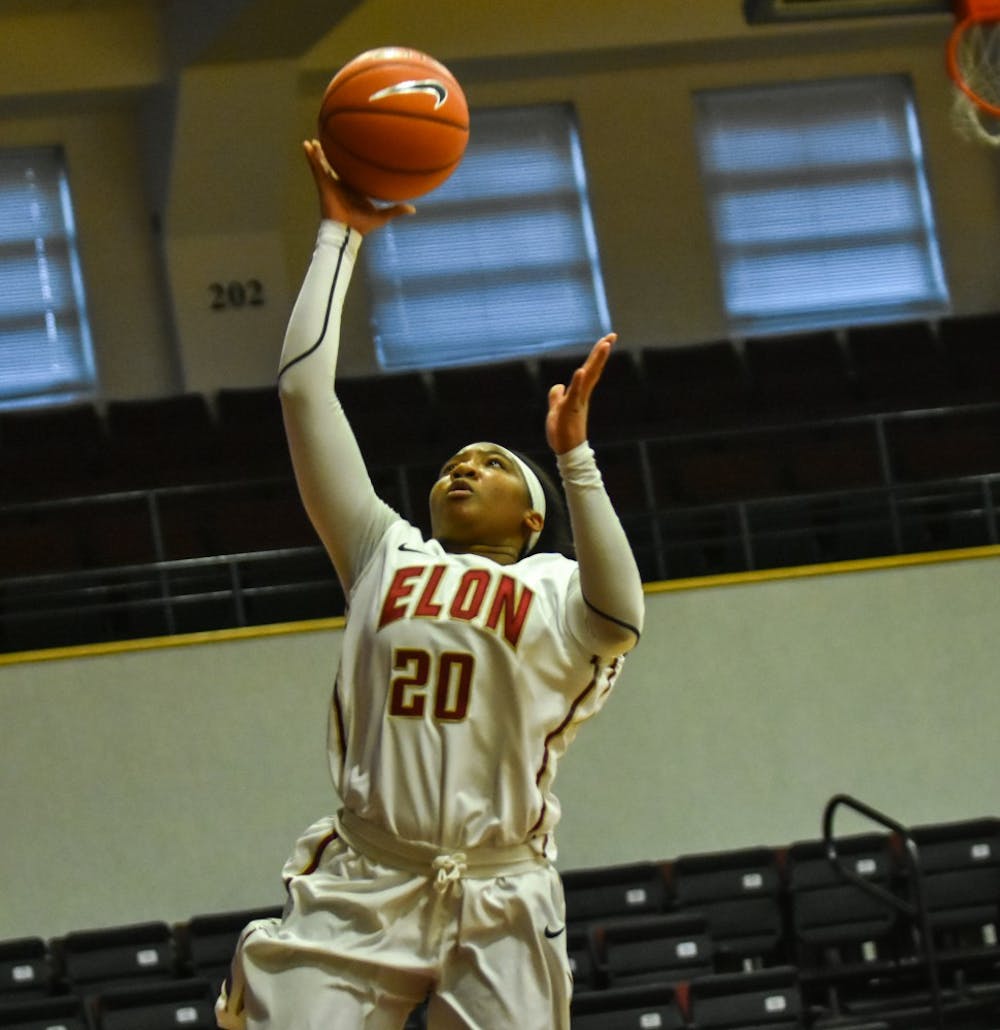 There’s only one freshman on the Elon University women’s basketball team this year, and according to senior guard Josepha Mbouma, the Phoenix has found a gem.

“If we’re only to have one freshman, we got the perfect one,” Mbouma said.

The “perfect one” is guard/forward Nikki McDonald, who comes to Elon from Atlanta. And she’s been making heads turn throughout the preseason practices.

“I’ve been really impressed with Nikki McDonald,” said head coach Charlotte Smith. “She’ll start for us at that 4 position. I’ve been extremely pleased with her coachability. She’s a great listener and is very teachable.”

McDonald’s play at forward will replace Sam Coffer, one of just three players from last year’s team who does not return this year. Coffer started in 117 games over her four years at Elon, leaving a hole McDonald is going to try to fill.

“I think she’ll be able to fill those big shoes that Sam wore,” Smith said. “Because Sam, she did so many things and was a stat-sheet stuffer. But she also did so many intangible things that didn’t show up on the stat-sheet. And Nikki plays with that.”

Even though she’s listed as a guard, McDonald’s biggest goal is to blend in to the 4 position in Elon’s system, which is a guard/forward combination position.

“Nikki brings a lot of hard work, energy and effort to the game,” Brown said. “Sam got so many rebounds, hit 3s, and was always our player who was ready to get down and dirty. Nikki has that same mentality — she plays defense by taking every possession personally.”

Being the only freshman on the team presents McDonald with many unique challenges. One of them is her on-campus living, as most athletes room with a player on their team of the same age.

“I had to rely on myself a lot — I’m rooming with the volleyball players,” McDonald said. “So I had to wake myself up to get to practice on time. At first it was a little weird, but I’ve adjusted well.”

McDonald is selling herself a little short, if her teammates are to be believed.

“[McDonald] learns pretty quickly,” Mbouma said. “She responds really well. She goes hard regardless — even if she’s unsure, she goes hard. You know you’re going to get a whole lot of effort from her.”

For junior forward Jenifer Rhodes, who battles with McDonald in practice, the freshman’s aggression for rebounds is noteworthy.

“She goes to the boards like crazy,” Rhodes said. “You better box her out because she just works hard. For that to be her freshman mentality … I’m excited for the next four years for her.”

Smith sees the determination that McDonald has when she tries to get rebounds, and is already praising the freshman.

“She’s learning how to play at that high level in terms of intensity going to the boards,” Smith said. “I feel like she really fits into our system well, in terms of things we’re trying to accomplish offensively.”

McDonald brings many accolades with her from high school, including a two-time first team all-state player designation by the Atlanta Journal-Constitution. She was also named the Player of the Year by the Georgia Sports Writers Association as a senior.

But McDonald put basketball on the backburner when considering her college education.

“I wanted to look at academics — basketball was just a bonus,” McDonald said. “This school has really good academics and basketball. Plus, the accolades Coach Smith brings to the team and what all the players bring to the team drew me in. I really love being here. I honestly can’t envision being on any other team than Elon.”

McDonald’s first game for Elon, a 70-27 exhibition victory Sunday over Winston-Salem State University, displayed the aspects of the all-around play she’s aspiring toward. She finished with seven points, four rebounds and three steals. Smith praised her anticipation in the passing lanes.

“I thought she did a tremendous job defensively — she did a good job of sitting out in the gaps and made it look like it was open and anticipating and picking up a few steals. I was really impressed with that,” Smith said.

It’s that level of play in her first collegiate game that has Smith dreaming big regarding the impact McDonald could have.

“I think she’ll be the X-factor for us this year,” she said.