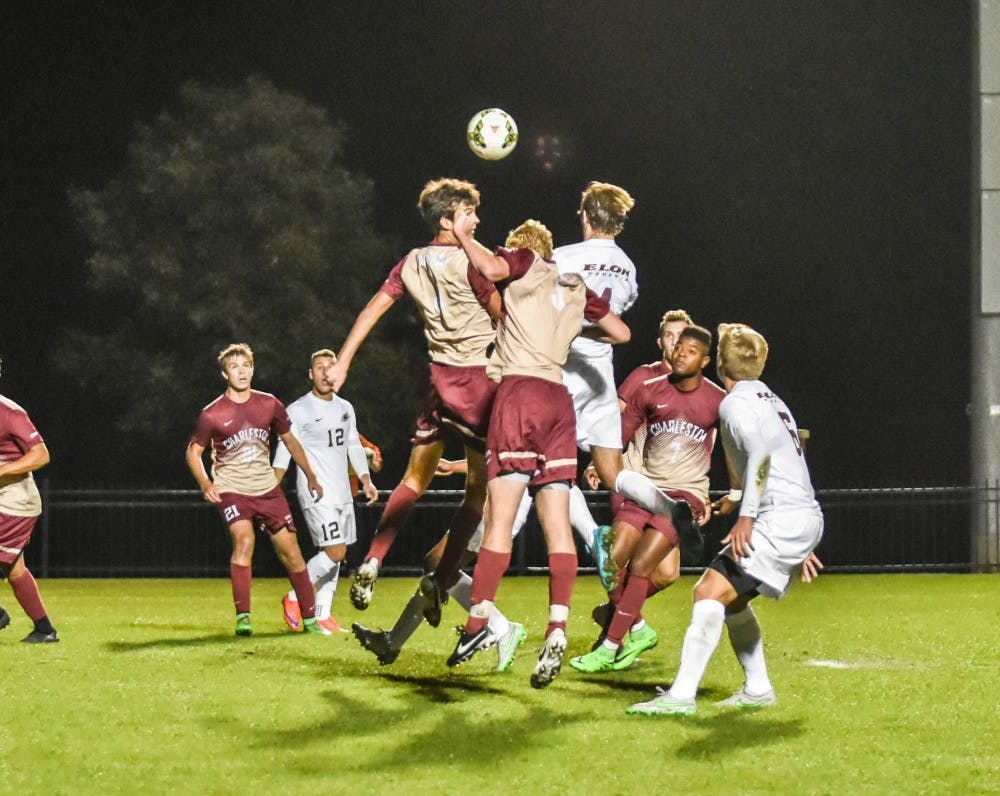 
Elon players battle for possession of a ball in the air.

The Elon University men’s soccer team was eliminated in the semi-finals of the Colonial Athletic Association (CAA) tournament following a 5-4 penalty shootout defeat at the hands of the University of Delaware. Sophomore forward Elijah Agu missed from the spot in the seventh round of penalties in his only action of the night.

The two sides were level at two goals apiece at the end of regulation and both overtime periods. Elon and Delaware also both scored three times the five mandatory rounds of penalties. The Phoenix called on a pair of players who hadn’t featured at all in the match to take its sudden death penalties.

Sophomore midfielder Luis Argudo nearly won it for the Phoenix in the 107th minute, but his shot from outside the box hit off the inside of the post and was cleared away.

The Phoenix forced overtime with a pair of second half goals. Senior midfielder Eduardo Alvarez equalized for Elon with a dramatic goal in the 87th minute. After sitting out most of the game for a first-half yellow card, the Honduras native scored from close range as Delaware failed to clear its lines from an Elon corner kick.

Elon cut its deficit in half in the 62nd minute with an own goal. A cross from senior forward James Brace was deflected into Delaware’s net by freshman defender John Schroeder.

Delaware started the match as well as Elon ended it, taking the lead in the ninth minute. Senior midfielder Joe Dipre dribbled through the Elon defense and fired a shot with his left foot that beat redshirt freshman goalkeeper Matthew Jegier, hit off the far post and went in.

Delaware doubled its lead nine minutes into the second half when Elon failed to clear its own lines on a corner kick. After a mad scramble in the box, senior midfielder Ben Sampson eventually steered the ball into the back of the net for his third goal of the season.

Delaware advances to the CAA championship Nov. 15 against the winner of the other semifinal, either James Madison University or host Hofstra University.

The Phoenix finished its season with four losses in its last five matches, and puts the chances of earning an at-large bid to the NCAA Tournament in jeopardy. Elon will learn its NCAA Tournament fate during the NCAA Men's Soccer Selection Show, scheduled for 1 p.m. Monday.