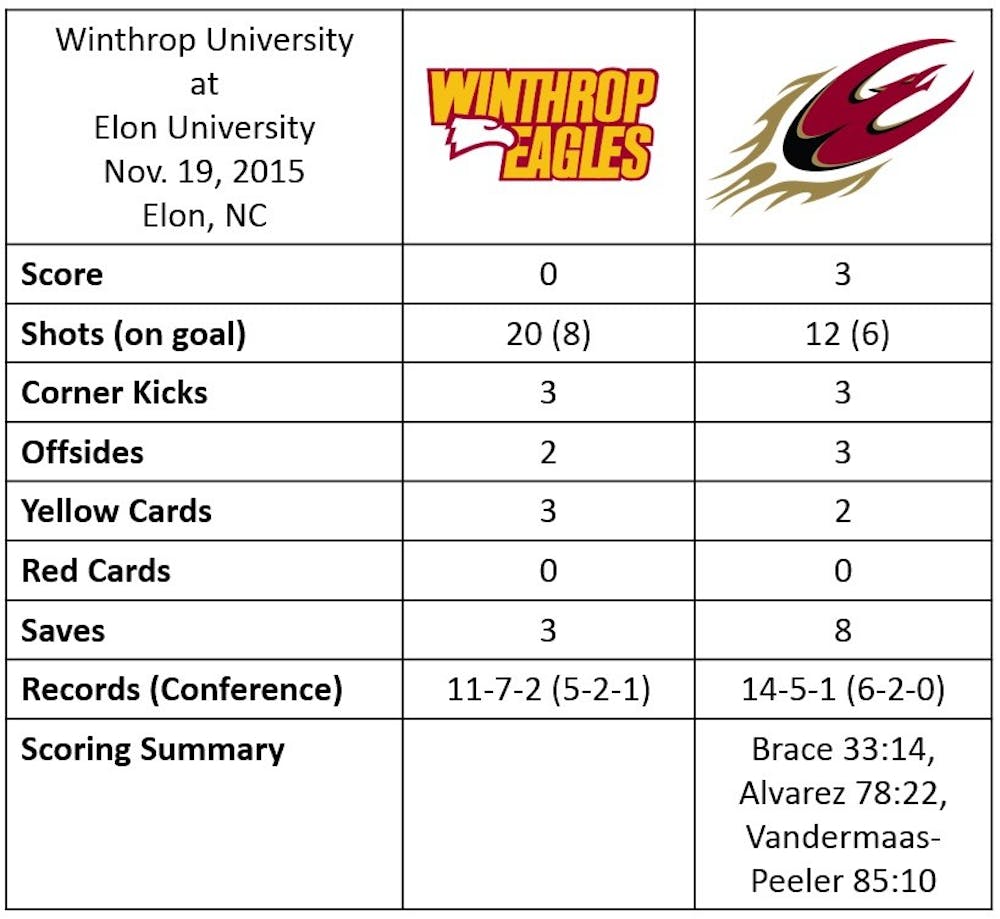 The Elon University men’s soccer team celebrated an emphatic 3-0 victory over Winthrop University Nov. 19. The Phoenix's seniors accounted for all three goals in the first NCAA Tournament win in Elon program history (2013's match with Clemson ended in a tie, 1-1).

Senior James Brace opened the scoring in the 34th minute. Freshman forward Jaiden Fortune beat Winthrop’s offside trap and whipped in a low cross from the right wing, which Brace got on the end of for his sixth goal of the season.

“When you can go into halftime in the lead, that always helps,” Brace said. “It was definitely a mentality of, 'Let’s get out after it [in the second half,]'" he said.

Elon doubled its lead in the in the 79th minute on a clinical counter attack through senior midfielder Eduardo Alavarez. Senior defender Jonathan Wenger cleared the ball to Fortune, who held the ball up before laying it off to senior defender Nathan Diehl. The Birmingham native carried the ball toward the Winthrop goal before passing it off to freshman midfielder Amir Berkane. Berkane controlled the cross calmly and played in Alvarez, who curled a shot off the far post and into the goal for his seventh goal of the season.

“If the counter is on, we’re going to look for the counter,” said senior midfielder Eduardo Alvarez. “It speaks well to our team because we can keep the ball, but if we’re defending well, we can look to counter as well.”

Winthrop waited no time in search of an equalizer in the second half. In the 50th minute, graduate student midfielder Marco Gatzke’s  shot from the top of the box was saved by the outreached arm of redshirt freshman goalkeeper Matthew Jegier. Jegier was called into action again two minutes later, diving to his left to save a shot from senior forward Patrick Barnes.

Brace could have added another goal to his tally in the 66th minute. Brace found himself alone in the box after the ball landed right to his feet after a pair of deflections, but his shot went straight at Broich.

After surviving a furious Phoenix attack, Winthrop had a few chances of its own, but Jegier made diving saves in the 69th and 70th minutes.

Jegier said he and the rest of the Elon defense expected an onslaught from Winthrop, knowing they needed a goal.

“They were on the front foot,” he said. “That was a key moment, and we knew going in we had to manage the key moments.”

Jegier’s biggest save of the sequence came in the 74th minute when he denied Hasenstab again with his outstretched right leg after the German went in alone on the Phoenix keeper.

Jegier made eight saves on the night, earning his ninth clean sheet of the season.

With the win, the Phoenix advance to take on No. 2 overall seed Clemson University Nov. 22