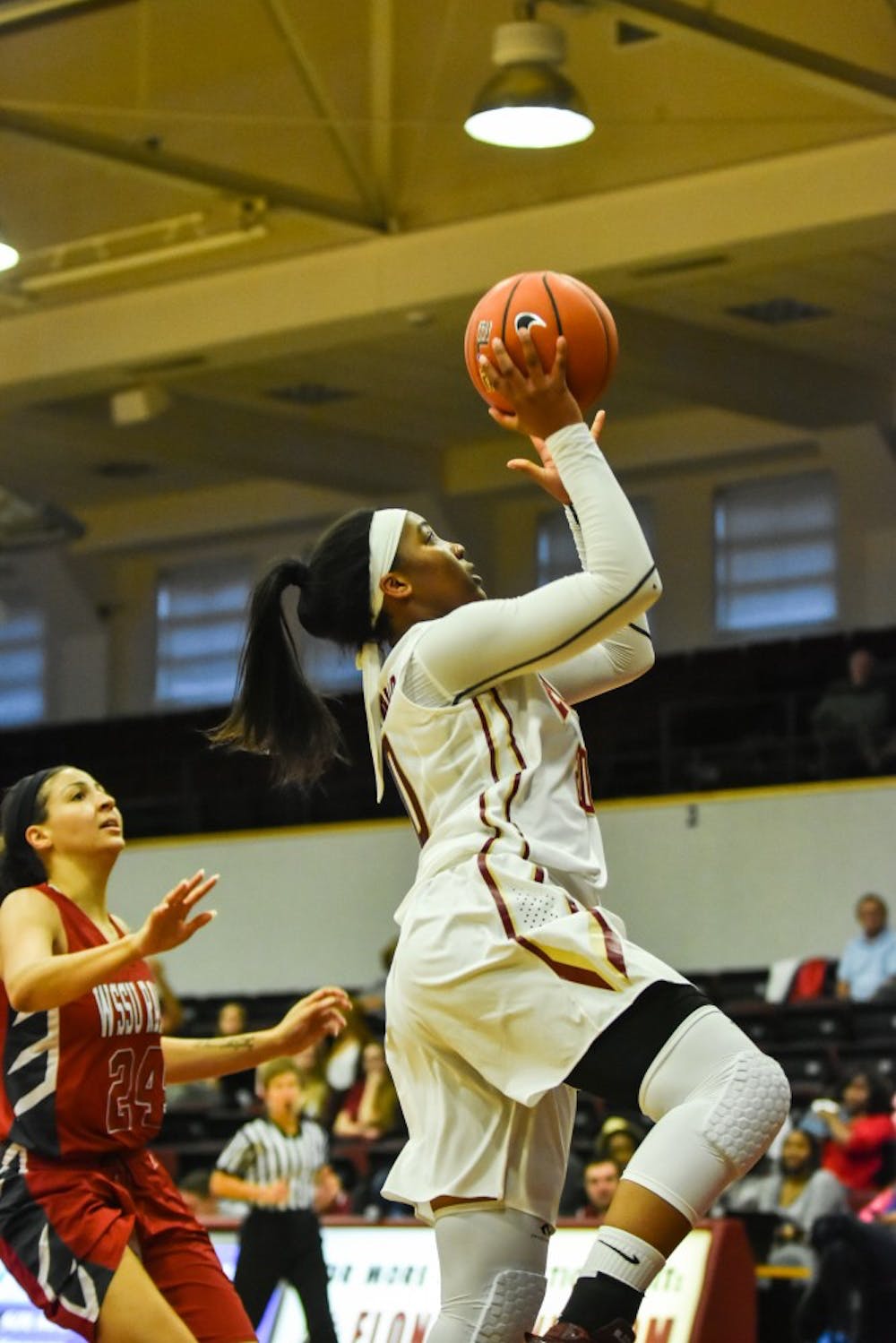 “Today, I was just crashing the boards, and nobody was boxing me out,” Burnett said.

The Phoenix went on an 18-0 run spanning 7:50 of the first quarter, after going behind early 3-2. McDonald scored eight straight for the Phoenix during the stretch, hitting back-to-back threes followed by a layup with 4:51 remaining in the first.

Burnett said it was the team’s defensive intensity and full-court pressing that sparked the early offensive outburst.

“When we went into our press defense, it seemed like they didn’t know what to do,” she said. “It seemed like there were 10 of us on the court because we were moving around so well.”

The Phoenix pressed throughout the first half, forcing 11 of Lenoir-Rhyne’s 28 turnovers in the opening 20 minutes. Elon turned the 11 takeaways into nine points.

“We try to be a pressing, up-tempo team that tries to try and force team to make errors,” said head coach Charlotte Smith. “We can create a lot of havoc on defense when we make that commitment to our press defense."

Elon dominated on the other side of the ball down the stretch holding Lenoir-Rhyne scoreless in the fourth quarter. Sophomore center Marie Ritchie’s three-pointer with 55 seconds remaining in the third was Lenior-Rhyne’s last points of the game. Smith said she asked the team what its goal was for the second half. The scoreboard showed Elon was ahead 37-19. The team decided they wanted to hold Lenoir-Rhyne to 30.

“There was maybe six and half minutes left in the game, and we kept talking about that we set a goal, let’s stay focused and let’s accomplish it,” Smith said.

The Phoenix defense held Lenoir-Rhyne to 8-51 shooting on the afternoon and 4-14 from behind the arc. Elon blocked eight shots and grabbed 14 steals as well.

Thirteen Elon players saw game time, including 11 players playing double-digit minutes. Smith said she wanted to spread out the minute as much as possible, so the team can be as fresh as possible for the quick turnaround, as Elon plays Nov.16 at Liberty University.

“[Liberty’s] not a slouch team. They’re a very good team and so we wanted to try to spread out the minutes to make sure we’re fresh for our game on Monday,” Smith said.

Elon improves to 1-0 with the victory, while Lenoir-Rhyne remains 0-0, as the game counted only toward Elon’s record.