Near triple-double from sophomore propels Elon to 90-83 win 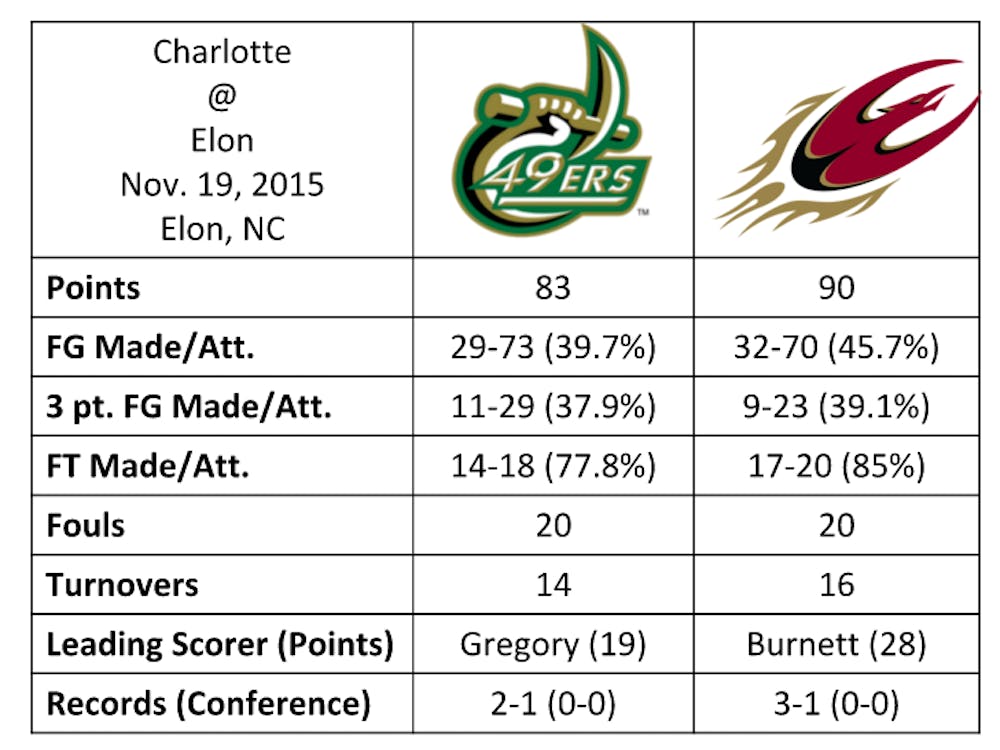 The Elon University women's basketball team survived to beat the University of North Carolina at Charlotte Thursday, 90-83.Though the Phoenix led the game by more than 20 points at one point, the 49ers mounted a late comeback to make the score close.

"Coming off the screens, I would pull up some and drive some and keep them on their feet so they wouldn't know what we were going to do," she said.

Elon built on its lead in the second quarter. A three-pointer from junior guard Lenaira Ruffin gave the Phoenix a 41-22 lead. The Phoenix never led the period by less than 10 points. With 32 seconds to play in the half, senior guard Josepha Mbouma unloaded a triple to give the Phoenix a 23-point lead, 56-33. Elon shot nearly 53 percent from the floor in the first half, while Charlotte was limited to just 32 percent.

"We shot the ball really well in the first half," said head coach Charlotte Smith. "We executed, we shared the basketball, and that was one of the things we talked about coming off the loss from Liberty."

Charlotte found an offensive spark after halftime. Down 21 at the start of the half, the 49ers chiseled the Phoenix lead down to eight at the end of the third quarter, with sophomore center Malaya Johnson missing a lay-up for Elon as time expired. The 49ers finished the period on a 13-2 run that lasted just more than 3.5 minutes. The Phoenix led at the end of the third quarter, 69-61.

Charlotte's momentum carried into the fourth quarter, as the 49ers tied the game with 3:13 remaining in regulation. Elon regained the lead on a jump shot from junior forward Jenifer Rhodes. Four key free throws from Burnett secured the 90-83 victory for the Phoenix.

"We had to calm each other down because we were fouling too much," said Burnett. "That's how Liberty came back on us and won, because we play everybody at the foul line."

Aside from Burnett, Johnson added a spark to the Phoenix offense, finishing with 12 points. Rhodes totaled 10 points in the contest.

The victory moves Elon to 3-1 on the season, and Charlotte drops to 2-1. Elon's next game comes on at 7 p.m. Nov. 22, when the Phoenix travels to Washington, D.C., to take on American University.