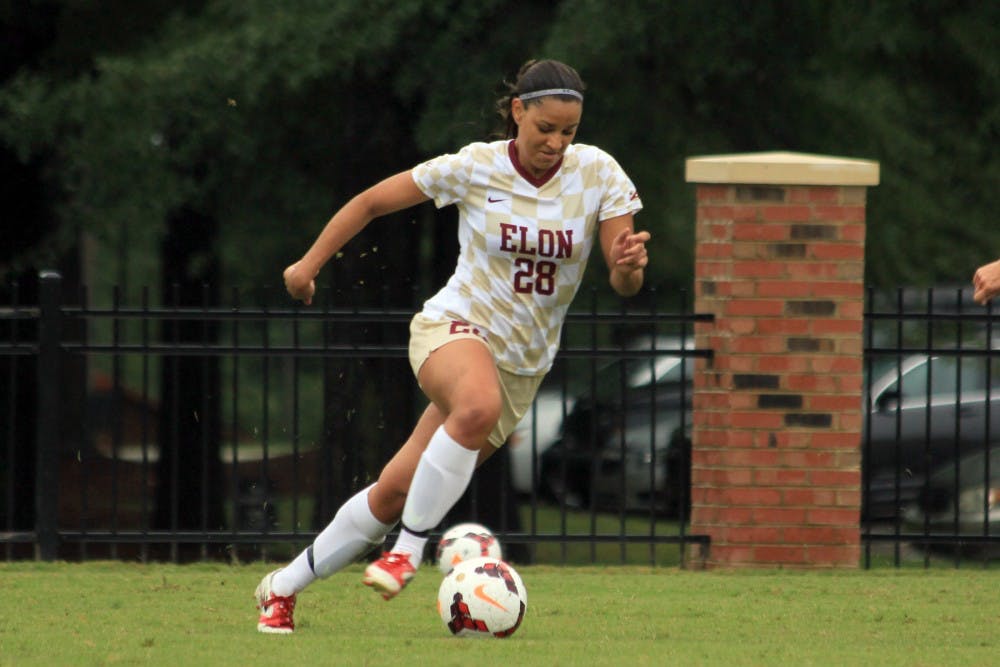 When it came to the formation that the Elon University women’s soccer team uses on the field, head coach Chris Neal knew something had to change. There were many reasons for the team’s tough 2014 season. Injuries piled up during the Phoenix’s first season in the Colonial Athletic Association (CAA), and there were many matches during which the team was undermanned and outplayed.

“Last year it was effective for 20, 30, 40 minutes, and then athletically we’d start to struggle,” Neal said. “This year we had to make a commitment to staying tighter defensively and not giving up goals.”

Last season the Phoenix primarily played in a 4-3-3 formation, with four defenders in the back, three players in the midfield and three attackers up top. Scoring only 14 goals in 17 matches last season, it was no surprise to see the Elon’s emphasis on defense this year.

“Before last season was over, we knew something had to give,” Neal said. “Traditionally, the team that wins this league gives up less than eight goals a year in conference play so we figure if we do that, we have a good chance to win.”

“We definitely weren’t connecting right,” Ballotti said. “It’s a team effort from the midfield to the forwards, and we were just missing that connection last year.”

The Phoenix shifted to a more defensive-oriented formation for the 2015 season, switching to a 4-5-1, and taking advantage of one of Elon’s strengths: its depth in the midfield. Of the 13 midfielders on Elon’s roster, 10 have received significant playing time, demonstrating the emphasis the Phoenix puts on their midfield performance.

“We’re going to concede certain spaces to teams, spaces that we want you to have, but the space we’re not going to let you have is the most dangerous space,” Neal said. “You want it, you’re really going to have to earn it against this team.”

Though the switch seemed to be primarily a defensive strategy going into the season, it has worked in favor of the Phoenix offense. Scoring 17 goals via nine different players, Elon has scored more goals in its first 11 games than all of last season.

“As you can see, we still don’t struggle to create chances,” Neal said. “Maybe not as many as the other team, but again, we’re conceding certain spaces that we want to concede but we’re putting more behind the ball, not conceding dangerous spaces, defending better one-on-one.”

ww said the switch will continue to give Elon more opportunities up front.

“I think transitioning into this going forward gives us a better opportunity to have that connection and have a whole team unit to push forward and to defend as a unit as well,” she said.

Regardless of tactics and formations, Neal said the team’s turnaround comes down to the play on the field.