Building success from the back 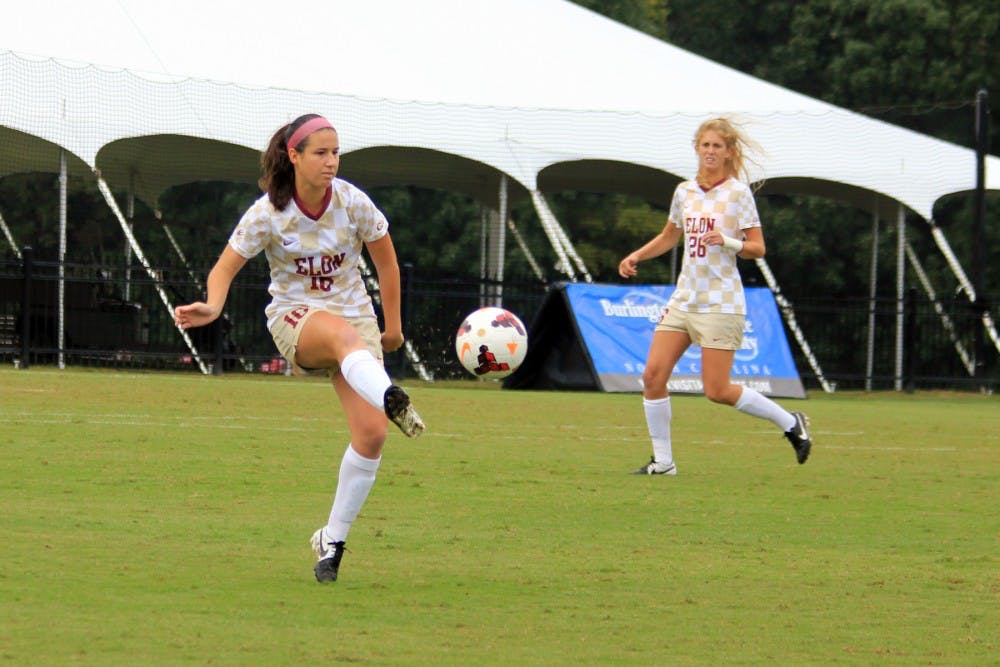 The past two seasons have told different stories for the Elon University women’s soccer team. The 2013 team scored twice as many goals as it allowed, collecting 56 goals and surrendering 28 in the 22 matches the team played.

But in the 2014 season, its inaugural in the Colonial Athletic Association (CAA), the Phoenix scored 14 goals and allowed 34 in the 17 matches the team played last season, not giving up many more goals than the previous year, but scoring quite a bit less.

Through its first 11 matches of the 2015 campaign, though, the Phoenix has outscored its opponents 17-8, including six shutouts.

“It’s been a two-year shift,” said head coach Chris Neal. “Although we’re scoring more goals this year [than last year] — realistically with this conference switch — with the quality of these teams, we’re not going to put up those same numbers, at least not [in] the first couple of years.”

For Neal, the success Elon has so far this season is the result of a new mindset around Rudd Field, where the team now focuses on defense first.

“There’s definitely a defensive shift, there’s no doubt about it,” Neal said.

A unique element about the defensive success this season for the Phoenix is the rotation of the players defending. The backline for the Phoenix defense is generally a three-person line that includes junior Kara DeGuisto, junior Sarah Henson and sophomore Kendall Ballotti. But only Ballotti is labeled as a defender on the official roster — DeGuisto and Henson are tabbed as midfielders.

DeGuisto, who had played primarily as a midfielder during her Elon career before this season, wasn’t new to defending, but she definitely had to retrain herself to think in that mindset.

“We had video sessions to get me more accustomed to playing center back because of positioning and moving and things like that, because it’s not the same as being a midfielder — you can’t mess up as much,” DeGuisto said.

In the beginning of the season, DeGuisto worked with her coaches to become a major piece of the defensive wall for the Phoenix. So far, she is second on the team in minutes played behind Ballotti, the other center back.

Henson also had to learn how to be a defender, but she had a different learning curve than DeGuisto.

“I love playing outside back and being able to get forward, which is one of the things we focus on as a team,” Henson said.

Among the defense, Henson is typically the most likely to push up the field — she has been involved in set pieces and corner kicks much more often than her defensive counterparts. It wasn’t very difficult for her to figure out, but she admitted that there’s a balance to it.

“I mean, you just have to read the situation,” she said. “There’s not always a chance to go forward but when you do have that opportunity Coach Neal wants us to go forward and created a chance on goal if we can, just affect the game but be smart at the same time. When the opportunity presents itself, you have to make something happen.”

‘As many shutouts as possible’

Before the season started, Neal researched CAA history and found a common trend.

“The traditional Colonial Athletic Association regular season champion gives up eight or less goals in the league,” Neal said. “If we can do that, we have a good chance of winning the league.”

Shutouts, while difficult to obtain, are the easiest path to this magic number of eight goals — and the Phoenix has already had more shutouts through 11 matches (six) than it did all of last season (four), which speaks volumes about the team’s commitment to defense.

“That’s definitely one of our goals — as many shutouts as possible,” DeGuisto said. “We’re also focusing on not giving the ball away in our defensive third because obviously, we’re the last line of defense and you can’t make as many mistakes back there. We pretty much focus on controlling the ball and keeping it moving.

Henson agreed and definitely thought shutouts were attainable for the Phoenix.

“We’ve really decided to hunker down and just refuse to let anything get by us,” she said. “We’ve had some mental lapses during the game, and when we figure out how to just not let those happen and play the full 90 [minutes], I think we’ll be able to get our shutouts.”

The results of Elon’s two conference games were promising even without victories, which includes a shutout of the reigning CAA champions (a 0-0 draw against the Northeastern University).

“I mean, the expectation is to win,” Neal said. “We saw long spells in each one of those games where we looked incredibly capable of winning those games.”

He also noted the growing chemistry between DeGuisto and Ballotti.

“Kendall’s the big kind of bruiser type that wins the ball in the air and provides the height, and Kara’s got the coverage,” he said. “She’s the speedier technician and she’s really comfortable with the ball, so they’re a good complement for each other right now.”

Junior goalkeeper Taylor Mohr appreciates the help of the backline. She said a good relationship is essential for a goalkeeper and defenders, and the team’s success thus far can be attributed to that.

“Honestly, it’s basically defending the danger zone area,” Mohr said. “The more they defend it and get to it, the less I have to do and it makes my life so much easier. Communication is very huge for a goalkeeper. You have to talk.”

The chemistry between the backline and its keeper is a key part of the defense and might be what they are most proud of so far.

“It’s very good having a good relationship both on and off the field — it’s the key to our success,” Mohr said. “If I didn’t care for these girls like I do, I don’t think we would mesh well and play as well as we do on the field.”