Football defeated at UNH, but starting QB may have emerged

Thompson has solid day for Elon in 37-14 defeat 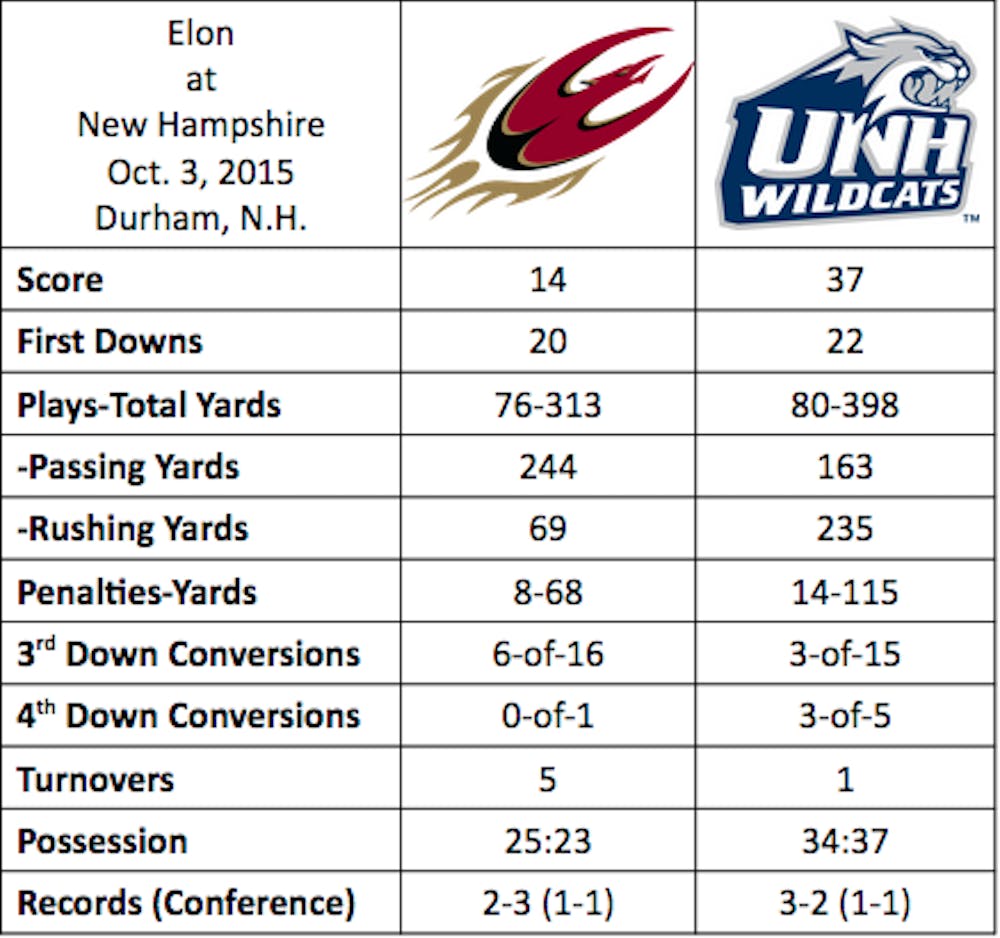 The Elon University football was blown out by Colonial Athletic Association (CAA) opponent University of New Hampshire 37-14 Saturday. But the Phoenix may have figured out who its starting quarterback will be for the season.

Freshman quarterback Daniel Thompson went 20-41 for 246 yards and one touchdown pass for the Phoenix, leading both scoring drives. Thompson didn’t play until Elon was down by 20 points, leading to an aggressive passing night. His aerial display was mixed, though, as he also threw four interceptions on the day.

Redshirt freshman quarterback Connor Christiansen got the start but struggled, going 3-11 for -2 yards. He added one interception of his own, bobbled into the hands of New Hampshire senior cornerback Lamar Edmonds.

New Hampshire (3-2, 1-1) overpowered Elon on both ends of the ball, starting right off of the opening kickoff. The first drive for the Wildcats, a 77-yard four-play streak, took just 75 seconds. Junior running back Dalton Crossan had the big play on the drive, a 36-yard touchdown run up the right sideline.

The Wildcats then scored again and again, finishing with touchdowns on five of their first seven drives, taking a 34-0 lead. Crossan added three more touchdowns from 1, 8 and 2 yards out, finishing the night with 22 carries for 149 yards and four touchdowns.

Elon got on the board late in the second quarter, with Thompson in at quarterback. Thompson avoided the rush, rolled right and hit true freshman wide receiver Tereak McCray for 7-yard touchdown.

Bennett led the Phoenix in rushing yards, with 36 on 15 carries. Joyner had five catches for 54 yards, and McCray added five receptions of his own for 69 yards and the aforementioned touchdown.