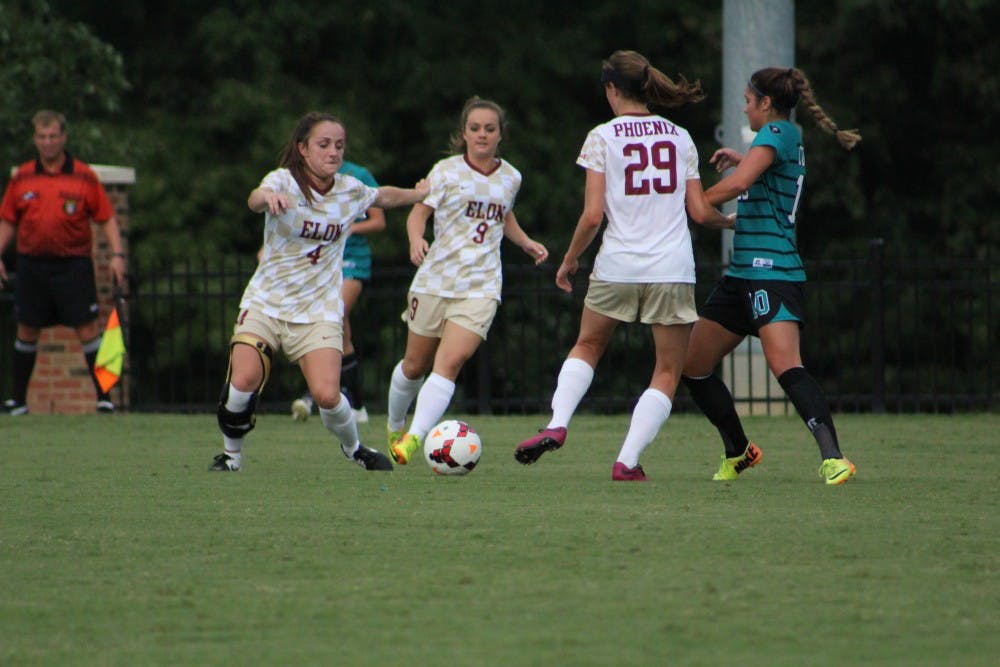 Through 84 minutes, all signs pointed to an easy victory for the Elon University women's soccer team, but a furious comeback by the University of North Carolina at Charlotte nearly drew the game. But after two quick 49er goals, senior midfielder Samantha Burch notched her second goal, this one from the penalty spot, to cap off a 4-2 win on Hispanic Heritage Night at Rudd Field.

The Phoenix had successfully stifled the Charlotte attack for most of the match, scoring a goal in the first half and tacking on two more before the onslaught of goals to end the match. Three different players scored for the Phoenix, and Charlotte sophomore midfielder Martha Thomas scored both 49er goals in their comeback effort.

The first half was largely uneventful, but with six minutes to go, Elon sophomore forward Sydney Schilling scored an unassisted goal from inside the box, giving Elon a 1-0 lead going into halftime.

The second half provided much more excitement, starting when Burch netted her third goal of the season less than four minutes into the second half, scoring off a cross from freshman forward Tori Baliatico.

"As a team we've been doing really well, and I think our midfield has been working together to create opportunities in the final third and capitalizing on our opportunities," Burch said. "It's really important, as a midfielder, to contribute in both ways so we really have to get forward and we have to work back just as much. We have to defend from the top down so everyone's involved in that regard."

The match remained stagnant for the next half hour, as the 49ers worked to get back into the game. Elon struck again in the 77th minute, when freshman forward Mariah Marrero scored her first goal of the season off a cross from Schilling.

It was all but over until Charlotte's Martha Thomas decided to mount a comeback. Thomas, who came into the match having scored eight goals on the season, netted two goals in three minutes to bring the 49ers within one. Head coach Chris Neal believes the two late goals allowed are his fault.

"I substituted too often," he said. "I think I created a little bit of uncertainty and chaos because there were too many players rotating through."

With the score just a one goal game, Elon quickly turned on a counterattack, leading to a penalty kick. Burch went left as the keeper dove right, easily finished off the penalty.

Even with the uncertainty at the end, Neal was still impressed with his team's ability to capitalize on their chances despite being out shot by the 49ers 18-10.

"We just want to make sure teams can shoot from spaces we allow them to shoot from and defend the space we don't want them to get into," he said. "If we repeat that performance, we're going to be really good going forward."

Elon moved to 7-1-1 going into their next match Sept. 25 against Northeastern University. Charlotte dropped to 4-5.