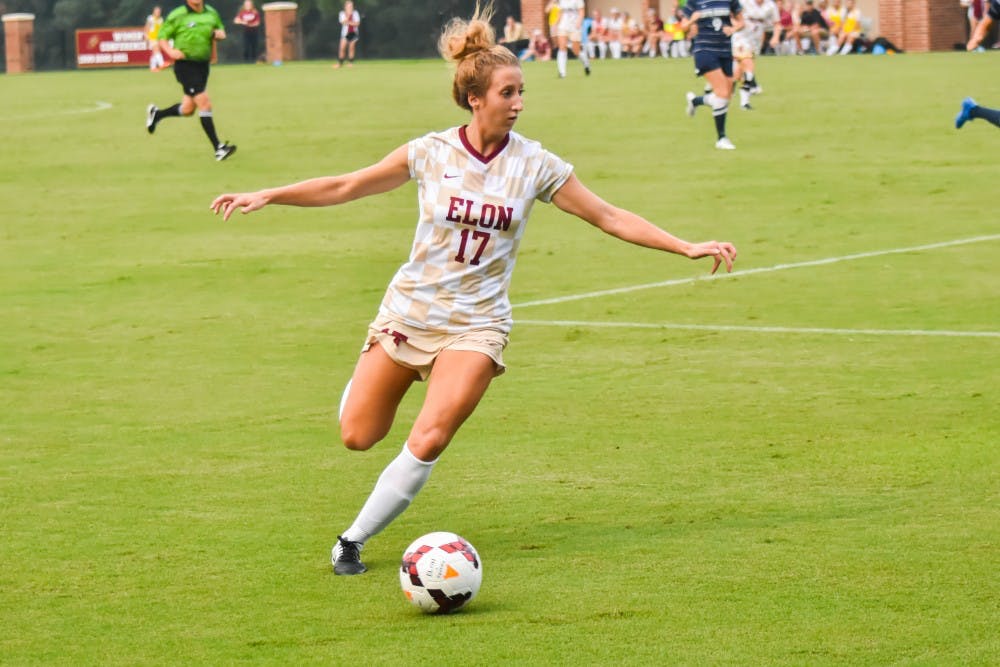 Going into the 2015 season, the Elon University women’s soccer team had plenty of reasons to feel optimistic. Although the Phoenix had a poor 2014 campaign, there were plenty of signs pointing to resurgence.

Through nine games, it’s difficult to argue those signs were wrong. The Phoenix is 7-1-1 after its latest win, a 4-2 home victory over the University of North Carolina at Charlotte.

While the Phoenix has one nonconference match remaining (an October contest against Francis Marion University), it’s done with the bulk of its nonconference play and can now turn its attention to Colonial Athletic Association (CAA) play.

Conference play wasn’t kind to Elon in 2014. The Phoenix finished last in the league with a 1-8 mark, its only conference victory a 2-0 win over the University of Delaware on Elon’s Senior Day. Elon was only one of three schools to not reach double digits in goals scored in conference play and had the largest goal differential (-20) of any CAA team.

The 2015 nonconference campaign has been much different for the Phoenix, as it rides a seven-match unbeaten streak into its first conference match, at home against Northeastern University Sept. 25. The team has scored 17 goals in nine nonconference matches, allowing only six goals in that span, including four shutouts.

The Phoenix has played teams from several different levels of competition, taking on opponents from the Atlantic Coast Conference, the Atlantic 10 Conference and Conference USA, among others. The current goal differential of +11 is 16 goals better than its nonconference output last season, an encouraging sign for head coach Chris Neal.

“We played some good games, and we’ve played some really good teams, and we’ve won, so we’re confident,” he said. “We’ve had good competition, so I think it was an excellent experience. I like where we’re at right now.”

To close out a three-game CAA home stand, the Phoenix welcomes the College of William & Mary, ranked No. 23 in the country before a 2-1 overtime loss against Princeton Sept. 20. The Tribe is 6-2-1 on the season and has fared better against ranked opponents, going 1-1 against those in the top 25. The Phoenix also has a common opponent, as it has faced off against North Carolina State University (the Tribe defeated N.C. State 3-0 while Elon lost 2-0). Elon’s game against William & Mary last year was a 3-1 loss even after Elon scored the first goal. This match will be on Oct. 2.

Elon concludes its regular season slate against Towson University Oct. 25, the last of four road matches to end the year for Elon. Towson finished last season tied for sixth in the CAA with a 3-4-2 record. This season, the Tigers are 6-2-2 going into their first conference game against James Madison University. They started off the year losing their first two games, and have since reeled off an eight-match unbeaten streak. Last season, Towson defeated Elon 2-0 off goals in the 21st minute and the 42nd minute.

The Huskies are the first conference matchup for the Phoenix and could be one of its more difficult games. Northeastern finished 7-1-1 in CAA play last season, winning the CAA and advancing to the second round of the NCAA Tournament. The Huskies are 7-3 so far this season and coming off a 1-0 overtime victory over the University of New Hampshire going into their match against the Phoenix. One player to watch out for is sophomore forward Kayla Cappuzzo, who has five goals so far this season. The Huskies defeated the Phoenix 4-0 last season at Rudd Field and will be hoping for a better performance against one of the CAA favorites this season.

University of North Carolina at Wilmington (7-3-0)

After a nonconference matchup against Francis Marion, the Phoenix gets back into CAA play Oct. 5, traveling to Wilmington, for a matchup against UNCW. Much like Elon’s previous CAA opponents, this will be a matchup against a winning club that has done very well this season. Last year, the Seahawks went 2-6-1 in conference play, but this season they have gotten off to a 7-3 start, defeating East Carolina University and Wake Forest University in nonconference play. The Phoenix lost 2-0 to UNCW last season after giving up two second-half goals despite outshooting the Seahawks on goal 7-4. This will be the first CAA road match of the season for the Phoenix.

Much like the Phoenix, College of Charleston has experienced success in its nonconference portion of the schedule after a rough season in CAA play last year. The Cougars have started off the year 6-3, including a 2-1 victory over South Carolina State University, the only nonconference opponent they have in common with the Phoenix (Elon defeated South Carolina State University 5-0 Sept. 6). College of Charleston goal differential has been +9 through its nonconference games, most recently a 5-0 drubbing of The Citadel. Elon lost to the Cougars 3-1 last season in its first CAA road matchup, but this year’s match will be Senior Day for Elon, which last season led to its only CAA victory over the University of Delaware.

The Phoenix will continue its string of home matches against Hofstra University Sept. 27. Last season, the team lost to Hofstra 4-1 in its CAA debut, allowing four goals after going up 1-0 in the first 10 minutes of the match. Hofstra is 6-3 so far this season, with two of its three losses coming against ranked opponents (No. 6 Penn State University and No. 24 Rutgers University). The Pride has also been scoring goals regularly — it has only been shutout in one match and scored at least three goals in four of its nine matches.

The Phoenix continues its road stretch with a matchup Oct. 18 against Drexel University, who finished fifth in the CAA last season with a 4-3-2 record. The Dragons are 6-3 so far this season, but their goal differential is a mere +1, a reflection of the close contests the team has had through nine games. There has not been a game that Drexel has been involved in this season where one side or the other scored more than three goals — a trend that continues from last year, as Drexel never allowed more three goals in a match in all of 2014. Drexel defeated Elon 1-0 last season, outshooting the Phoenix 9-1 and scoring the deciding goal in the 68th minute.

In the penultimate game of the regular season, the Phoenix travels to Harrisonburg, Virginia, to face off against James Madison. The Dukes were among the CAA’s best last season, going 7-2 in conference play and advancing to the conference semifinals. The Dukes, like several other CAA teams, have a winning record through nonconference play, sitting at 6-4 on the season, which includes victories over the University of Maryland, Seton Hall University and Virginia Commonwealth University. The team has played two ranked opponents thus far, losing to both No. 25 Georgetown University and No. 9 Virginia Tech. The Dukes defeated Elon 1-0 in overtime off a penalty kick, a season-ending loss that is sure to be in the player’s minds when they meet again.

In the only matchup against a CAA opponent it defeated last season, the Phoenix plays its first of four road matches to end the season at Delaware. Delaware has had an uneven start to their season, going 5-4 heading into its CAA opener at College of Charleston. Last season the Blue Hens were a middle-of-the-pack CAA team, finishing tied for sixth with a 3-4-2 record. One player to look out for is junior forward Natalie Zelenky, who led the Blue Hens in points last season and has scored seven of Delaware’s 15 goals so far this season.