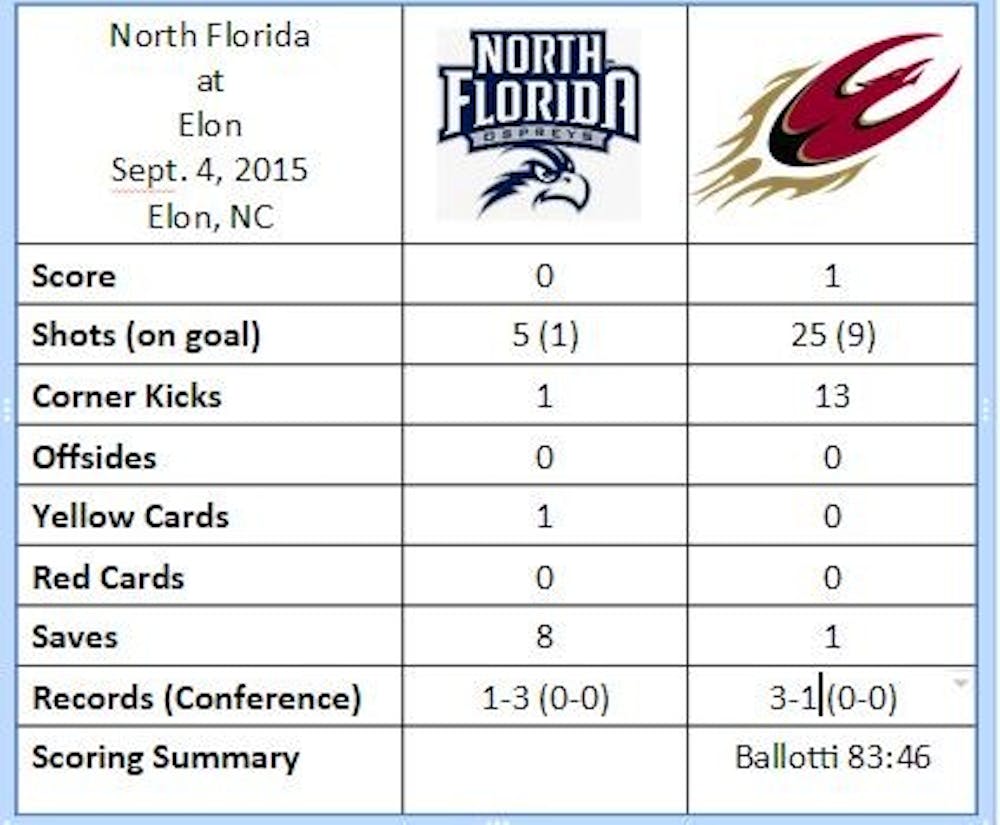 The Elon University women's soccer team had been putting pressure on the University of North Florida's team all Friday night at Rudd Field, and through 84 minutes it hadn't paid off.

After a foul, Elon had a free kick from the right wing. Sophomore defender Kendall Ballotti headed a cross from senior defender Mel Insley to the left of the keeper, giving the Phoenix a 1-0 lead it refused to give up.

Through the first three matches of the season, the team had taken 26 shots, including 10 on goal. Against the Ospreys, the Phoenix had 27 shots, and nine on goal.

"Soccer is one of the few sports where you can absolutely dominate an opponent and the result of the game is still in question," said head coach Chris Neal. "We've all seen that team get dominated and still win at the end, and it didn't happen tonight, fortunately."

The first half was dominated by the Phoenix, and a goal seemed inevitable through the first 45 minutes. The team had 12 shots in the first half coming from seven different players, including several chances off corner kicks.

North Florida had the best chance in the first half when a cross came in to North Florida sophomore forward Jess Kinlaw in the 39th minute. After the initial save, Kinlaw scored a goal that was then called off because Kinlaw used her hands to score the goal.

The second half went on in the same vein, as the Ospreys only had one shot, and none on target. The Phoenix kept coming with pressure via shots and corner kicks — eventually finishing with 13 corners — only to be denied repeatedly by North Florida junior goalkeeper Susie Ford.

Finally, in the 84th minute, the Phoenix struck. Ballotti scored on her first and only shot of the game, earning Elon the victory.

"We had a lot more chances, and I got my head on a few early," Ballotti said. "By the end I was frustrated and fed up, and I knew it was going to be one of our last chances, so I went for it."

The Phoenix were also helped tremendously by junior goalkeeper Taylor Mohr, who turned in an impressive match in her first start of the season.

"Taylor's been very professional," Neal said. "She's just kept her nose down, kept working down, and she's the epitome of a teammate tonight."

Neal was also encouraged about scoring off a set piece, which he mentioned was a part of the goals for the season, stressing the importance of scoring through free kicks and headers.

"Every match, we have a goal of winning the set piece battle," he said, referring to the high amount of goals that are scored through set pieces in conference play.

After having one chance after another all night long, Neal was relieved that the team's hard work paid off.

"If ever a team deserved to win one I think tonight was the night," he said. "We're getting better at a rapid pace."

The Phoenix (3-1) travels south for its next match 2 p.m. Sept. 6 against South Carolina State University. North Florida dropped to 1-3.