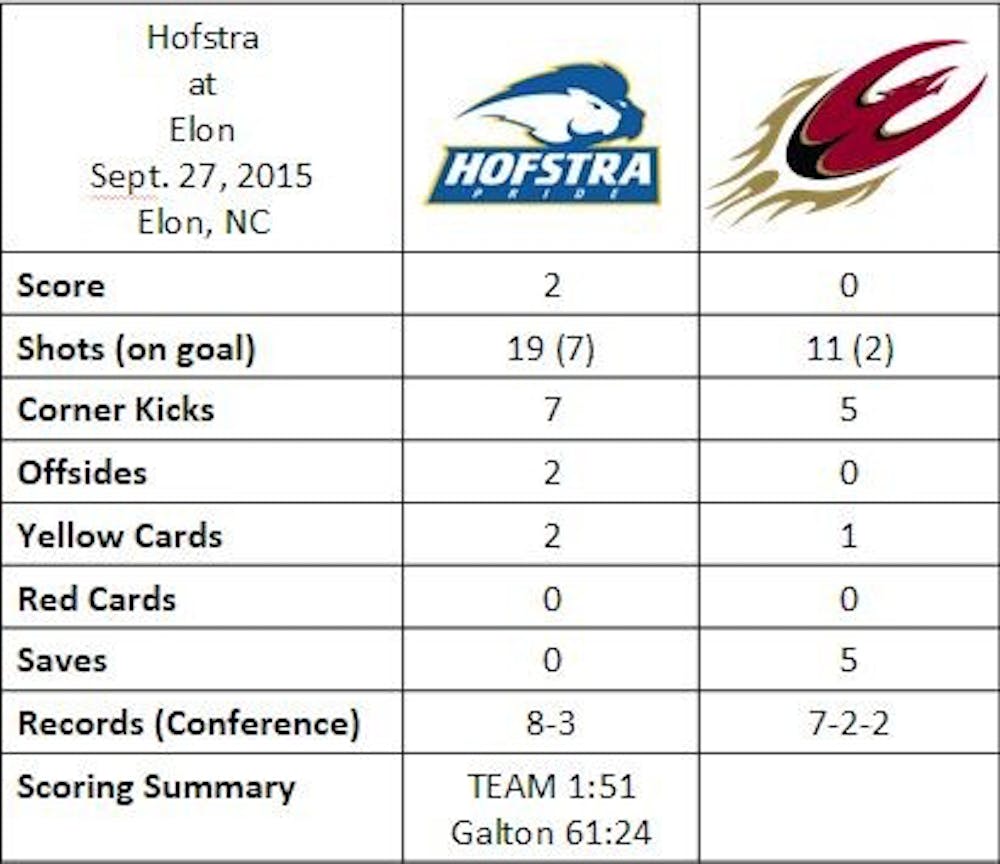 The Elon University women’s soccer team hadn’t been behind in a game since its second game of the season, a 2-0 loss to North Carolina State University. Nevertheless, two minutes into Sunday's match against Hofstra University, the Phoenix gave up an own goal to fall behind. A second-half goal by the Pride capped the scoring in a 2-0 victory over the Phoenix at Rudd Field.

Before the crowd could even get settled, the Pride was already on the board from the Phoenix own goal. Hofstra senior striker Leah Galton took a shot that Elon junior keeper Taylor Mohr saved, and Elon sophomore defender Amanda Lasater couldn’t clear it off the line, putting the Pride up a 1-0 lead that it carried into halftime.

“There’s a reason [Galton's] the back-to-back conference player of the year,” said head coach Chris Neal. “She affected the game in a serious way in the first two minutes, and if we play them again we have to do a better job of knowing where she’s at and getting closer to her and getting tighter.”

Hofstra continued to put the pressure on in the first half, out-shooting the Phoenix 11-4. Elon began to put on pressure of its own in the second half early on.

“We just committed more numbers forward. You have to be willing to take risks sometimes, and I was willing to do that,” Neal said.

The approach worked at first for the Phoenix — the team got multiple shots in the first minutes of the half — but the defense was left exposed. Galton doubled the lead in the 62nd minute, sliding to finish a cross to beat Mohr on the left side for a 2-0 Pride lead.

A bright spot in the shutout for the Phoenix was Mohr, who finished with five saves on the afternoon in what was only her first loss of the season in eight appearances.

“Honestly, I’m the type of goalkeeper that likes having pressure,” Mohr said. “Granted, it’s great when you’re team is playing so well you don’t get anything, but I love to face a challenge and I love to deny shots, so that’s my strong point. I was perfectly fine with backing up my team — that’s what I’m there for.”

Neal was also encouraged by the play of the team in the second half.

“Other than the one defensive lapse that cost us a goal [in the second half], I thought we did a great job creating in the second half," Neal said. "We gave ourselves chances to score and just didn’t take those chances.

“To the players’ credit, we haven’t worked on down-goal tactics all year, so on the offensive side they did exactly what we hoped they would do. On the defensive side, there was a slight bit of communication which wasn’t the players fault — it’s just new territory for them.”