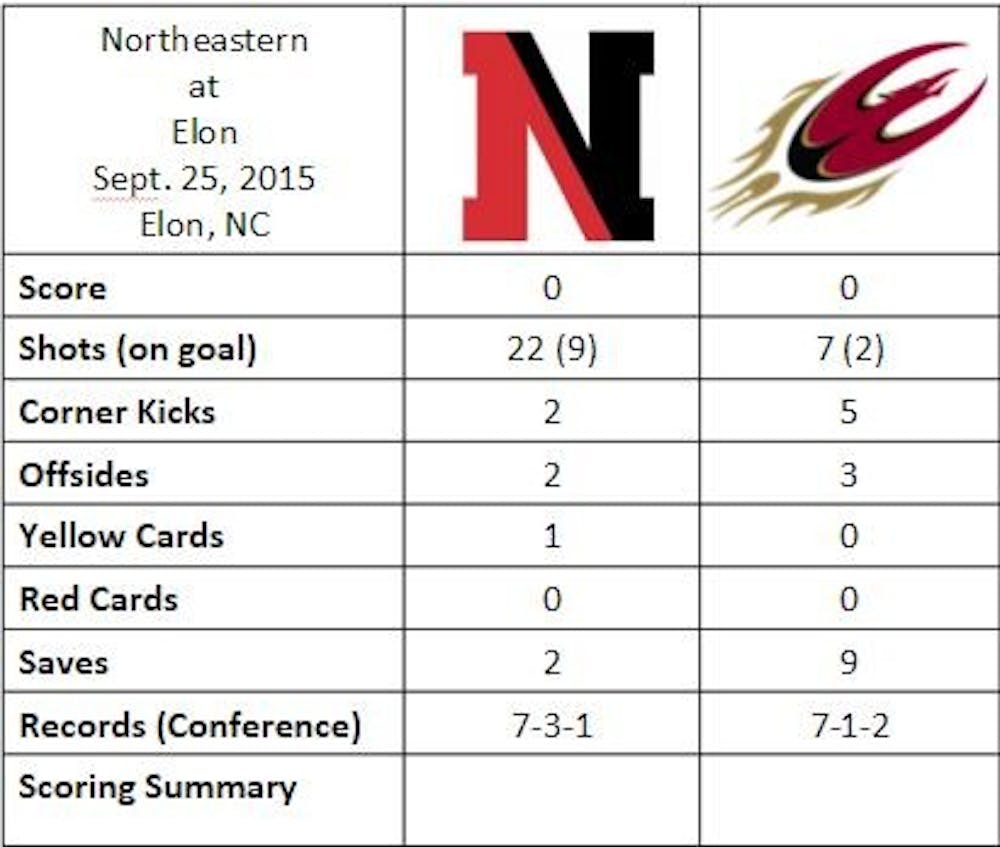 In several games during the Elon University women’s soccer team’s nonconference schedule, the team took dozens of shots but was unable to break into the scoring column.

In its match against Northeastern University, the Phoenix was on the other end of the spectrum, allowing 22 shots but no goals in a 0-0 two-overtime draw Friday night at Rudd Field as Elon opened Colonial Athletic Association (CAA) play.

“Our goal is not to out-shoot people, it’s to get results — and that’s a massive point in the CAA, in my opinion,” said head coach Chris Neal.

“We’re light-years ahead of where we were last year. Northeastern is an incredible team, I think we are a very stubborn team defensively that is hard to beat,” Neal said.

Northeastern, the two-time defending CAA champion, had plenty of advantages over the Phoenix. The Huskies took 11 shots in the first half, while the Phoenix failed take a shot on the offensive end. Junior keeper Taylor Mohr came up big several times for the Phoenix in the first half, making multiple saves off Northeastern crosses, the Huskies' main mode of attack throughout the night. A particularly big save came in the 27th minute when she made a foot save in the face of the goal to deny a clear goal-scoring opportunity for the Huskies.

Elon came out with a renewed vigor in the second half, playing the aggressor much more than in the first half. Though the team only had two shots on goal the entire match, the Phoenix constantly pressured the Huskies in the second half and withstood a valiant offensive effort on the defensive side.

“We just worked together and we just clicked,” said sophomore defender Kendall Ballotti. “We know that once we connect one or two passes together and we start playing with our defense, receiving balls from the midfielders and playing out of the midfield, we work as a unit very well and we were able to do that tonight.”

Another bright spot for the Phoenix was junior keeper Taylor Mohr, who had a career-high nine saves in the match and kept her record unbeaten this season at 5-0-2.

“We know we are a completely different team than we were last year, and anyone can see it if you compare it from last year to this year,” Ballotti said. “It’s an amazing feeling, all that hard work that we put in since the beginning of the preseason through the first non-conference games to now. We just have to put all of our strengths onto the fields, and it shows we’re here to compete.”