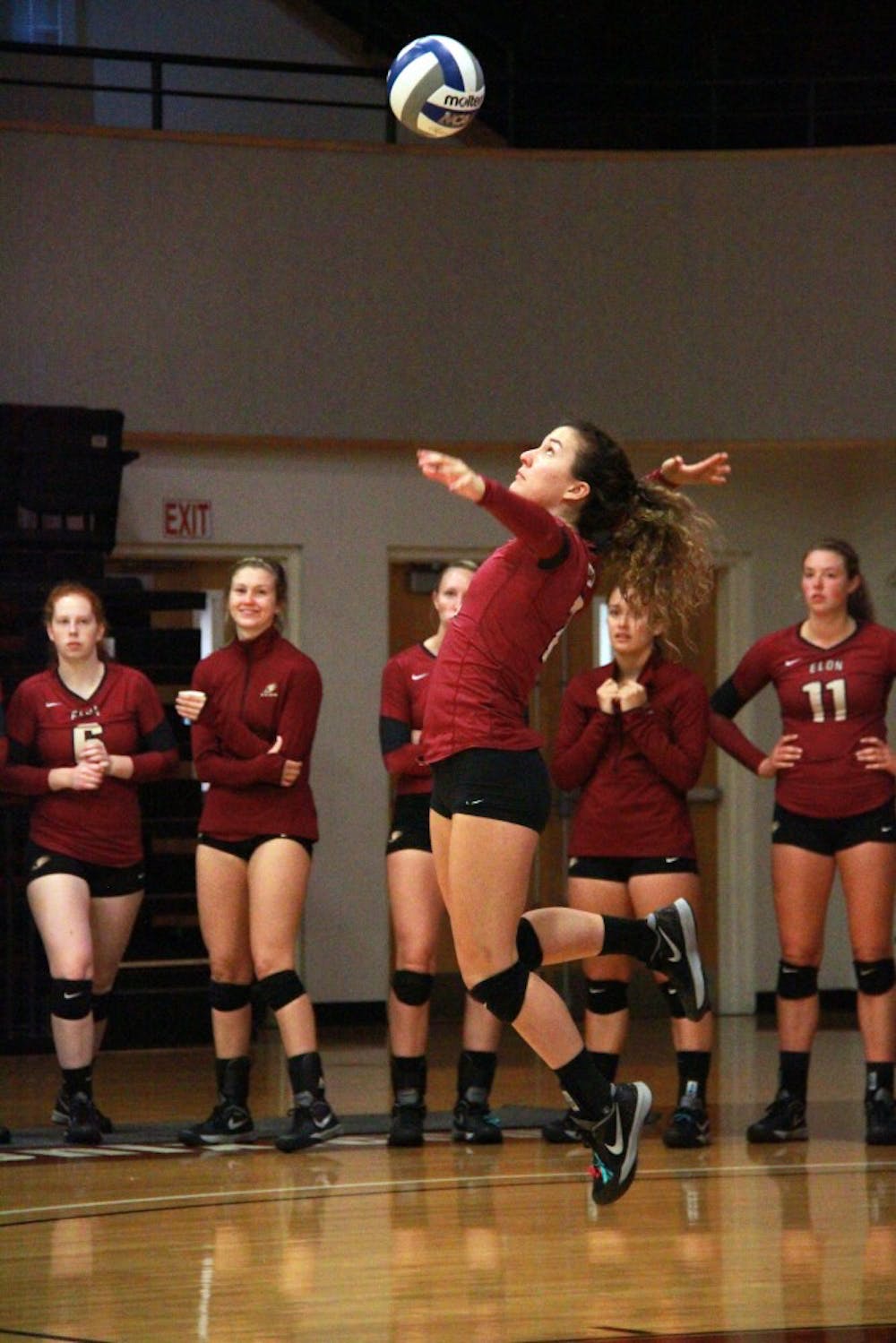 In its first contest of the day, the Phoenix played some of its most cohesive volleyball of the season thus far, sweeping North Carolina Central University, 3-0.

“We had such good rhythm going offensively,” said head coach Mary Tendler. “Our hitters found the open areas of the court, and they made some aggressive swings.”

Elon started the match with a 10-1 run, led by senior outside hitter Megan Gravley's three kills during the opening stretch. The Phoenix controlled the set, leading by as many as 12 and winning 25-13. The second set had a similar result, as Elon won the set by the same 25-13 score.

"We stayed a lot more disciplined today, especially on defense and blocking," said freshman defensive specialist Maddie Jaudon after the win. "We got to our spots, [and] we trusted in each other."

Set number three proved to be the closest against North Carolina Central. The Eagles, rejuvenated after the intermission, started things off with a 5-2 run. But Elon fought back. The Phoenix took a 10-8 lead after back to back kills by junior outside hitter Ebony Scott and never looked back, extending the lead to eight. North Carolina Central pulled within four late in the set, but it would not bee, as the Phoenix hung on to win, 25-20.

"We just had to remind ourselves to stay consistent and do what we know how to do," said Scott, who finished with 11 kills and three digs in the victory.

The second match of the game didn't go as smoothly for the Phoenix, though, as Wake Forest emerged victorious, 3-1.

“They were really scrappy, and they made us fight winning the point,” said sophomore outside hitter Sydney Busa. “The long rallies, they wouldn’t give up, so we had to outlast them.”

The Phoenix hung around in the first set against the Demon Deacons, tying the score 12-12 after a kill by junior outside hitter Ally Karle. Wake Forest then found its rhythm, winning the set 25-18. The second set saw Elon rebound and lead by as many as 10, capping the performance with a 25-16 victory in the set.

The Demon Deacons came out of the intermission aggressively, winning set number three by a score of 25-17. The fourth set was close in the beginning with the teams tied 7-7, but Wake Forest pulled ahead and never let up, winning the set 25-17.

Despite losing to Wake Forest, the Phoenix took some positives from the match.

"We can compete with Wake," said Tendler. "We just have to be more consistent. In the second set, we blocked them over and over again, and they became hesitant and made some errors."

Elon's next match is scheduled at 8 p.m. Sept. 8, when the Davidson Wildcats travel to Alumni Gym to take on the Phoenix.