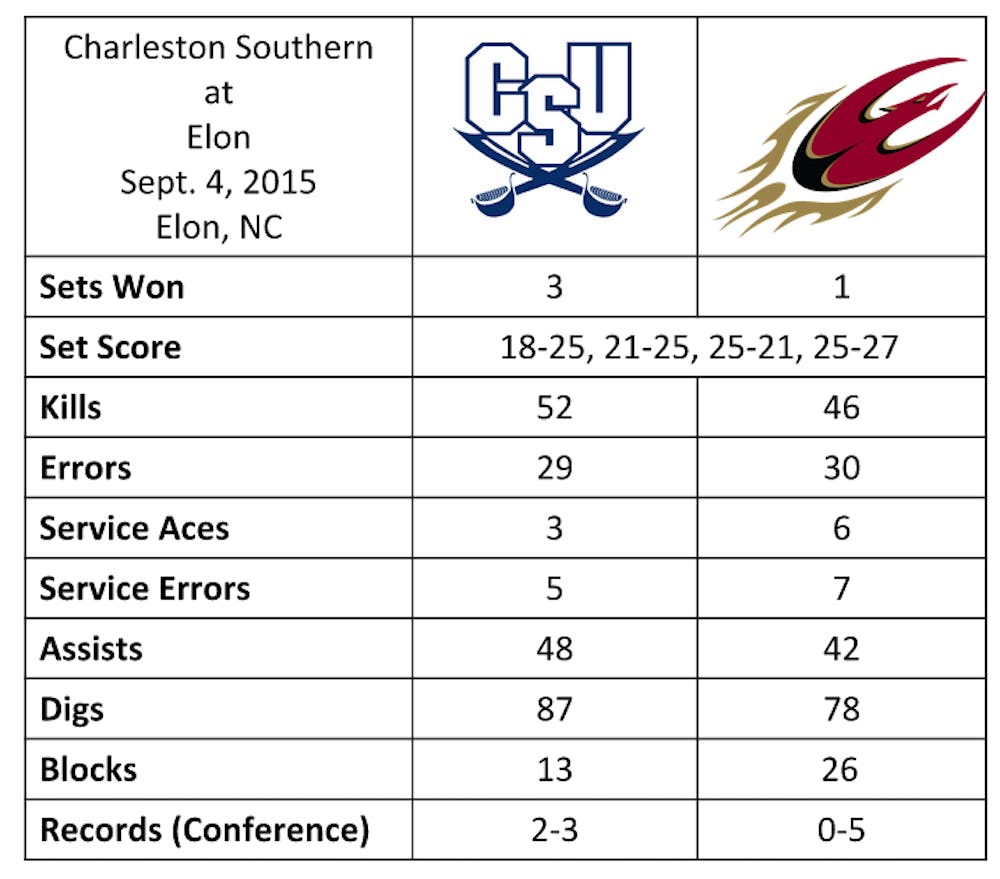 The Elon University volleyball team dropped its home opener to Charleston Southern University Friday, 3-1. The loss marks No. 5 on the year for the Phoenix, which is still seeking its first win.

"[Charleston Southern is] just a really scrappy team," said sophomore setter Sydel Curry. "They dug everything we gave to them and did all they could to never let a ball hit the ground."

Charleston Southern started the match strong, taking the first two sets from the Phoenix, 25-21 and 25-18. Elon struggled to find a rhythm in these games, trailing by double digits in the first and succumbing to the Buccaneers in the second after tying the score at 17.

"Our serve-receive wasn't very strong right off the bat," said head coach Mary Tendler.  "They were serving pretty aggressively at us. They were really smart about where they were hitting to and where they were tipping to, taking the ball over on the second contact sometimes."

Game three marked a change for Elon. The Phoenix came out of the intermission strong, opening up a six-point lead. Kills by junior middle blocker Ally Karle and senior outside hitter Megan Gravley, followed by an attack error on Charleston Southern, gave Elon set three, 25-21.

"We had some people come up with some good plays," Tendler said  about the third set. "Defensively, we were digging everything. We just need to sustain that, we need to start it at the beginning."

During the fourth set, the teams struggled for control. The Buccaneers led by as many as six before the Phoenix rallied to even the score, 24-24. But Charleston Southern would end on a 3-1 run to take the fourth and deciding match, 27-25.

Sophomore outside hitter Sydney Busa led the way for the Phoenix in kills, tallying 14. Gravley finished with 12 kills, and added 4 blocks. Curry had 35 of the team's 42 assists, and also had 12 digs on the day.

Although the Phoenix has come up winless thus far, the team hasn't come away from the experience empty-handed.

"From each of the games, we come out with a lot of positive things," said Curry. "We have a lot of spurts where we're just doing great things, and playing as team."