No. 8 Phoenix returns to winning ways over Delaware

Brace's goal is all Elon needs in first CAA win 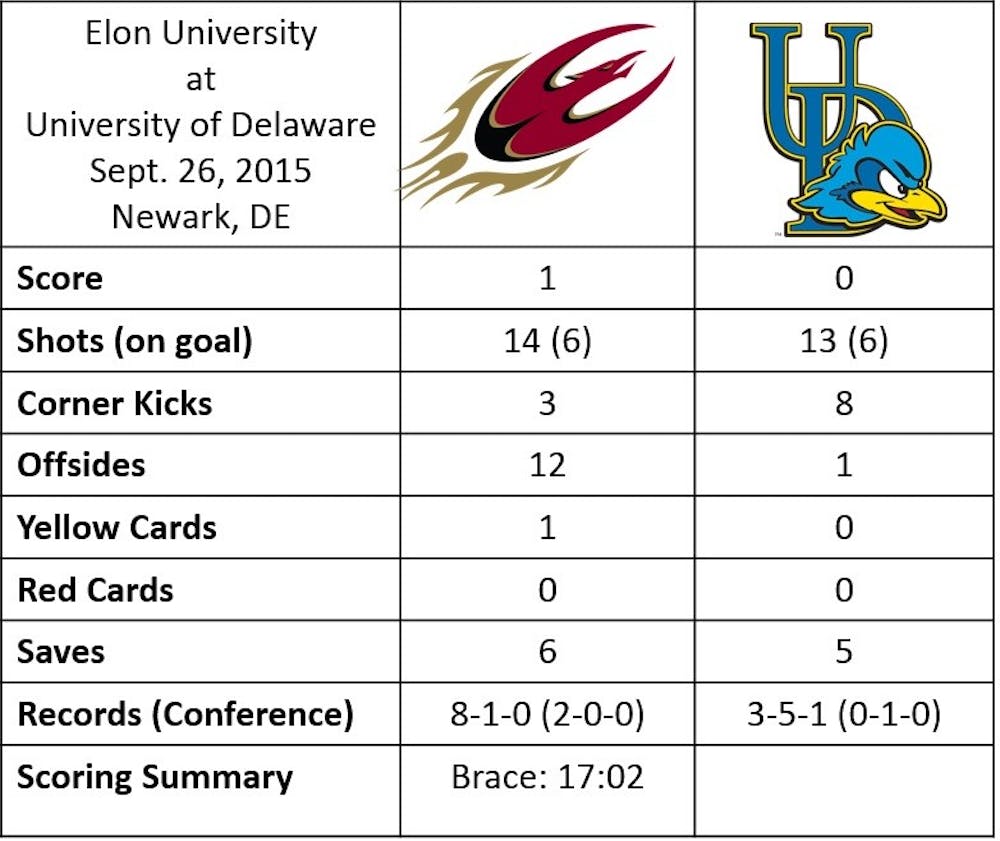 A first half strike from senior midfielder James Brace was all the Elon University men's soccer team needed in its 1-0 victory over the University of Delaware Sept. 26. The Phoenix improves to 8-1 on the year, after losing its first match of the year Sept. 22 at the University of South Carolina.

The Phoenix nearly opened the scoring in the third minute, when senior forward Caue Da Silva’s shot was deflected out for a corner. Delaware had a scoring chance of its own in the eighth minute with a breakaway on goal, but redshirt freshman goalkeeper Matthew Jegier was able to come off his line to make the save.

In the 14th minute, senior forward Cooper Vandermaas-Peeler got on the end of a long pass from fellow University of North Carolina at Chapel Hill transfer senior defenseman Nathan Diehl and found himself in on goal only for his shot to be saved by Morton.

Brace gave the Phoenix the lead in the 17th minute. After protests of offsides from the Delaware defense, Brace slotted the ball into the back of the net off an assist from Da Silva and Vandermaas-Peeler. A minute later, Da Silva had a chance to grab a goal a goal of his own but failed to convert on his breakaway opportunity.

In the 22nd minute, senior midfielder Eduardo Alvarez had another chance from a free kick around five yards from the top of the penalty box, but his shot curled just beyond the far post and the diving reach of redshirt freshman goalkeeper Todd Morton.

In the 52nd minute, Da Silva had another chance to put his name on the scorers sheet, but his low-driven shot from the right wing was smothered by Morton.

The Phoenix thought it had a second goal in the 57th minute. Sophomore midfielder Luis Argudo’s shot from the top of the box was saved and deflected to right to redshirt sophomore midfielder Will Smith only for his headed effort to be deflected onto the left post by Morton for a rare double save.

Delaware’s best chance to score came in the 74th minute. Junior forward and preseason CAA Player of the Year Guillermo Delgado’s cross from the left wing caused a scramble in the box before Jegier ultimately collected the ball.

Delaware continued to search for the equalizer and nearly found it late in the second half. Delgado’s touch took a heavy defection, which fell to junior midfielder Jaime Martinez, but couldn’t steer his left-footed shot inside the far post in the 81st minute.

The Phoenix wraps up its three-match road swing with a match 7 p.m. Sept. 30 against the College of William & Mary.