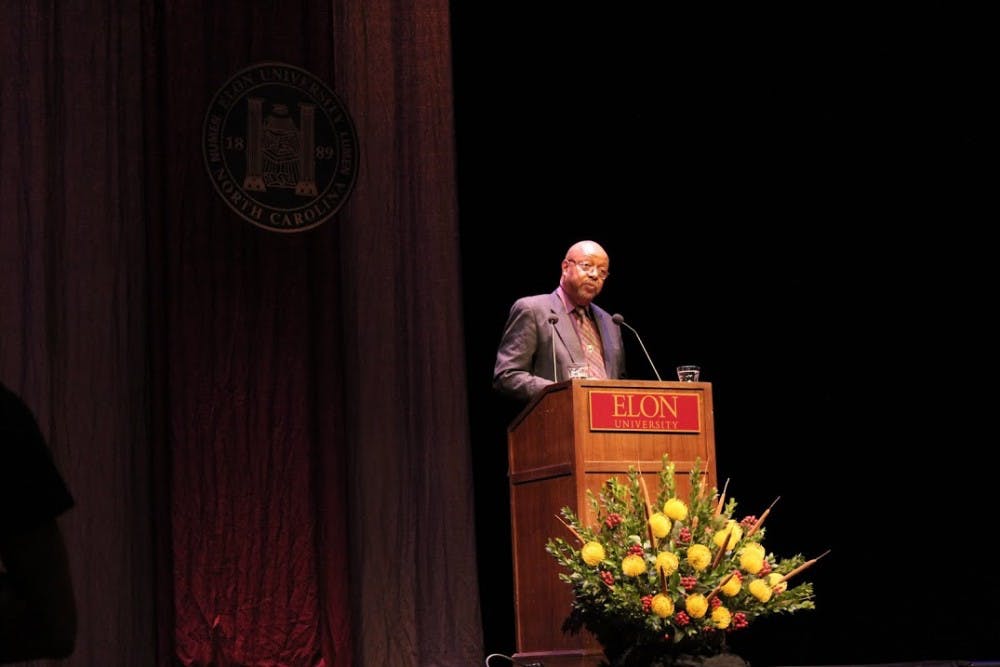 Society is in a continual struggle with the crime of innocence, according to Pulitzer Prize winner and Miami Herald columnist Leonard Pitts, Jr.

He called race in America, also the title of his speech, a "big, scary topic" and that there's an "accepted script" the nation follows in incidents where a "brown person is singled out treatment that's harsh out of proportion based on the threat."

There was the time 41 years ago, when Pitts walked out of a University of Southern California dormitory aside a white man, and Pitts was asked if he knew anything about a stolen bike. He was told he shouldn't be upset for being singled out because the school is in a largely-black area with a high crime rate.

Then 35 years ago, when he and his wife were stopped on the way home from a concert and police, with guns at the ready, ordered them out of their car. The reasoning, the policeman told Pitts, was that his tail light was smoking.

And the time nine years ago when Martin Lee Anderson, a 14-year-old from Florida, who died while incarcerated for stealing his grandmother's car after guards manhandled him and forced him to inhale ammonia. One reader told Pitts "the guards did us a favor."

Pitts spoke for 40 minutes Thursday night in McCrary Theatre, addressing this recurring theme of innocence regarding racial bias that he said has become engraved in American culture.

The topic was perhaps exemplified best when Pitts said one reader referred to the Charleston shooting as "a hoax perpetrated by liberals."

"I mention that only to drive home how critical it is to some of us, and the desperate lengths they go to, to keep that thought, that innocence," Pitts said. "... If you can't claim innocence, what are you supposed to claim, guilt? People take that quite personally."

Pitts said racism is as prevalent as ever today, and that he frequently hears from readers upset that he confronts the issue head-on.

Pitts said the last seven years have been a "brutal awakening" for those who thought lasting racial progress was made when Barack Obama was elected president in 2008.

"It never is what it actually is. Always, it is something else, something other," Pitts said about racial bias.

There is action to take, though, Pitts said. A video he saw of white people marching through the streets chanting "Black Lives Matter" stood out to him of what could be, and said "maybe you cannot march. Maybe you have no money or celebrity to give. But you can see. And you can let it known that you see."

Freshman Julian Rigsby, a member of the Black Student Union, thought the speech did its part to encourage more discussion on the subject.
"I think Elon University has come a long way, of course, from what it was 20 years ago, but we still need to get on board and start making the community a better, safer, more aware place of cultural and racial diversities," Rigsby said. "And I think we're doing a pretty good job now, but there's still room for improvement."

Freshman Kaitlin Welch resonated with Pitts' theme of innocence, striking a chord she hadn't thought of before.

"I thought it was very insightful and interesting to hear his point of view on the subject," she said. "I especially enjoyed when he talked about America's insistence on its own blamelessness because I think he is right. Often times we try and push the problems onto someone else when really they are our problems too."