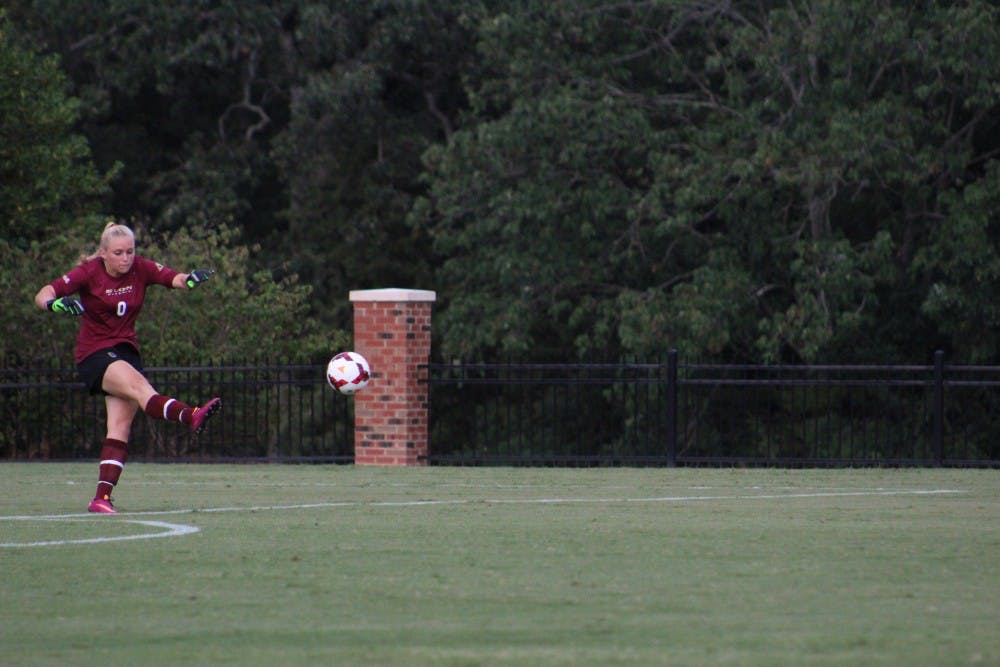 As senior defender Mel Insley stood over the ball for a potential game-changing free kick in the 66th minute, she knew she wanted to put the ball in the top right corner of the net.

She struck the ball from 20 yards out and found that top right corner, giving Elon University a 1-0 victory against Coastal Carolina University in women's soccer Friday night at Rudd Field.

“Our team and coaches are just so dedicated to our success, and I think that says a lot about what we want out of this season.”

The first half was not as lively as the second, with only a few select chances and no shots on goal. The Chanticleers’ best chance came in the 14th minute, when Madi Simons hit the ball off the crossbar and bounced inside the six-yard box. The Phoenix had a notable chance in the 30th minute on a corner kick, but sophomore defender Kendall Ballotti’s header went high.

Chances became much more common in the second half, with the Phoenix applying a lot of the pressure early in the half. Elon almost took the lead in the 60th minute when a cross by freshman midfielder Nyah Spearman proved to be too high for sophomore forward Susannah Anderson. The next best chance for the Phoenix came when Insley stepped in on the free kick, giving the Phoenix a lead it would not relinquish.

The 16 fouls that occurred in the match were indicative of how physical the game was, and while Elon committed more fouls in the first half, the teams evened out in the second half, and several of the best chances for goals came off fouls.

“We have some young players that need to figure out how to not commit fouls in critical areas, specifically our half,” Elon head coach Chris Neal said. “But it’s a physical game too, and some games bring different levels of physicality, especially close games between two teams where the margin of difference can be very slim.”

Elon has won four straight, all shutouts, and has been aided specifically by the strong play of their back line. Taylor Mohr once again started in net and recorded her third shutout in as many starts. The defense has not allowed a goal in all five of Elon's wins this season.

“I’ve always been comfortable and having this team, having these amazing players playing in front of me, that just makes me so much more confident,” Mohr said. “I’ve never come in scared, I’ve always been able to come in with confidence.”

The next match for the Phoenix (5-1) is Sept. 13 at University of North Carolina at Greensboro. The Chanticleers dropped to 3-4.