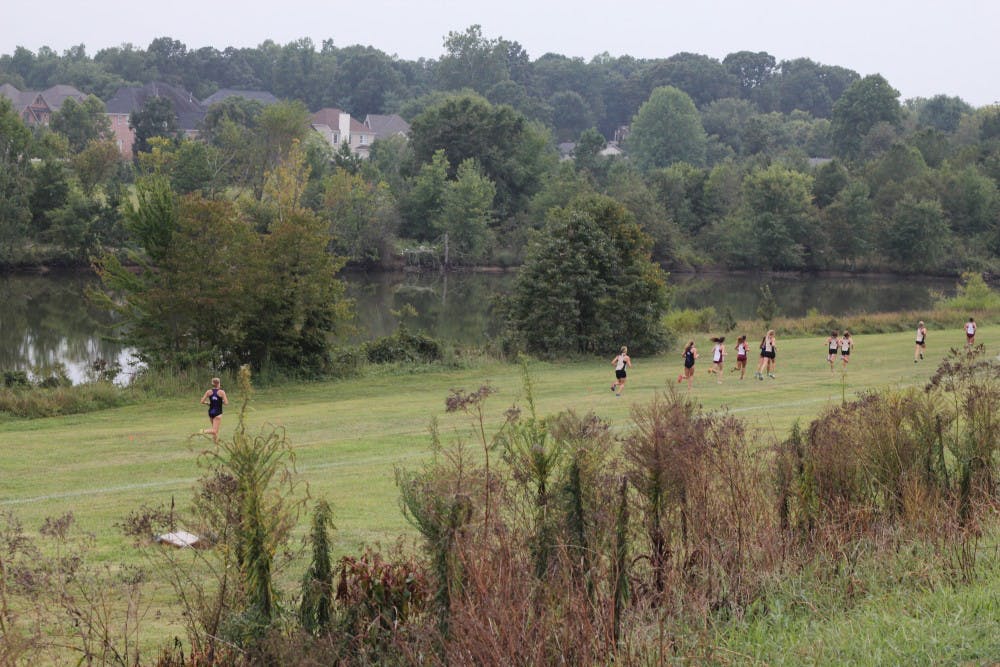 Though construction is nothing new to Elon University, campus conversation around facilities has focused on a building with no ground broken yet: a more than 5,000-seat convocation center.

Elon University announced Sept. 1 it had purchased 19.5 acres of land for a proposed convocation center, a major step forward for a project still in its fundraising phase.

Beyond the developing proposed facility, preparations have begun for the first ever Elon-hosted Colonial Athletic Association (CAA) Championship events.

At the Jimmy Powell Tennis Center, which will host the men’s and women’s championships April 21-24, 2016 along with the Burlington Tennis Center, the surfaces have been redone for the first time since 2008, and are due to be completed today.

The Jerry and Jeanne Robertson Track and Field Complex was picked Aug. 25 to host the outdoor track and field championships May 6-7, 2016. Now, the question is what will be done to improve the complex before the championship.

And finally, cross-country head coach Nick Polk said that Elon has been chosen to host the 2017 cross-country championships, which will take place on the running course at the intramural fields.

Elon University announced Sept. 1 it had purchased 19.5 acres of land for a proposed convocation center, a major step forward for a project still in its fundraising phase. In Dec. 2014, two Elon parents, Dwight and Martha Schar, pledged $12 million toward the center and the new School of Communications — the largest donation in the university’s history.

For Director of Athletics Dave Blank, the steps toward the new building are a cause for celebration.

“We’re excited about it,” he said. “We were excited about the announcement and the gift from the Schar family that is going to really get us down the road to raise the additional funding to complete this project. It’s very exciting to our coaches and our student-athletes.”

The plan is for the convocation center, which will host the two basketball teams and the volleyball team, to contain 5,000 seats. That puts the center at a capacity large enough to compete with other schools in the Colonial Athletic Association (CAA).

And, according to Blank, there’s no gray area about the proposed building.

“Alumni Gym has been awesome…but having something larger, particularly with where we compete now in the Colonial, will be a really positive thing.”

There is currently no cost estimate for the proposed convocation center.

As students returned to campus for the start of the semester, they were greeted by a hole in the ground where the Jimmy Powell Tennis Center used to be.

The frenzied construction was prompted by the July 13 decision by the Colonial Athletic Association (CAA) to have Elon University host the 2016 men’s and women’s tennis championships.

The tournament will be split between Elon and the Burlington Tennis Center, approximately a nine-minute drive from campus.

With the championships coming, the athletic department decided it was time for the courts to be resurfaced.

“The [resurface] project was due, and we got [awarded] the championship,” said Dave Blank, director of athletics. “One wasn’t the result of the other – it was just the timing that worked out.”

The courts were last resurfaced in 2008, which puts this resurfacing in line with the typical lifespan of tennis courts. The resurfacing project is slated for completion today.

“We’ve definitely got our life out of the courts,” Blank said. “It was time to redo them.”

With recent renovations to the offices and the locker room, Blank is pleased with the tennis center.

“I think we’re in a good place right now, relative to our tennis programs and their facility.”

According to track and field head coach Mark Elliston, Elon submitted a bid to host with other CAA schools.

“The way it worked out, the other programs — and situations on their campuses — started to fall around us,” Elliston said. “We were the last one standing.”

Elon is only capable of hosting thanks to a renovation of the track surface at the Jerry and Jeanne Robertson Track and Field Complex that was completed prior to the 2015 track and field season.

With a new surface in place, Elon hosted the Phoenix Invitational April 18, the first collegiate outdoor meet at Elon in nearly 10 years.

While the facility now boasts a top-class track, there are no permanent bleachers there. But according to Director of Athletics Dave Blank, Elon has plans for the seating situation.

“We’re addressing some seating,” he said. “I’m not sure of the timing of that, but sometime in this calendar, we will put concrete pads on the embankment for temporary seating for the [championships] — but it won’t be permanent at this point.”

While the seating will mostly consist of metal bleachers, Blank said there is a master plan for the complex going forward.

“Someday, it would include a press box and a scoreboard and a sound system,” he said. “But that will happen in the future, because we wanted to make sure we did the track surface first.”

But Elliston doesn’t think it will be an issue for the championship event.

“A lot of the fans and parents of track and field athletes know the drill,” Elliston said. “They bring their lawn chairs and set up around the track.”

As the reigning CAA champions, Elon will get a chance to defend its title in its home facility, which is good news for Elliston.

“We definitely want to defend,” he said. “I think the girls are excited about it, and with the new recruits in … if we can show up ready and healthy, we’ve got a good chance.”

“Other coaches come from Wake Forest [University] and High Point [University] and they say, ‘These are awesome trails,’” Polk said. “They’re envious of what we have in terms of places to run. We should definitely use that.”

The head coach said the ability to host cross country meets is a benefit both to Elon and to other schools coming to race.

“We love being able to host events in our backyard,” he said. “It was nice because teams like UNCG [University of North Carolina-Greensboro], High Point and Wake Forest didn’t have to travel far.”

What seemed to amaze Polk was that, even with the competing schools’ geographically proximity to Elon, the cross-country course was a mystery to them.

“They didn’t even know it was here until I told them,” he said. “They came, took a chance, and ran on a good course. I think that shows that we can host good meets.”

Polk said they are still working through some kinks in the hosting process, but he was impressed with how the course took the rain that hit the Elon area hard on Friday before the meet.

With another event this Saturday, Elon will see just how prepared the course is to host a championship.

“I’m looking at these meets as a tune-up for when we host the CAA Championships in the cross country season in a few years.” Polk said. “We’re continuing to learn how to run better and better meets, as we head towards that [championship meet].”

They have time, though. Two years’ worth of time.