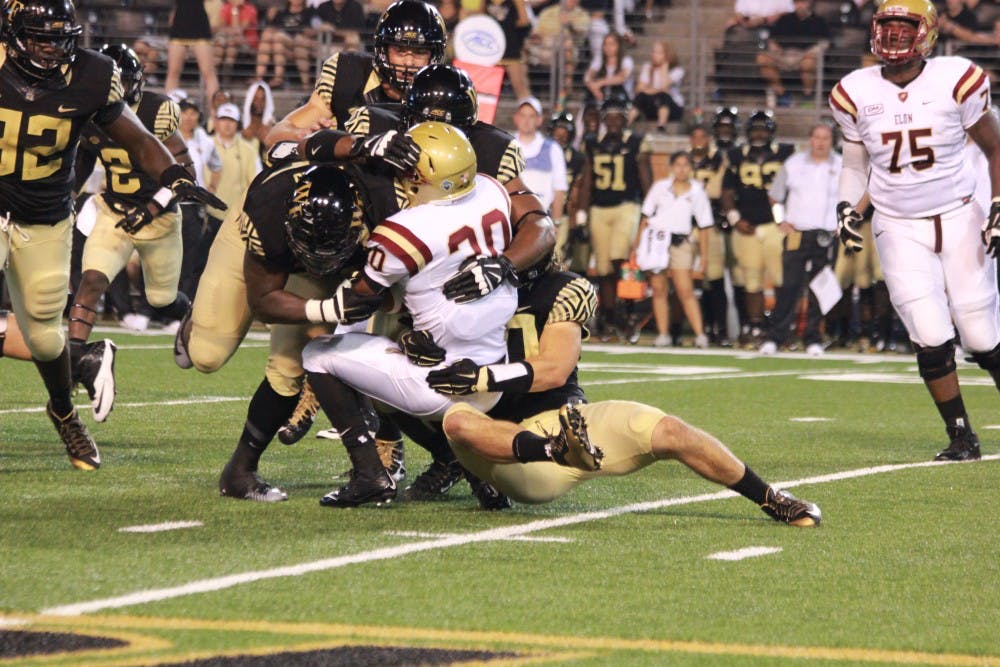 WINSTON-SALEM — About what was expected.

The offense struggled. The defense held tight for a quarter before the wheels fell off. A lot of freshmen played. And the quarterback dilemma still wasn’t resolved.

So with that, the Elon University football team left BB&T Field on Thursday night not just with a 41-3 loss to Wake Forest University, but a list of problems similar to last year.

Elon punted on all seven first-half drives, never moving past midfield. That didn’t happen until a Corey Mitchell sack backed up the Demon Deacons on their first drive of the second half, and the Phoenix took over at the Wake Forest 47.

Six plays later, John Gallagher connected from 45 yards out for a field goal.

Save for that, Elon’s offense was nonexistent no matter who was under center. But the Phoenix didn't commit a turnover.

After a quarterback competition that's lasted since the spring, true freshman Daniel Thompson got the starting nod and played the first three drives. Then redshirt freshman Connor Christiansen commanded the next two before the pair alternated on the last two drives of the first half.

So, there’s still no clear frontrunner there.

At least the more veteran defense looked sharp, though, right?

For the first quarter.

Elon limited Wake Forest to 86 yards in the first quarter on 16 plays — still an average of 5.38 yards per play — but just three points. The Phoenix had to feel good about that.

Then, the second quarter happened.

The Demon Deacons exploded for 257 yards and three touchdowns, including a 70-yard scramble by quarterback John Wolford, and Wake Forest led 24-0 at the break.

In defense of the defense (is that OK to say?), they were on the field most of the night.

Rich Skrosky held true to his promise of playing lots of freshmen. Corey Joyner was one of the top targets for the quarterbacks, hauling in three passes for 17 yards, while also returning most of the kicks. He finished with 89 all-purpose yards.

In all, the Phoenix played 12 true freshmen.

Elon has opened with an Atlantic Coast Conference team each of the past four seasons. The Phoenix has been outscored 225-16 in those games.

Next week against Gardner-Webb University should be a little closer.

But Elon enters with the same issues as it did this week.