A September to remember for the Elon defense 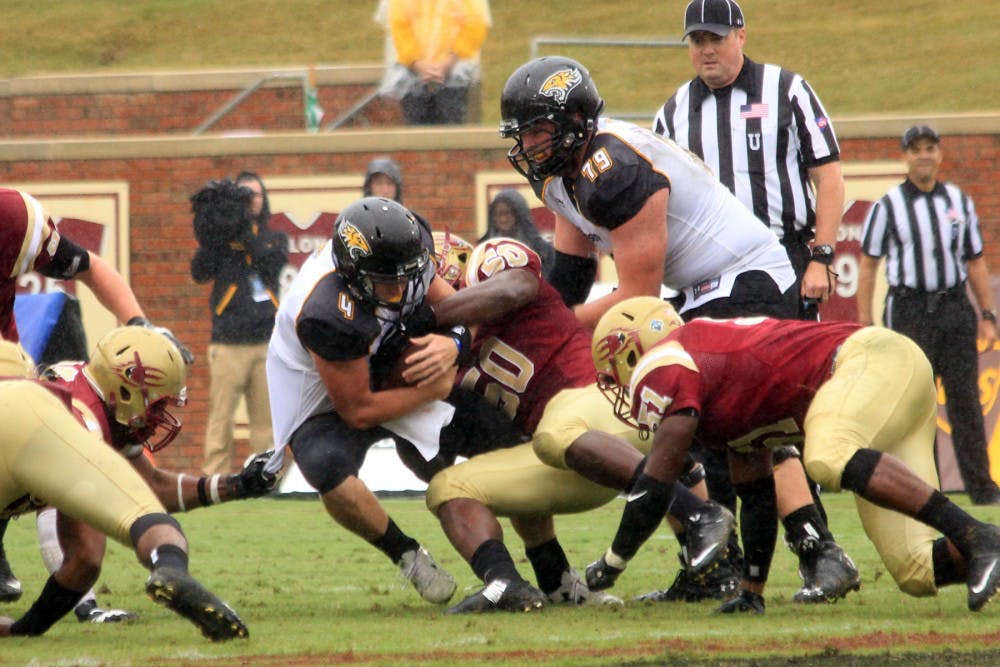 As September comes to an end, the 2015 Elon University football team finds itself with a 2-2 record and tied for first place in the Colonial Athletic Association (CAA). And it’s all thanks to the defensive unit.

After a sloppy, but thrilling, 17-13 win over Towson University on Saturday, senior linebacker Alexander Dawson, who has been at Elon since August 2011, noticed a difference in the mentality around the team.

“I’ve been here for a while, and to see the joy that comes with winning, especially at home and in the first conference game, I feel like that’s a testament to where the program is going,” Dawson said. “Players are buying into the system, and I feel like this is the beginning.

“We know we still have a lot of work to get done, but it’s definitely nice to be able to feel happiness and enjoy ourselves, knowing we got a victory in that first conference game,” he said.

Defense has been key for Elon all season, only allowing 40 points in three games against its Football Championship Subdivision (FCS) competition. Overall, the Phoenix is ranked 23rd in the country for scoring defense, allowing 20.3 points per game in the four games played this season.

The team has been led by junior linebackers John Silas and Corey Mitchell, tied for the team lead with 46 tackles each. Mitchell saw the Towson game as a true challenge to the defense and was excited about how he and his teammates responded.

“Teams like Towson, they remind me of my high school days,” Mitchell said. “Where they go, ‘We just run downhill and we’re just going to see if you’re man enough to stop us.’ They were sending two or three at a time to block me, which was frustrating and annoying. But you just [have] to man up and show who is boss and who is going to win.”

After going 0-8 in the league last season, Mitchell felt Elon needed to make its CAA opponents respect the Phoenix.

The defense may need to continue to produce to earn respect around the CAA, but it has definitely earned the respect of the offense, especially from the quarterback, redshirt freshman Connor Christiansen.

“I went up and I was hugging all of [the defense],” Christiansen said. “It’s good when you know you have a really good defense behind you. You can’t get complacent, though — 17 points is, in their eyes, more than enough to win a game, but for [the offense], we need to be shooting for a lot more than that. Can’t really ask for much more than them.”

With each successive week, the defense seems to find a new record to break.

Against Gardner-Webb University, the Phoenix sacked the Runnin’ Bulldogs five times and allowed 13 points in a three-overtime victory, helping make the game the longest in school history.

On Sept. 19, the Phoenix sacked North Carolina A&T State University five times, which followed the five sacks it had at Gardner-Webb. The back-to-back games of five sacks were the most in at least 13 years, since game-by-game statistics were recorded online for Elon.

And last weekend, the Phoenix stopped Towson on six fourth down attempts, as the Tigers went 3-of-9 on fourth down on the day. The previous recorded high was five fourth down stops Nov. 13, 2004 against The Citadel. Head coach Rich Skrosky had anticipated that Towson would keep its offense on the field on fourth down.

“I said this [Friday] night in our meeting, they have gone for it more on fourth down than any other team in our conference,” he said. “Last week [against the College of Holy Cross], they went for it on four situations, two of which were inside the [opponent’s] 30-yard line.”

The Tigers converted two fourth downs on the last drive of the game, but had been 1-of-7 before. For Skrosky, the performance from his defense is nothing new.

“I’m happy for them, but I’m not surprised though,” Skrosky said. “I think our interior defensive linemen get good push inside. And the one they converted, I questioned the spot, to be quite honest with you. I didn’t think it was enough to challenge. I’m really proud of the defense, and we’ll keep it going.”

The Phoenix also forced four turnovers that night, answering the challenge that Skrosky gave the defense.

“We’ve been playing very good [sic] on defense, there’s no question about it,” Skrosky said. “People said, ‘What more can we do?’ So we challenged them to get takeaways. In a game like this, you kind of expect them to happen, and we were fortunate enough to come up with them.”

As the calendar flips to October, the defense will need to find a new goal.

If it can figure out a way to top the month it just had, Elon’s defense may find itself staying at the top of the CAA standings.