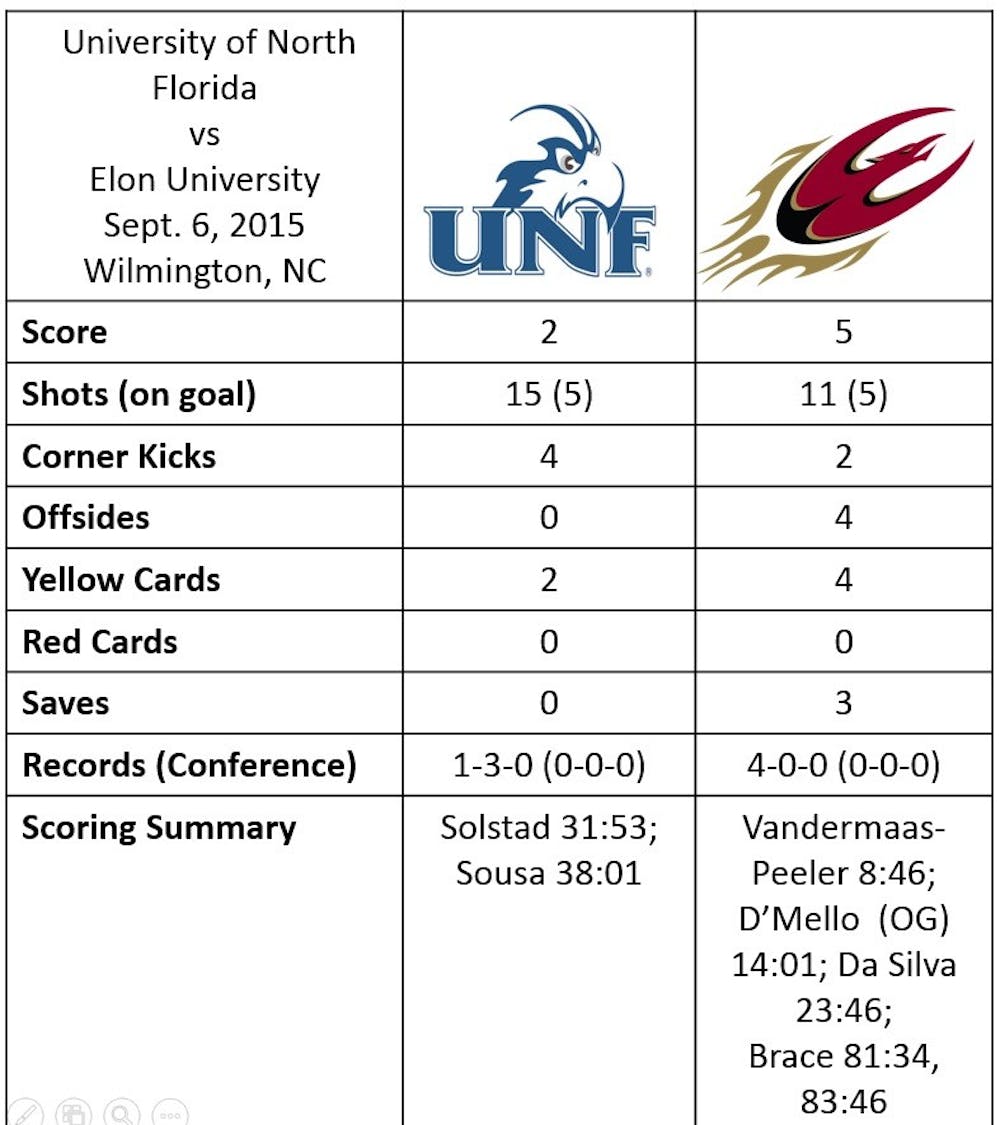 The Elon University men’s soccer team remained perfect on the season after a 5-2 victory against the University of North Florida Sunday. Senior forward James Brace recorded his second multi-goal match of his career, while senior forwards Caue Da Silva and Cooper Vandermaas-Peeler also scored in the win.

The Phoenix found the back of the net with its first shot of the contest. Da Silva played in Vandermaas-Peeler through on goal and the Cary, North Carolina native slotted home his second goal of the year on the breakaway in the ninth minute.

Six minutes later Elon doubled their lead from the help of their opponents. North Florida’s sophomore defender Aidan D’Mello deflected a pass into his team’s net, giving Elon a two-goal lead with just one shot on goal.

The Phoenix found itself in front by three in the 24th minute with their next shot. Da Silva’s long-range shot took a deflection of a North Florida defender and into the back of the net for his third goal of the season.

North Florida pulled one back in the 32nd minute. It took a moment of brilliance to break Elon’s clean sheet streak as junior defender Simen Solstad’s free kick from 22 yards out went past the Elon wall and redshirt freshman goalkeeper Matthew Jegier. The Phoenix defense went more than 300 minutes without conceding a goal to start the year.

North Florida struck again in the 39th minute. Redshirt senior forward Pedro Carneiro received a pass in the box and hit it first time through Jegier’s legs for his first of the season.

North Florida didn’t wait long to search for the equalizer. Redshirt senior defender Casey Caronis’ shot was blocked by the Phoenix defense in the 49th minute. Carniero nearly found his second of the match in the 57th minute, but his shot hit the post.

Brace reestablished Elon’s 3-goal victory with a pair of strikes in the 82rd and 84th minute. Freshman forward Jaiden Fortune provided the assists on each, capitalizing on North Florida turnovers to set up Brace each time.

North Florida were unable to mount a comeback, and wrapped up their weekend in Wilmington with a pair of defeats having lost to the University of North Carolina at Wilmington 5-1 Sept. 4. The two losses drops North Florida to 1-3 on the year.

Elon remains a perfect 4-0-0 to start the year with the win. Elon will finally return to Rudd Field for their home opener at 7 p.m. on Sept. 12. to face former Southern Conference rivals Davidson College.