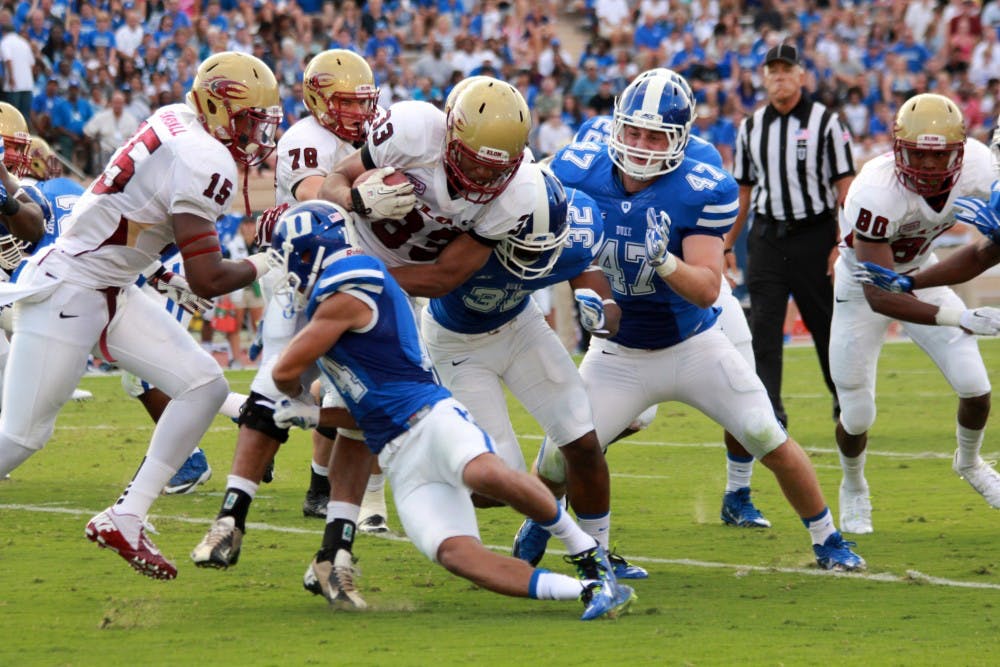 No, you’re not reading that wrong.

According to Rich Skrosky, head coach for the Elon University football team, the mindset going into the Thursday night season opener against Wake Forest University makes Thursday a Saturday.

“In post-practice, we talk a lot about how tomorrow is, to a lot of people, Sunday,” Skrosky said after Saturday’s practice. “But in Wake’s world, and Elon’s world, it is Tuesday.”

The day of the week means a lot for this game, which is the first midweek game for the Phoenix since 1995, when West Georgia came to Burlington and beat Elon 35-16.

For Skrosky, midweek games are nothing new – he spent three years in the Mid-American Conference (MAC) as the offensive coordinator for Ball State University. MAC teams often play games on Tuesdays and Wednesdays in November, and the Cardinals had five such games during his time there.

“One of the benefits about going to Ball State is knowing how to deal with the midweek games,” Skrosky said. “Now we can get the team to understand how that, yeah, it is Sunday, but it is a workday, like a Tuesday.”

The game in Winston-Salem is Thursday, which makes the message in the football program clear: Today is Friday. Get ready for a Saturday night kickoff.

This game will be the 11th matchup for the schools, with Wake Forest holding the 9-0-1 edge. But, Elon will travel I-40 to Winston-Salem to take on the Demon Deacons for just the second time in school history.

The two schools faced each other eight times in the 1920s, with seven in the town of Wake Forest. The Demon Deacons won seven of the eight matchups. The eighth was a 0-0 tie in 1927.

The last time these two schools met before World War II was in 1939, with Wake Forest shutting out Elon 34-0 in a neutral site game in Greensboro. After the 1939 matchup, they would not converge on the football field again for 70 years.

When the football programs finally reacquainted in Winston-Salem in 2009, Wake Forest emerged victorious, 35-7. Skrosky was the offensive coordinator for Elon at the time.

Entering his final season of collegiate eligibility, Wright is one of the only players at Elon who has played in games at the Football Bowl Subdivision (FBS) level, because he transferred to Elon after only playing in two games in three years at Rutgers University.

“The biggest stadium I’ve ever played in was at the University of Arkansas in Fayetteville, Arkansas,” Wright said, recalling his previous university’s Sept. 22, 2012 victory over the Razorbacks in front of 72,543 people.

For many of the Elon players, especially the freshmen, playing in front of a large crowd in an Atlantic Coast Conference stadium would be their largest audience ever. It is on upperclassmen and FBS transfers to try to prepare their younger teammates for the environment. Wright is both, and understands the perspective he provides.

“They [the underclassmen] need to understand the stadium or crowd doesn’t really mean much,” Wright said. “At the end of the day, we run those one-tens by ourselves. We wake up at 6 a.m. by ourselves.

“I told them to focus on blocking the noise out and just go play ball, and just keep doing what we’ve been doing all camp.”

Though Wake Forest seems to have a set quarterback, Skrosky says he feels the Phoenix and Demon Deacons are extremely similar. Sophomore John Wolford is the returning starter, but freshman Kendall Hinton took snaps with the second team in the spring game.

“[Wake Forest] has an incumbent from last year,” Skrosky said. “But everything you’ve heard – and I guess, with us being 50 miles away, I know the kid from Southern Durham and I know what that staff thinks of him – let’s just put it this way: I’m not going to be shocked to see him on Thursday.”

Beyond the quarterback position, Elon and Wake Forest are similar in the way the rosters are constructed.

“When you look at their depth chart, they have more freshman on it than we do, especially on the offensive side of the ball,” Skrosky said. “There’s a lot of familiarity with the staff, and I think you’re going to see a lot of young guys [playing for] Wake.”

With kickoff happening tomorrow, there is still no decision as to who will start at quarterback for Phoenix.

“It’s obvious that neither one of those guys has totally separated themselves,” Skrosky said. “Otherwise we would have named a guy already. As I’ve told everybody, I couldn’t think of two better kids to have represent this program than Connor [Christiansen] and Daniel [Thompson].”

The decision time is still to be determined, and Skrosky acknowledged that there could be an element of gamesmanship to it.

“It might be after Tuesday’s practice, and then, if it’s that late, we might go right up to game time with it,” Skrosky said. He also said that the media “might ask me, ‘Is it out of the question that both of them will play?’ They might. They truly might. They’re not completely different guys, but there are some characteristics that Connor has that Daniel doesn’t and vice versa.”

For junior running back B.J. Bennett, who will be a team captain for the game, the two quarterbacks have more similarities than people would assume.

“They’re both instinctual. They make plays that I didn’t think they were going to do,” Bennett said. “They make those plays naturally, and they both are good leaders.”

As a running back with experience, Elon will be counting on Bennett to help the new starting quarterback’s transition to collegiate football.

“They both can play, so I’m ready with whoever they put out,” Bennett said. “I know they will lead the team.”

Skrosky hasn’t lost sight of the humor in the lead-up to the game, especially when it comes to naming his quarterback.

“Well, somebody has to walk out for the first play,” Skrosky said. “I guess we’re going to name one by then.”