Defense wears down in blowout at Wake Forest 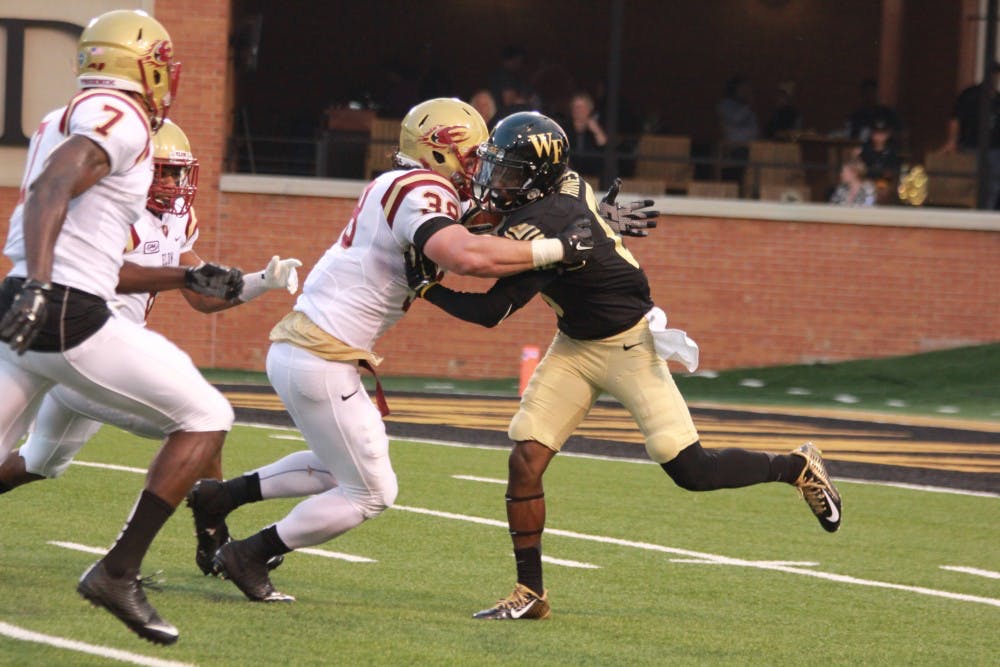 WINSTON-SALEM – After one quarter of play for the Elon University football team, the defense was standing tall against the Wake Forest University offense, allowing just three points.

But the Demon Deacons had possession of the ball for 9 minutes and 33 seconds in the first, and the amount of time spent on the field came back to haunt Elon’s defense in the second quarter.

“If we want to be a dominant-style defense, we have to do it for 60 minutes,” head coach Rich Skrosky said. “I think we maybe lost our discipline, lost our focus, our tackles missed went up as the game went up.

“Is that a sign of fatigue or a sign of a lack of focus? We got to keep playing the same way for 60 minutes.”

Junior linebacker Corey Mitchell feels like the amount of time on the field in the first quarter fatigued the defense in the second.

“I think a couple of [the defenders] wore down,” Mitchell said. “Our technique wavered. When you’re like that, and its close, you got to keep your foot on the gas. I felt like we took it off, started pushing the brakes a little bit. That’s when the missed tackles came, and everything came.

For the Phoenix, this was its fourth straight year in which they lost to an Atlantic Coast Conference (ACC) opponent to start the season. The bright side of that perspective is that 41 points is the fewest allowed to an ACC opponent in that stretch. For Demon Deacons head coach Dave Clawson, though, tonight's final score was satisfying enough.

"In a game like this, I think you expect to win, but you also want to execute at a high level,” Clawson said. “To me, that's what's encouraging about the game. I thought on defense we executed at a high level. On offense, we made explosive plays, which was one of the things we needed to happen. ... Overall, it was a good opening night."

The first quarter was a defensive showcase, as both offenses looked stagnant. The only points scored came on a Mike Weaver 28 yard field goal.

In the second quarter, however, Wake Forest scored three touchdowns, with none bigger than a 70 yard run from quarterback John Wolford. Wolford was 20-27 for 323 yards and 3 touchdowns on the night.

Elon’s only scoring came in the 3rd, when John Gallagher drilled a 45-yard field goal. Immediately after Elon’s score, Wake scored two touchdowns on quick, long drives to put the game out of reach.

The offense never truly got into any sort of rhythm for the Phoenix, as Skrosky flipped back and forth between his quarterbacks.

True freshman Daniel Thompson got the start, but redshirt freshman Connor Christiansen ended up with more series played, as he had seven to Thompson’s five.

After 60 minutes of live game action, Skrosky isn’t sure what he learned about his two potential starters.

“I don’t know if we learned a whole lot,” Skrosky said. “That’s the reality of it.”

For Thompson, his first experience as a collegiate athlete did not go according to his plan.

“Personally, I think I played very poorly,” Thompson said. “I think, as an offense, we shot ourselves in the foot a lot. We’d get a 10-yard gain, then a 15-yard penalty.

“I don’t think they were that much of a better team than the score showed. We knew everything they were going to do defensively. From an offensive standpoint, we didn’t execute well at all.”

Skrosky said the plan was always to play both quarterbacks, but Daniel got the start because he had more control going into the game. However, after the game, Skrosky singled out Christiansen’s mindset.

“I will say that I was pleased with what Connor did,” Skrosky said. “Coming into that fourth series, he had good composure about him. He had a calmness about him. I think he did okay.”

Skrosky did not name a starter for next week, but he was asked if he intended to have a single starter in the future.

The standout players on defense were Rob Sullivan, who had two sacks tonight, and was led by Chris Blair, who led the team with 13 tackles and 11 solo tackles.

“When a safety makes that many tackles, it’s not good,” Blair said. “Especially solo tackles, as most of my tackles should be assists.

“We got to get better on defense, and at the same time, the game is slowing down to me, so I am reacting a lot faster.”

Blair, who is a Winston-Salem native, got to play in front of his father for the first time in his life tonight, as profiled by Adam Smith of the Burlington Times-News this past Sunday. After the game, Blair admitted his anxiety was higher than normal.

“It was a combination of first-game jitters and my dad,” Blair said. “With him being here, it knocked [the anxiety] up a little bit more.”

The Thursday night game this week will give Elon two extra days to prepare for their next opponent, Gardner-Webb University.

The Runnin’ Bulldogs do not start their season until Saturday night. They will be in Mobile, Alabama to take on the University of South Alabama at 6 p.m.

The Phoenix will travel to Boiling Springs to take on the Runnin’ Bulldogs, with kickoff scheduled for 6 p.m. Saturday, Sept. 12th.