Make it and break it 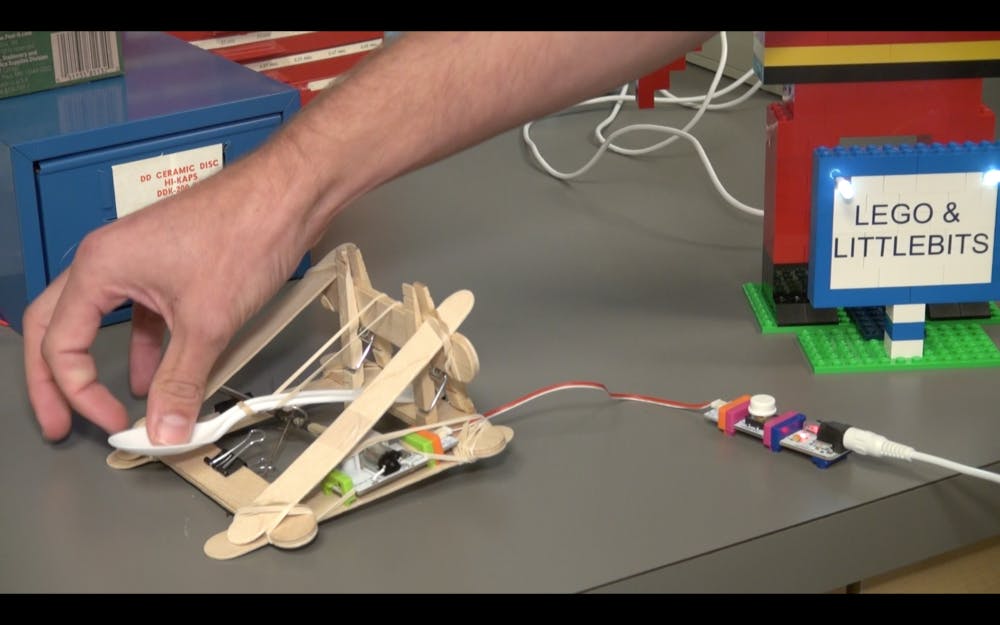 The 21st century introduced us to 3D printing and the Elon campus is being imprinted with much more than new technologies.

"This is a space where it's okay to fail," said Instructional Technologist Michael Vaughn. "It is expected that you will fail repeatedly and that's not a bad thing."

Maker Hub is a new place for creators who like to tinker technology. Talks of creating a center devoted to science, technology, engineering and math began in October 2013, but it wasn't until this summer that the Hub took over the old study hall space in Harper Hall. The Colonnades E location allows students and staff from all over campus  to innovate and learn in a hands-on environment.

"We're trying to create a culture of making, a place where people can feel comfortable coming up with an idea, figuring out what they do and don't know, learning more and making the project a reality," Vaughn said.

There are two 3D printers where you can design your own objects on the computers provided within the Hub. Tiny computers allow people to fiddle with the inside components to learn more about programming. Electronics range from having soldering supplies which allows a person to join alloy metal together, to littleBits which are electronic modules that connect together via tiny magnets.

App Development can be tested on old smart phones and iPads and e-Textiles and fabrics offer conductive and regular threads, micro controllers that can be sewn into fabric and washed later where you just have to take out the battery.  You can incorporate lights and buzzers as an added bonus.

Through the power of Google cardboard you can take a smartphone and have virtual reality in the palms of your hands. For the low cost of five dollars the cardboard goggles allows you to experience Paul McCartney live in virtual reality performing at a concert.

Makers at the Hub are no professionals though, just learners who are developing more than just their technical skills.

"This whole environment was very new to me when I first came in. and so most times we get comments like 'oh you're an engineer you're going to know all this,' but i had no idea and i was just as nervous," Maker Hub student staffer Zach O'Connor said.

O'Connor is a junior biomedical engineering major who arrived in mid-July. He's been creating since the Hub opened on August 25 and hasn't stopped since.

"When you have a project idea you run after it full steam you try and make it happen, even if it turns out a total failure, we just want you to finish your project. we want you to persevere through," Vaughn said.

For O'Connor it's about the challenge of figuring things out.

"You can't be afraid to make mistakes that's the other thing, and failure. That's how we learn," O'Connor said.