Women's soccer hopes to put past behind them 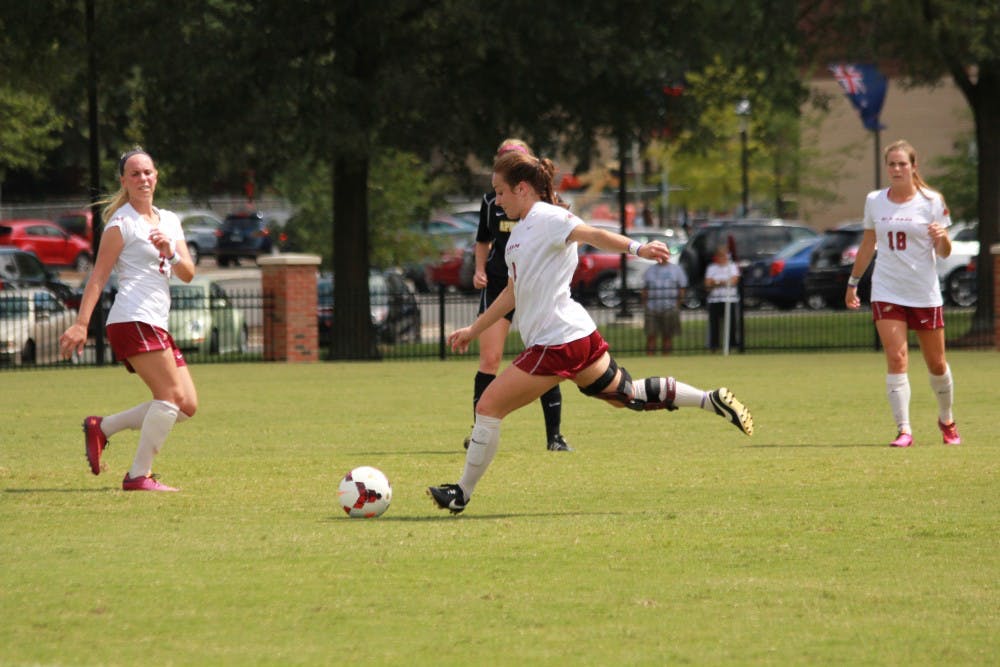 The 2014 season was, as head coach Chris Neal put it, a “perfect storm” of bad things happening to the Elon University women’s soccer team. The result was a 5-12 record, including a 1-8 record in Colonial Athletic Association play.

The Phoenix lost five projected starters before the season even started, losing another shortly before conference play began.

“From a personnel standpoint, 2014 was incredibly difficult,” Neal said. “Now you compound all of those variables with the fact that we’re moving into a league that is a top-ten women’s soccer league … it was an interesting year for us.”

Since the season ended 10 months ago, the team has been working to improve its chemistry, fitness, and individual skill sets to prepare for its second season in CAA play. The team traveled to Costa Rica during spring break, playing the U20 Costa Rica national team in addition to running clinics, playing friendlies and immersing themselves with the other Elon students that were studying abroad in Costa Rica at that time.

“Ever since we lost our last game and that was over, we put that season behind us,” said senior defender and Captain Mel Insley. “Starting in November, we immediately went right into training and preparing for this upcoming season. There has been huge culture change with our team. Everyone is exactly on the same page, everyone wants to win and everyone is willing to put in whatever work they need to do to get to that point as a team.”

It helps that some of the projected starters that were out for last season are back and fit. Juniors Kelly Siewers and Alexis de Groot, projected starters as central midfielders last season, each sat out the majority of the 2014 campaign (Siewers was held out after a concussion, and de Groot tore her ACL).

There are also two sophomores, Amanda Lasater and Molly Gradle, who were projected to play an integral role in the Phoenix defense. During the summer before the season began, Lasater and Gradle each had ankle surgery, ruling both of them out for the season. Even though neither has played a minute on the field, they are strong candidates to receive significant playing time on the back line.

There was also a lot of offense to replace in 2014, which is not the case this season. Last season, the team had to replace 27 goals scored by the class of 2014. This season, the team is losing one goal, returning all other scorers from last season, led by sophomore forward Grace Bennett, who was named to the CAA All-Freshman Team last season. But, Bennett knows that her efforts alone are not enough.

“We need that [scoring] in order to be successful,” she said. “We need more goals than we had last year in order to make it to the conference championships. An important goal for me is to have more goals than I did last year, and I think setting individual goals like that is extremely important for the whole team’s success this year.”

There are four captains on this year’s team, seniors Sam Burch, Taylor Glenn, Insley and de Groot. As one of seven seniors on the roster, Insley is aware of the challenge put before the team, and has confidence in the leadership abilities of the senior class.

“I think that all of us are on the same page, and we’re all willing to push each other to whatever limit that means,” she said. “We’ve overcome a lot of adversity and challenges and everything that has brought us to this point, and so I think that we’re ready to unleash everything we’ve put into this for the past three years and really just look for success and find that.”

There are also plenty of incoming freshmaen that have impressed Neal.

“We’re not putting a lot of pressure on our freshmen, but we’re definitely expecting them to be able to contribute right away. We’re looking to sprinkle them in to complement a very strong returning core,” he said.

The team is experimenting with some changes this year. There will be a new goalkeeper and different formations styles. The organization of Elon’s 11 starters will “definitely have a new look,” according to Neal.