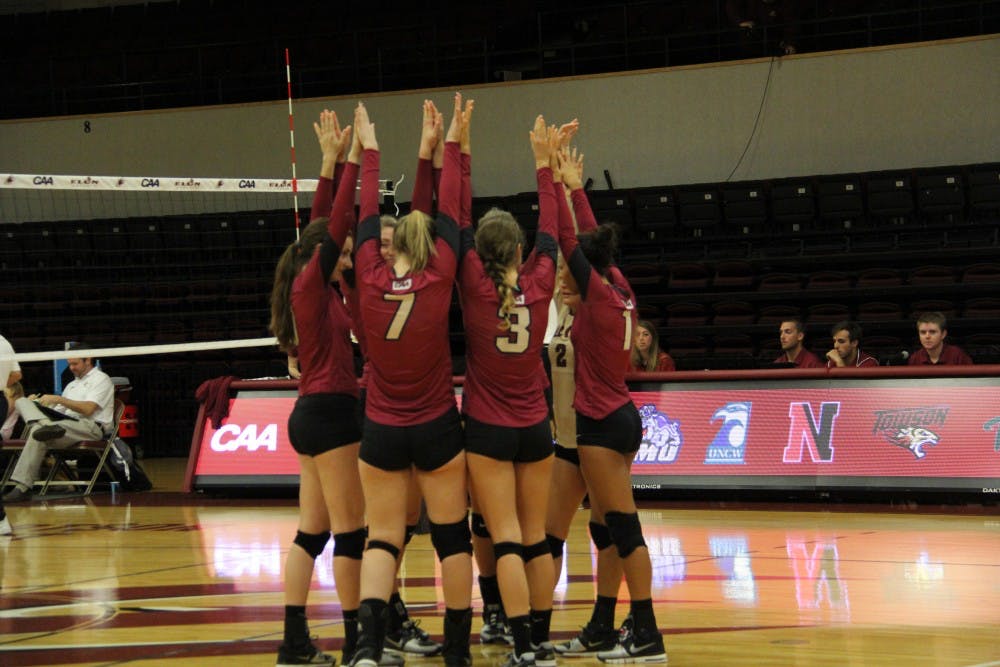 The transition to the Colonial Athletic Association (CAA) has been a mixed experience for Elon University thus far. Some programs have experienced more success than others. For the volleyball team, the conference change has instilled a cutthroat desire to succeed.

The Phoenix, which finished 6-26 (1-15 in CAA) in its first year of CAA play, is on the upswing. Mixing a crop of six new players with some key returning veterans, Elon is poised to rise in its second CAA campaign.

There has been a competitive spirit in the air since the preseason opened Aug. 10. Players new and experienced alike have been vying for a chance to start. According to head coach Mary Tendler, the returners put in extra work during spring workouts to stay sharp for the arrival of their new teammates.

“They’re really competing hard for positions right now,” she said. “We have a lot of depth on the team. That’s been the most exciting thing for me, just to see them compete against each other.”

The depth is anchored in the six returning upperclassmen on the team, who have more than 280 starts at Elon. That experience has helped lessen the learning curve for the many new Phoenix players.

Key members from last season will return to action this year for Elon. Junior defensive specialist Morgan Maner led last year’s team in digs and aces, while senior setter Ana Nicksic led the way in assists. Sophomore outside hitter Sydney Busa was named to the CAA All-Rookie team, as well as being named Co-Rookie of the Week Oct. 6.

The first few weeks of the preseason are vital, as the players must build a rapport in a short time.

The team’s chemistry has taken shape quickly. There is a willingness to learn and to teach, even in the midst of establishing a starting lineup. And on a team of 15, it is vital.

“I think we’ve meshed well so far,” said senior outside hitter Megan Gravley. “It’s pretty rare on a team of 15 girls to get along so well.”

Tendler has made it clear that the team isn’t going to focus on the past – only on learning from mistakes and growing as a unit. It’s an attitude that her players share.

Despite finishing 1-15 in conference play last year, the Phoenix learned from its mistakes. Each game was an opportunity to see an all-new opponent, and returning players have kept track of the strengths and weaknesses of each team.

There wasn’t necessarily a weak point on the Phoenix, either. Elon was consistent in each aspect of the game, which is something it hopes to carry over into this season.

“We take away the knowledge of each team,” said junior outside hitter Kayla Agae. “We can go back in our memories and be like, ‘Ok, I remember these strengths and these weaknesses about each CAA team,’ and from there we can apply it with the newcomers.”

Elon kicks off the season by traveling to Radford, Virginia, to compete in the Radford University/Virginia Tech Invitational. The team plays its first game Aug. 28 against Washington State University. Home games begin Sept. 4 with a bout against Charleston Southern University, and CAA play begins Sept. 25, when Elon travels to Boston to take on Northeastern University.

Expectations are high. With the new arrivals finding their place on the team, the Phoenix is prepared to make an impact this season.

“Mentality-wise, it’s just an open mind,” Agae said. “It’s a new season, and we have six new girls – five freshmen, one transfer. It’s kind of a big lineup coming in.”

As the start of the season looms, the Phoenix is focusing on getting a few more victories than last year.

“[We’re] just looking forward to preparing conference season with our nonconference schedule,” she said. “We have a lot of players that are just ready to go. It’s going to be fun to start playing against some other teams.”